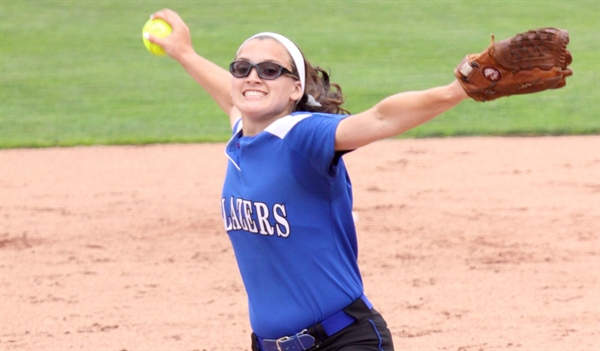 A year ago, the then-freshman Price pitched the Blazers back to the MHSAA Division 2 Semifinals. But this spring hardly began the way she and Ladywood expected – the Blazers started 8-8, and as recently as May 17, Price walked 17 batters over just more than five innings in the Detroit Catholic League championship game.

Coach Scott Combs said there was a stretch when he didn’t feel he could put his ace in the pitching circle. But he never gave up on her.

“I was struggling a lot in the beginning of the season. My confidence was not there,” Price said. “I’m so thankful having my team behind me, cheering me up after every pitch. Whenever I get down, they always try to pick me up.

“Coach Scott worked with me a lot. He said, ‘Just calm down; just stay focused on the batter, and you’ll be fine.’”

Confident again, Price made a number of gutsy pitches Thursday to lead Ladywood back to the Division 2 Final with a 4-3, 10-inning win over top-ranked Wayland at Secchia Stadium. The No. 7 Blazers (29-13) will face No. 4 Stevensville Lakeshore in Saturday’s championship game at 9 a.m.

Price walked only two batters in the Semifinal and struck out six, including Wayland’s leadoff hitter with bases loaded and her team up 2-1 in the sixth inning. She also stranded a Wildcats runner on third base in the bottom of the ninth.

It was a far cry from her early-season struggles and 12 losses that became more forgettable with Thursday’s win.

“She could not throw a strike, and we worked and worked psychologically to get her to relax,” Combs said. “She was trying to muscle everything, trying to blow it by everybody. … She’s got all the ability in the world, and she’s a great hitter too, but she just needed to learn to focus and relax, and she did.”

Price did hit as well, doubling in her team’s first two runs. Sophomore rightfielder Rachel Hendrickson, batting ninth, tripled in junior Morgan Larkin in the seventh inning and then scored the game-winner in the 10th on senior shortstop Haley Lawrence’s single.

All three were in the lineup last season when Ladywood fell 8-0 to Tecumseh in a Semifinal. Tecumseh went on to win the championship.

This was Ladywood’s fourth straight trip to the Semifinals, and Saturday’s championship game will give the Blazers the opportunity to win their second title in three seasons – although the lineup is almost completely different than the one that won two years ago.

“It’s just crazy, the difference in the team last year to the team this year,” Price said. “I myself, I feel like I had a lot more confidence in this game than I did last year, or even in the games at the beginning of this season.”

The Wildcats finished 42-2. Click for the full box score.

A couple things annually are expected from the Stevensville Lakeshore softball team: The Lancers will win at least 30 games and contend for the Division 2 title. 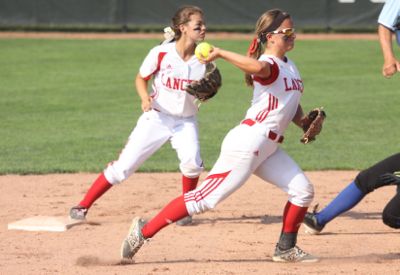 They won their 30th game this season in the District Final. And they’re back in an MHSAA championship game – even if they didn’t feel the same outside expectations this spring after a rough start.

“Our first game we lost to Edwardsburg, and we’re like, ‘Oh man.’ Portage Central beat us five out of six times,” Lakeshore senior pitcher Haley Thibeault said. “We didn’t start at the top like we have been. We started at the bottom and literally just shot up. We peaked exactly at the right time.”

The Lancers (35-9) kept the tournament momentum rolling with five runs in the first inning against Croswell-Lexington. They pushed the score to 6-0 in the fifth inning.

Croswell-Lexington (30-2) showed plenty of sparks scoring a pair of runs in both the sixth and seventh innings – but was a hit or two short in both of turning the tide completely.

Junior pitcher Megan Guitar had two hits and scored a run for the Pioneers. Senior shortstop Kylee Barrett drilled a home run in the seventh inning.

Lakeshore’s return to the championship game is its first since winning back-to-back titles in 2010 and 2011.

“Everyone has been saying we’re not as good as last year’s team, or our team is young. (You don’t like) to hear that because we want to go as far as we can,” Haley Thibeault said. “I’m so proud because we’re defying all the odds to come this far. Maybe it doesn’t seem like that to other people, but it’s internal victories to us, moral victories.”