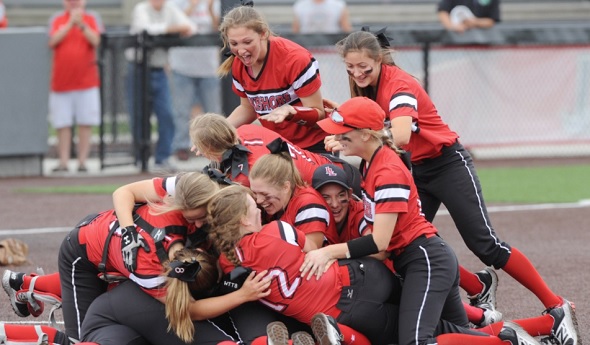 Monroe St. Mary Catholic Central is playing for its third straight Division 3 title, while Richmond is looking to repeat in Division 2. And while last season’s Division 1 and 4 champions did not advance to this weekend, last year’s runners-up did – Macomb Dakota and Indian River Inland Lakes, respectively – with both seeking the first MHSAA softball titles in their schools’ histories.

Tickets cost $8 per round and include admission to baseball games those days also at MSU’s Old College Field. Radio broadcasts of all games can be heard online at MHSAAnetwork.com. All games will be streamed live online at MHSAA.TV and viewable on subscription basis. Click to order tickets in advance and for a parking map.

MONROE ST. MARY CATHOLIC CENTRAL
Record/rank: 25-3, No. 1
Coach: John Morningstar, third season (90-13)
League finish: First in Huron League.
Championship history: Two MHSAA titles (most recent 2016), three runner-up finishes.
Players to watch: Meghan Beaubien, sr. P (20-1, 0.49 ERA, 302 K in 145 2/3 IP, .444 hitting, 11 2B); Kenna Garst, jr. C (.483, 28 R, 13 2B, 30 RBI); Kelsey Barron, jr. SS (.455, 33 R, 27 RBI); Abbey Johnson, soph. OF (.434).
Outlook: Beaubien again is arguably the most highly anticipated standout taking the field this weekend as she tries to finish her high school career by leading her team to a third straight Division 3 title before going on to University of Michigan. The all-state pitcher has been nearly untouchable again, giving up only 46 hits this spring entering this week while the Kestrels have outscored their six postseason opponents by a combined score of 44-1. She and centerfielder Grace Mikesell are the team’s only seniors. St. Mary shut out No. 2 Grosse Pointe Woods University Liggett 5-0 in the Quarterfinal.

INDIAN RIVER INLAND LAKES
Record/rank: 33-5, No. 1
Coach: Krissi Thompson, 15th season (record N/A)
League finish: First in Ski Valley Conference.
Championship history: Division 4 runner-up 2016.
Players to watch: Cloe Mallory, sr. P; Precious Delos Santos, soph. OF; Pamela Braund, sr. C; Vanessa Wandrie, sr. IF. (Statistics not submitted.)
Outlook: A season after making the championship game for the first time, Inland Lakes has been the favorite to finish the run and justified that top ranking. The Bulldogs have outscored six postseason opponents by a combined 75-3, including No. 4 Rogers City 11-1 in the Quarterfinal. Mallory made the all-state team last season, and the entire hitting lineup is back from the 1-0 Finals loss to Unionville-Sebewaing.

OTTAWA LAKE WHITEFORD
Record/rank: 32-6, No. 8
Coach: Kris Hubbard, 39th season (812-362)
League finish: First in Tri-County Conference.
Championship history: Three MHSAA titles (most recent 1987), two runner-up finishes.
Players to watch: Erin Manley, sr. CF (.470, 55 R, 13 2B, 7 HR, 55 RBI); Lindsey Walker, soph. P (27-5, 1.50 ERA, 241 K in 242 IP, .384 hitting, 11 2B, 36 RBI); Karsyn Berns-Moore, soph. SS (.373, 47 R, 14 SB); Alyssa Granata, sr. C (.407, 40 R, 9 3B, 31 RBI).
Outlook: After getting back to the Quarterfinals for the first time in nearly a decade last year, Whiteford has taken another sizable step returning to the Semifinals for the first time since its Class D runner-up season of 1994. Manley was an all-stater last season, and Walker earned honorable mention. They are part of a foundation that has brought excitement back the last two seasons but also could add more over the next two – Manley, Granata and rightfielder Victoria VanBrandt are the only seniors, while the rest of the roster is freshmen and sophomores. Whiteford avenged last season’s Quarterfinal loss by beating No. 2 Unionville-Sebewaing on Tuesday after also earning tournament wins over honorable mentions Morenci and Waterford Our Lady.