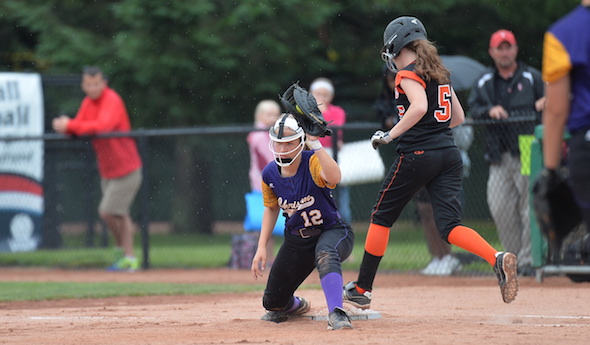 EAST LANSING – With many of the players having graduated that helped lead Kalamazoo Christian to MHSAA Finals the past two seasons, Comets coach Terry Reynolds never expected his young Comets to be back this spring.

That’s exactly where the Comets have arrived, however, earning their third straight trip to the Division 4 Final by defeating Hillman 13-2 in five innings at Secchia Stadium on the campus of Michigan State University.

“At the end of the basketball season, I was wondering what we were going to do this season,” Reynolds said. “This is surreal. I never expected it. On March 9 when the season started, I was not sure of what we had. Now, I’m very proud of these girls.”

Kalamazoo Christian (29-14) will face Unionville-Sebewaing (37-3) in the Final at 3 p.m. Saturday. The Final will be Christian's 11th; it has played in the most championship games in MHSAA softball history.

The Comets didn’t just earn a trip to the title game; they slugged their way to the Final scoring in all four innings, highlighted by a seven-run fourth that blew the game open.

Up 6-0 going into the bottom of the inning, their already-hot bats turned blistering. Kalamazoo Christian reeled off eight straight hits during the inning in putting seven runs on the scoreboard.

The inning began quietly enough when junior Brooklyn Block led off with a bunt single. After a sacrifice bunt by junior McKena Razenberg, the floodgates began to open. Sophomore Monica Locker, one of eight sophomores on the Comets’ roster, doubled to plate Block. Junior shortstop Kara Gjeltema then followed with a RBI single.

One of few veterans who returned this season, Gjeltema has been a hitting standout the past two seasons, and this year entered the Semifinals with a .541 batting average and 66 RBI. Gjeltema added to that total with two hits and three RBI.

A catcher last season, Gjeltema moved to shortstop this spring.

“We had four shortstops in the spring,” Reynolds said. “Kara has a rifle for an arm, and I wanted someone who is fearless and Kara would run through a wall for you.”

Sophomore Aliyah Lemmer followed Gjeltema in the batting order and added a single to keep the fourth inning going. Lemmer also drove in the first two runs of the game for the Comets with a two-run double in the bottom of the first inning.

Along with supplying offense, Lemmer was also Christian’s starting pitcher and in charge of silencing the Hillman bats. Lemmer did just that, as she allowed one base runner during the first four innings before giving up a pair of runs in the fifth.

Lemmer backed up last year’s staff ace Rebekah VanDam and took over the mantle of top thrower for a program long known for producing quality pitchers.

“The first inning I was pretty nervous,” Lemmer said. “Seeing all the fans and everything, I was nervous but then I settled down after getting the first three outs.”

Lemmer allowed three hits and no walks while striking out two over five innings.

Eight of the nine hitters in the Comets starting lineup collected at least one hit, and all but one of the nine scored a run.

I was up until four in the morning watching tape on Hillman,” Reynolds said. “I told the girls to stay off the high pitch and make her come down. The girls were patient and did that. We had some opportunities, and the girls took advantage of it.

“Nothing will surprise me at this point,” Reynolds added. “The girls say that we are a family and they will keep battling and keep pushing no matter who we play.”

With the way USA junior pitcher Nicole Bauer performed, and the way his hitters performed in the clutch, any advice from Izzo wasn’t needed this time as the Patriots handed Holton (37-1) its first and only loss. 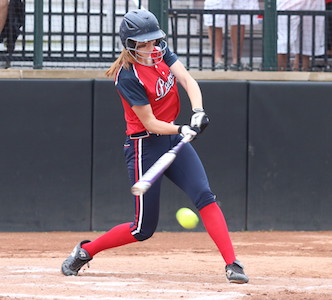 Bohn, in his fourth season at Unionville-Sebewaing, has brought the Patriots to the Semifinals the past three years, getting his team into the Division 3 title game the past two years. This spring, playing in Division 4, the Patriots will play on the final day again.

“We’ve been down here for the fourth time now,” Bohn said. “I saw Tom Izzo earlier and I wanted to ask him how he does it.”

Having a pitcher like Bauer helps. Bauer gave the Patriots an outstanding pitching performance as she scattered four hits and allowed one walk over seven innings. Bauer also struck out 11 Holton hitters.

The Patriots also had some timely hitting. With two outs in the bottom of the fourth inning, Bauer helped her own cause when she reached on a double. Senior Erica Treiber followed with a single that plated pinch runner Lauren Adam with the first run. Senior Madison Zimmer then gave the Patriots some breathing room with an RBI single that scored Treiber.

“We like to score with two outs,” Bauer said. “We go up there thinking we have nothing to lose when we have two outs.”

The Patriots added another two-out run in the fifth inning when Kayla Gremel hit a two-out double that plated Sara Reinhardt. Unionville-Sebewaing added an insurance run in the sixth inning on an RBI single by Katie Engelhardt.

“We just hope to execute and get it done tomorrow,” Bohn said.