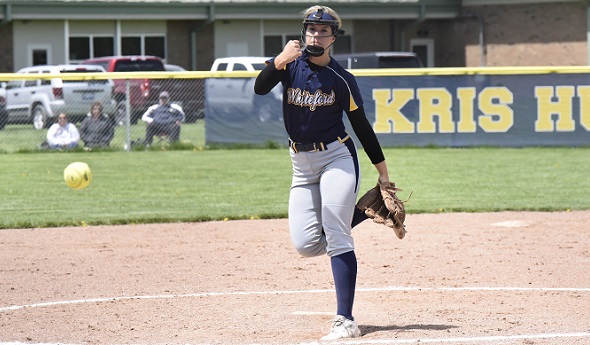 Walker is one of seven seniors on a 20-3 Bobcats softball team that has climbed to No. 2 in the coaches association Division 4 rankings and is a win away from clinching its second Tri-County Conference title in three years.

The pitching ace began learning the finer points of fast-pitch softball from veteran Whiteford coach Kris Hubbard when she was in the second grade.

“I would come in the mornings for pitching lessons,” Walker said. “I’d show up before school, we’d go in the high school gym while she was coaching JV girls basketball. She’d walk back and forth and teach me how to pitch at the same time.

“She taught me the basics, how to warm up and some of the mechanics of pitching. It was all new to me then.”

With Hubbard’s help, Walker has blossomed into a star in the circle for the Bobcats. She’s already holds Whiteford career records for games pitched, decisions, innings-pitched and wins (82) and she’s within a couple starts of setting the Bobcats’ record for strikeouts. She’s also an outstanding hitter and has made a remarkable impact on Whiteford’s hitting record book, too. She is the Bobcats’ all-time leader in at bats, hits, doubles, RBI and home runs.

Besides pitching mornings for Coach Hubbard, Walker began playing travel softball at a young age. When she was still in elementary school, Hubbard invited her to be a manager for the varsity. It’s a time-tested method for Hubbard, who has coached the Bobcats for all 41 years of its softball existence. She brings on multiple managers to begin training them for the varsity squad at a young age. By the time they reach the varsity as a player, they are engrossed in the program, knowing the ins and outs of how things are done the Bobcat way.

Walker has been solid all four of her seasons in the circle, but there was a time when she considered giving up pitching.

“I was in the fifth grade, and I was about to give up pitching,” Walker said. “I couldn’t throw a strike. Everything was crazy. She just told me to keep going and that I would get my location, and my accuracy was going to come with time. She pushed me.”

Walker batted .429 as a freshman and hit .371 as a sophomore when Whiteford reached the Division 4 championship game. She hit .513 last year with eight home runs and 14 doubles. The Bobcats made it to the Quarterfinals. Although she won 15 games as a freshman pitcher, it was her sophomore year in which she showed her dominance – winning a school-record 29 times. 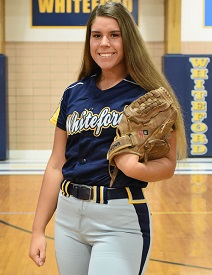 Walker recently committed to play in college at Ave Marie University in Florida. She wasn’t sure she wanted to pitch in college until just before this softball season began and she realized if she didn’t, this would be her final season of the sport.

This season the Bobcats have steadily climbed up the state rankings as the senior-laden team looks to embark on yet another tournament run under Hubbard. The Whiteford coach already has announced this year will be her final one as the Bobcats’ head coach. She has more than 855 wins and three MHSAA Finals championships with six title game appearances during her career.

Senior Karsyn Berns-Moore leads the team with a .561 average and has six triples. Baylee Baldwin is hitting .455 with 36 runs scored, and Milly Iott is hitting .434 with 10 doubles and 27 RBI. Pinch-runner deluxe Anna VanBrandt has scored 35 times, one off the team lead, despite having just eight at-bats.

“You can do so much with speed,” Hubbard said.

In the circle, Walker is 15-3 with a 1.62 ERA and 116 strikeouts in 95 innings pitched. She’s also hitting .434 with six home runs and 36 RBI. Other seniors on the team include Madison Durden, Jessica Link and Katie Lipp. All seven seniors on the club’s roster are four-year regulars.

“It helps when you have so many former head coaches,” Hubbard said. “We are really hitting the ball this year.”

Hubbard said the seniors are still trying to get better.

“This whole senior class always wants to get better,” she said. “You usually don’t have that. Usually kids lose interest over the year. Even now, those seniors, when I send out a text saying what day I’m going to be at the school, my phone blows up. They know. They still want to get better. They’re not going through the motions. They are working on the batting tee or the catch net. They are driven, and they keep getting better. It’s nice.”

Walker said Hubbard never forgets to tell her players – and dugout full of managers – to have fun.

“She teaches you a lot about life and softball,” Walker said. “She lets you develop your own skills, but she pushes you. Some coaches just want to win. She always wants us to have fun first.”