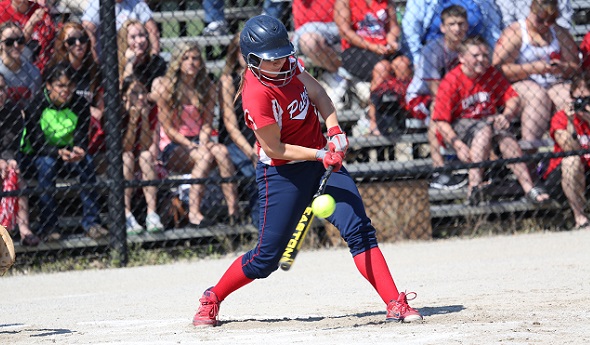 BATTLE CREEK — Tradition perpetuates itself in small kids who looked up to the big kids as heroes.

"I wanted to be just like her and get to my state championship," said Katie, a second-year varsity player. "I was here every year. I knew that one day I wanted to be here. That was my dream."

The Patriots are going to their fifth MHSAA championship game in the last eight years, in part, because of a tie-breaking single by Gremel in the sixth inning of a 4-3 victory over Holton on Friday at Bailey Park. They will play first-time finalist Dundee at 10 a.m. Saturday at Bailey Park.

With the game tied 2-2, Gremel hit a sharp single up the middle that hit the glove of pitcher Rachel Younts and just eluded the grasp of second baseman Katie Wildfong. Breanna Dinsmore, who singled and was bunted to second by pitcher Erica Treiber, scored on the play. Gremel scored an insurance run on an error. That run proved to be critical when Holton's Cassidy Van Blargan scored on an error in the top of the seventh.

"I was really nervous, but I knew my team had confidence in me," Gremel said. "It happens all the time when I have pressure on me. I usually get it down. That's what the coaches expect."

And that's why coach Steve Bohn had Treiber bunt to give Gremel an opportunity with one out and a runner on second.

"If anybody's going to get a hit, it's Katie," Bohn said. "She's been swinging the bat really well the last two weeks. I thought we'd give her a chance, and she came through."

This is Unionville-Sebewaing's eighth straight trip to Battle Creek. Holton, playing six sophomores regularly, had never won a Regional until this year.

"As many times as you've been here, it's still this team's first time," Bohn said. "It might be Chelsey Bitzer's fourth time, but it's still this team's first time. Until you actually get to that game, there's still a lot of pressure on these girls. There are a lot of expectations for this team. They've been here, they're expected to be here and they're expected to win state titles. That all adds up to a lot of pressure on 16-, 17-, 18-year-old girls."

Perhaps the pressure of the semifinals led to an uncharacteristic five errors by the Patriots (37-3) and three walks by Treiber.

Bitzer gave Unionville-Sebewaing a 2-0 lead with run-scoring singles in the first and third innings. The Patriots outscored their first five postseason opponents 59-0, but finally surrendered two runs in the fourth inning as Holton benefited from a walk, a hit batter and an error.

Holton (27-10), which finished third in its league, lost the game by surrendering two runs in the sixth, but had a postseason run that will always be remembered in a town that showed up in large numbers to support the softball team.

"It was unbelievable," sophomore Jackie Stone said. "There are no words to describe how proud everybody is. The whole town, everybody came. It brings us all together, because this doesn't happen very much in a small town. It was great; I appreciate it."

While the Patriots are expected to make the championship game every year, Dundee has come out of nowhere to play on the final day of the season. 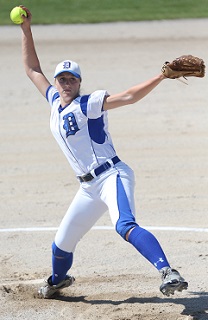 The Vikings (44-1) had never won a Regional before this season. However, they never played a game with Shaunna Musial or Kayle Phillips in their lineup until this season.

Musial and Phillips are freshmen who made key contributions in an 11-6 victory over perennial power Allen Park Cabrini in the other Semifinal.

With the game tied 4-4 and the bases loaded in the top of the sixth, Phillips singled home Brittani Rojem with the go-ahead run. A two-run single by Khali Burd made it 7-4. Hannah Rachor and Haleigh Kimble had run-scoring singles to make it 9-4.

After Cabrini (29-6) scored a run in the bottom of the sixth, Musial put the game away with a two-run homer in the seventh.

Dundee built a 4-0 lead with a four-run third before Cabrini came back to tie the game, the key blow being a three-run homer in the third by Sydney Lankford.

Dundee coach Mickey Moody pulled starting pitcher Vanessa Ewing after 3 2/3 innings, but said she would get the start against Unionville-Sebewaing.