So when her coach informed her a couple of hours before the showdown that he was going with 14-year-old freshman Haylee Brant instead, Baker thought he was kidding.

“I was pretty mad and couldn’t understand why he would do that,” said Baker, now a senior, thinking back to Holton’s 6-3 upset of Coleman, which was repeatedly frustrated by Brant’s off-speed pitches. “It worked out perfect. I’m really glad that we have both of us; it makes us a better team and that game proved it.”

Baker is now a senior and Brant a sophomore, and the duo has Holton hoping to get back to the Division 4 Semifinals for the third straight year – and then take the final two steps.

Holton, a rural school with 265 students in northeastern Muskegon County, was a volleyball powerhouse in the early 1990s, finishing Class C runner-up in 1993 and winning the title in 1994. The Red Devils also fielded outstanding football and baseball teams about a decade ago, including a memorable run to the 2006 Division 4 baseball championship game, where powerhouse Homer rallied for a 3-2 victory.

These days, Holton is making its biggest impact on the statewide sports scene on the softball diamond.

Holton made it to the Class C Semifinals in 2013, then posted a 37-0 record in 2015 with a senior-laden roster, before falling to powerhouse Unionville-Sebewaing in the Semifinals at Michigan State University. The Red Devils made a real statement about the strength of their program last spring, overcoming the loss of six key seniors and double-digit losses in the regular season to get back to the Semifinals before losing 2-0 to Indian River Inland Lakes. Holton finished 29-13 last year.

“Last year, we weren’t expected to be very good, and for a while we weren’t real good,” said third-year Holton coach Kirk Younts, himself a 1990 Holton graduate. “But we kept getting better and made another great run. It’s different now. We know we have a big bullseye on us, but we’re excited to get going.”

This spring, enthusiasm remains high with the return of all but three seniors off of last year’s final four team – including the “two Bs” on the mound, Baker and Brant.

Baker, the harder thrower of the two, finished last season with a 13-5 record and 2.93 ERA. She has worked tirelessly during the offseason with her pitching coach, Kelsey Bandstra, and comes into this season with five pitches and more pinpoint control.

Brant was 12-6 with a 2.36 ERA in her freshman year on the varsity and continues to improve both her speed and presence on the mound. Her signature win remains her complete-game gem over Coleman in last year’s Quarterfinals, and starting her in that crucial game drew coaching praise for Younts from his Coleman counterpart.

“It took a couple innings to get back down to her speed,” said Coleman coach Chad Klopf after getting ousted by Holton in the Quarterfinals for the second straight year. “We’ve seen some pretty good pitching the last few weeks. Good move.” 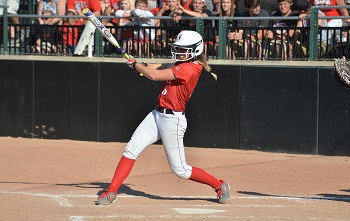 Younts will continue to use both pitchers this spring, but he believes his team’s biggest improvement will come at the plate.

“We have nine tough hitters this year, so we feel like we can be putting pressure on the other team all the time,” said Coach Younts, whose brother, Jeff, is Holton’s junior varsity coach. “I credit that to all the work these girls have done in the weight room.”

Among the other bats to watch in the Red Devils’ lineup are sophomore shortstop Kaylie Piper and seniors Courtney Slater, Micheylah Ross and Alicia Dykman.

The excitement surrounding Holton softball is evident all over town, starting with a successful golf outing in September and a breakfast fundraiser in March. Recently Holton, despite being one of the smallest schools in the Muskegon area, ran away with MLive’s first area “Team of the Week” poll with 5,381 votes – more than 61 percent of the total votes cast.

The team bonded further on a spring break trip to Gulf Shores, Ala., where, among other things, the Red Devils watched South Alabama’s college team play – an experience that made the Red Devils even more excited to get started.

Baker, who plans to attend Grand Valley State this fall, is determined to enjoy every minute of her final sports season at Holton, which she hopes will end one game later than the past two springs – in the Division 4 championship game on June 17.

She is one of many three-sport athletes (volleyball, basketball, softball) on Holton’s roster who have formed a special bond over the past four years of wins and losses and ups and downs.

“We have spent a lot of time together, and we are really close,” Baker said. “A lot of little girls in Holton really look up to us, which is pretty cool. We just want to finish strong.”