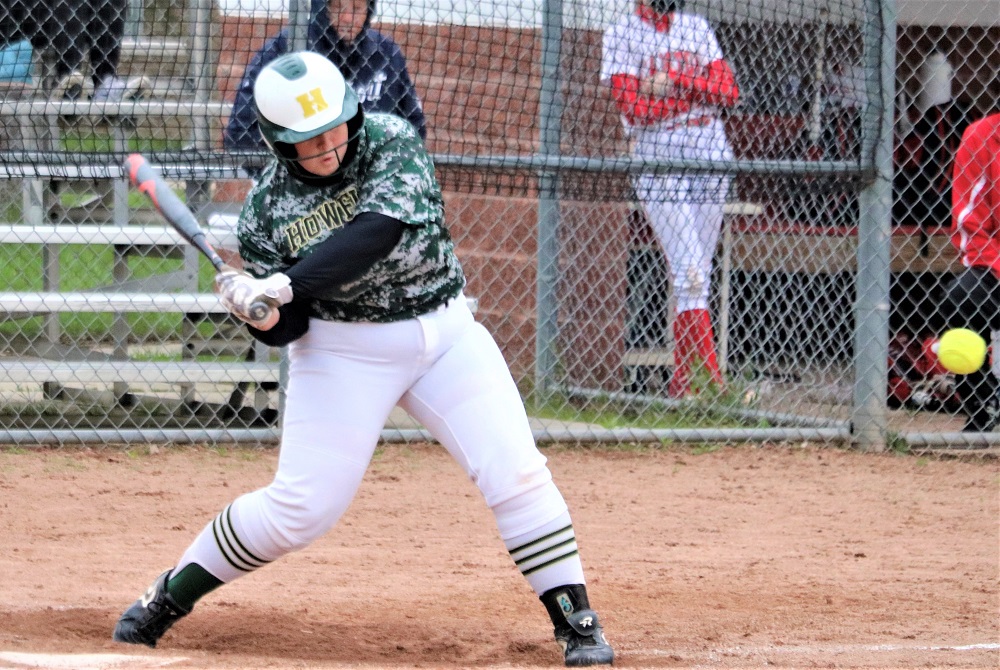 HOWELL — Avrey Wolverton is quietly having another outstanding season for the Howell softball team.

As a pitcher, she has 261 strikeouts in 114 innings, with two 20-strikeout games and another with 19 strikeouts. The latter was a perfect game, one of two no-hitters this season. She has a 19-1 record in 22 appearances.

At the plate, she’s hitting .435, with eight homers and 40 RBI for the Howell softball team through May 16. She plays first base when not in the circle.

With a month to go in the season, Wolverton, Howell coach Ron Pezzoni, and her teammates say she hasn’t gotten hot at the plate yet.

Wolverton is one of several key players on a Howell team looking to get back to the Division 1 Final this spring. The Highlanders (26-4-1) got there in 2019, but lost to Warren Regina 3-2 in eight innings.

Wolverton hit 17 home runs that season, earning her first-team all-state honors for the second year in a row. Pezzoni has no doubt she’ll get a third all-state nod this year, too.

“We’ve got one of the best hitters and pitchers in the state in the same person,” he said.

Wolverton’s most recent 20-strikeout game came on a cool and cloudy day at Canton in a 12-0 victory. Canton managed only one hit, in the top of the seventh inning, before Wolverton struck out the side to end the game.

Catcher Meghan Farren had an inkling something special was going to happen during warmups.

“You can tell if she’ll be on or off,” Farren said. “You can tell by the spin of the ball, and sometimes it comes in hotter than others.”

Wolverton was Howell’s second pitcher in 2019 behind Molly Carney, who now pitches at Notre Dame.

“I’m just pitching more and able to accomplish more,” Wolverton said of her success this spring.

“She moves the ball around really well inside and outside,” Farren said. “She works the ball well on both corners, and she knows how to bring it up and down.”

And Wolverton rarely misses her spots.

“She does miss sometimes,” Farren said, “and we laugh about it, and she says ‘My bad.’ It’s good.” 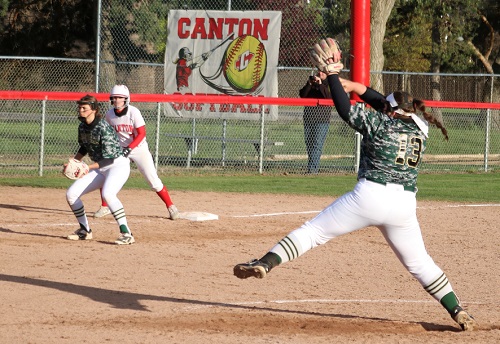 That pinpoint accuracy has kept hitters guessing this season. She’s held opposing hitters to a .145 average.

Wolverton accomplished what she did May 10 despite not getting a lot of sleep the night before.

That performance came after a late night coming home from Greenville, S.C., where she was visiting Furman University for the weekend. She got home around midnight and got up early to go to school, then pitched.

“I thought she might be a wreck, or tired,” Pezzoni said.

Wolverton plans to major in psychology at Furman.

“I’ve always been interested in what causes people to act the way they do,” she said.

In the meantime, she plans to write a successful final chapter to her high school career in a sport she’s been playing since age 8. She’s been pitching since she was 11.

“I saw everyone else doing it, and I thought it was cool so I wanted to try it,” Wolverton said.

She is mostly a quiet leader for the Highlanders.

“She doesn’t say a whole lot,” Pezzoni said. “Just takes care of her business, and that’s the kind of leader I like. You see some try to be (vocal) leaders, but to me it’s like, take care of your business (on the field) and people will follow you.”

All the way, the Highlanders hope, back to East Lansing.

PHOTOS: (Top) Howell’s Avrey Wolverton steps into a pitch this spring against Canton. (Middle) Wolverton makes her move toward the plate during her 20-strikeout performance. (Photos by Tim Robinson.)