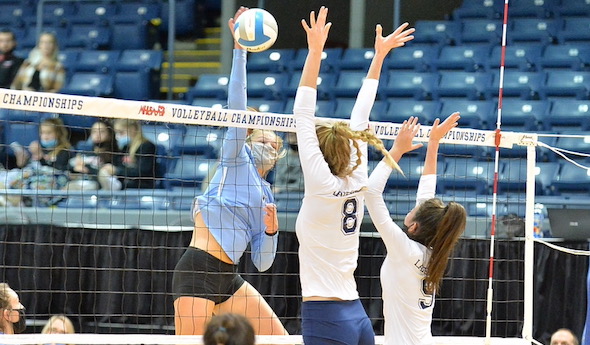 Lakewood earned that opportunity, but it was the Eagles who walked out of Kellogg Arena as champions.

“I think each year has had its own special meaning to me as a coach with these championships,” Gates said. “This year, with this group of seniors, has a very special place in my heart – they all do – but they’ve been here, most of them, from Day 1 as freshmen. Just to see their determination to social distance and not go to parties and make sure they could get to this day, you don’t see that very often from kids this age. It really moved me.

“Our message today in the locker room was love each other above all else, and if we do that, we’re going to be fine.”

It’s the third title in as many Finals trips for the Grand Rapids Christian program – and second straight against Lakewood – and after the match, the players were sporting shirts that had been made up for the occasion, which read, “Our tweets 3-peat.”

“I can’t even really put it into words right now, I don’t think,” Grand Rapids Christian senior Lauren Peal said. “It’s still kind of setting in that that just happened, if I’m being honest. It’s just an overwhelming feeling of the love from our teammates every single year, and the support that we have for each other. How we go into this game is 100 percent loving on each other and being there for each other the whole entire time. That whole entire game, we were playing for each other. I think that over any other feeling is what comes out of this, the overwhelming feeling of love you have during this game.” 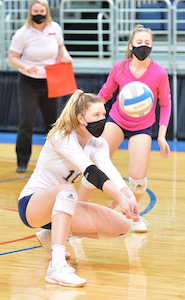 Much of the credit for that goes to setter Alyssa DeVries, who had 43 assists while spreading the ball around the court.

“I think she had the best match of her season tonight,” Gates said. “She had big shoes to fill, and she came in and she worked her butt off. We did extra practice with her every day of the regular season. She transformed into a completely different player from the first day until today. I am extremely proud of her.”

Addie VanderWeide led the Eagles’ attack with 19 kills, while Evie Doezema had 16. Peal added 17 digs, while VanderWeide had 11.

It was VanderWeide and Doezema that Rowland said he was expecting to have to deal with, and while they had strong matches, the rest of the Eagles’ attack was enough to get his team off rhythm.

“When we got the ball to the net to (Lakewood setter Skylar Bump), they served really, really well so we were scrambling a little more than we were used to,” Rowland said. “We’ve been the team that’s been in system all year, and they kind of took that away from us with their ability to do what they did from the service line.”