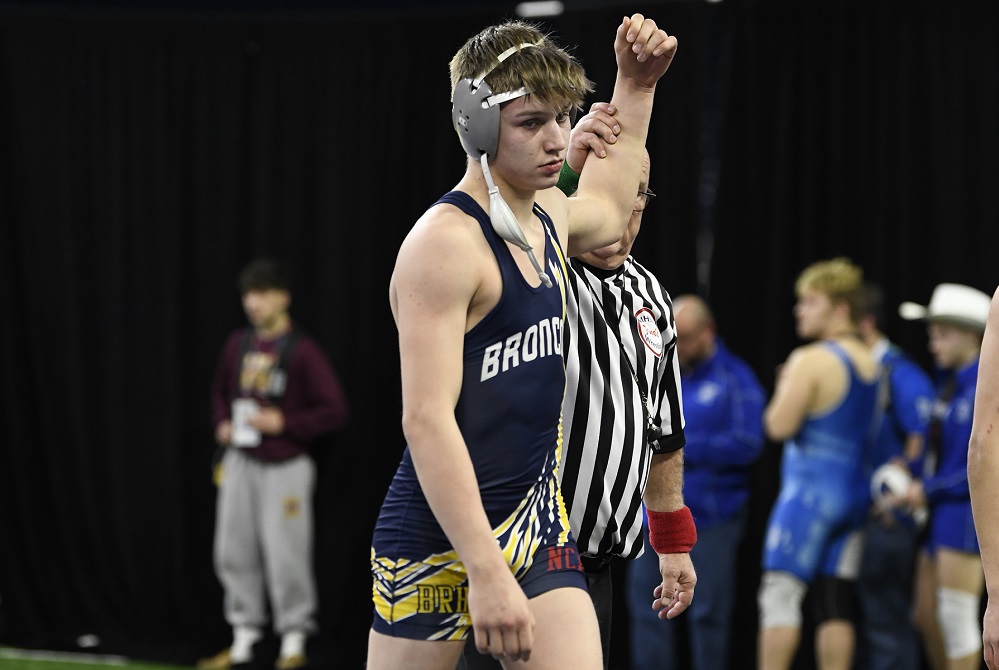 HARRIS — The Bark River-Harris wrestlers are gearing up for what they hope will be a historic postseason run.

BR-H will try to take the first step toward its goal when it travels to Manistique for the Division 4 Team District on Thursday.

Reigning District champ BR-H (21-2) faces the host Emeralds, and Iron Mountain meets Newberry at 6 p.m. The winners advance to the championship match at 7:30.

"This is definitely the best season we've had as a varsity program," said fourth-year coach Joe Racicot. "At the beginning of the season with the number of kids we had coming back, we thought we could be up near the top. Although, I wasn't sure we'd be 21-2. Many of the teams are shorthanded, although we're winning more matches than we're losing. We're heading in the right direction."

If the Broncos win the District, they would host the Team Regional for the first time March 24.

"It's going to be a challenge," said Racicot. "I have the utmost respect for the other coaches in our District. I've learned a lot from them. All of them are good friends and mentors to me. I'm one of the few coaches who didn't wrestle in high school because we didn't have a program here at that time. Although, it didn't take me long to fall in love with the sport."

Last year, the Broncos were crowned District champs for the first time in their 10-year history before falling to Onaway in a Regional opener.

Powers North Central sophomore Drew Allgeyer, who wrestles at BR-H through a co-op venture, is 23-0.

"We've been working hard," said Allgeyer, who will be wrestling at 160 pounds in the District and finished seventh at last season’s Finals at 145. "We have good practice partners and push each other every day. We're all helping each other to be the best we can be, which definitely pays off in competition.

"I have the strength for 171. I've been wrestling at 171 most of the year which helps me a lot,” he added. “All I want to do is have good matches. I always say I don't lose, I learn. There's always somebody better than you. That's big motivation right there."

Both of BR-H's losses this winter were to Division 2 Escanaba.

"We lost to them by six and 12 points," said Allgeyer. "They're the best team in the U.P., and they're well-coached. It's good for us to put up as much of a fight as we did, although none of this will mean anything once we get into the postseason when it really counts. Iron Mountain has a solid team. They and all the other teams will put their best lineup out there."

North Central junior Wyatt Raab (215) is 18-0 going into the postseason.

"This is the first time Bark River-Harris has had a chance to go to the state tournament as a team," he said. "We could also have the most individual qualifiers in school history. We're looking to make a lot of special trips this year.”

"We have a lot of young guys this year," he added. "I thought we'd be pretty good, but not this good. Esky was definitely our toughest competition, and I think Iron Mountain is closer to us. “This has definitely been a learning experience for me. The older guys have been teaching me a lot of things. I've learned to be more confident. They told me to 'know what you're doing and try to listen to your coaches and teammates during a match.'"

"It's nice to see that growing," said coach Racicot. "We hope to eventually get a girls tournament in the U.P."

PHOTO: Drew Allgeyer’s arm is raised in victory after one of his wins last season during the Individual Finals at Ford Field. (Click for more from High School Sports Scene.)