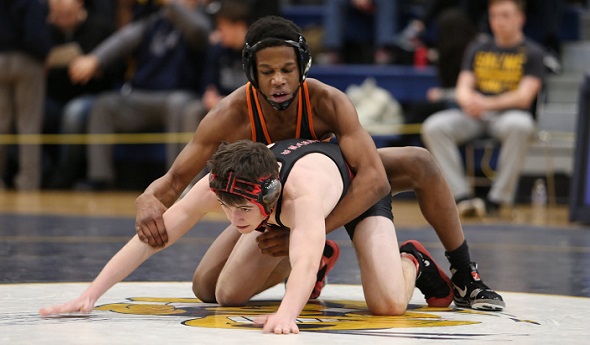 BELLEVILLE – Caleb Brown continues to be haunted by what he considers a grim disappointment in his Belleville wrestling career.

Last season, Brown lost during what those in the wrestling fraternity call the “blood round.” This is the consolation round, a match for fourth place, at the Individual Wrestling Regionals. Brown lost by one point in the 152-pound weight class to an opponent he had defeated earlier in the season and, thus, missed qualifying for the MHSAA Finals.

He was devastated but not consumed by it. For one, that was his junior season. Brown rededicated himself during the offseason. He continued to run cross country to keep his weight down and also increase his endurance.

This season Brown broke through barriers, claiming the Wayne County and Division 1 Regional championships at 152.

As proud as he is of reaching this point, it’s made even more special by the fact that he’ll enter The Palace of Auburn Hills on Thursday with his twin brother Chris. Chris Brown competes at 130. Last season he qualified for the MHSAA Finals at 119 and won a first-round match before losing his next.

“(Winning the regional) didn’t hit me right away. I was just talking about it with my teammates, and that’s when it hit me. I was really focused on winning the match.”

Caleb is 44-4 this season and will face Kyle Minor of Roseville in Thursday’s first round.

Chris is 47-2 and will go against Lee Grabowski of Brighton.

The Browns say having a twin who competes in the same sports is an advantage, if for no other reason than it enhances one’s competitive nature.

They both started wrestling in middle school by chance.

“We played football in the beginning,” Chris said. “The coach told us to wrestle to keep in shape. I was terrible in the beginning. But we’ve never been known as quitters. I like the individualism. You can’t use the excuse your team lost it for you.”

Once they entered high school, the Browns gravitated even more toward the sport. But it wasn’t until their sophomore season that they became proficient at it.

For Chris, there was one match that showed he could compete against the best.

“My sophomore year was my first on varsity,” he said. “I went against a ranked opponent, and I won by a point. That was huge for my confidence.”

Coinciding with the Browns’ rise was the return of Derek Phillips as coach. Phillips started coaching in 1994 and stayed 11 seasons before taking time off to help raise two children. He remained within the school district as a teacher, but the time commitment of teaching and coaching together was not conducive to spending quality time with his sons.

In 2013, Phillips returned. He has been a mentor for the Browns and a third senior MHSAA Finals qualifier, David Tooley (215).

Phillips was the one who encouraged the Browns to compete in cross country.

“It goes hand in hand,” Phillips said of the two sports. “I love it. They come into the wrestling season in shape. All three have over 100 wins and all three are good students. They’re a coach’s dream.”

Tooley is a little different. It’s not because he plays football instead of competing in cross country. And it’s not because he’s a three-sport athlete (also plays baseball). It’s his warm-up routine that causes many to take a second look, scratch their heads or both.

It’s more than a routine. It’s a dance. Sort of. He got the idea from watching a wrestler from Southgate Anderson who competed against his brother, Mark Tooley, when the elder Tooley wrestled for Belleville in 2011.

“It’s like no other,” David Tooley said. “It’s an active movement. It’s like a dance, and it’s a little embarrassing.” 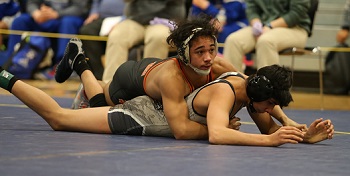 The Browns’ warmup routines are a little less flamboyant, but they do get a kick out of watching their teammate go through his routine. Chris likes to listen to music just before his matches. Caleb prefers listening to his coach, receiving last-minute instructions.

Away from the mat, the Browns are constantly challenging each other. Take running, for example.

“We try to one-up each other,” Chris said. “We’ve always been competitive. I’m faster than he is, when we run cross country. We’re not too far apart though.”

Caleb judges a person’s speed all together differently.