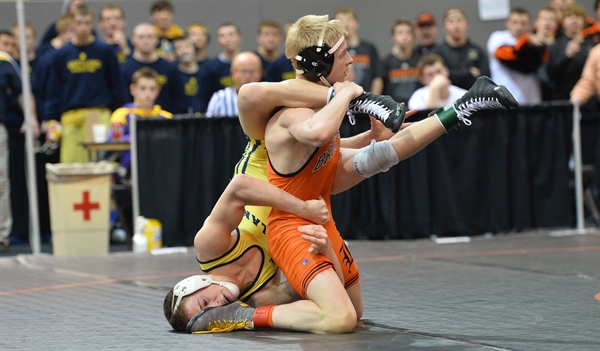 BATTLE CREEK — Lee Grabowski must have felt the weight of the world on his shoulders Saturday night.

With his team leading 28-25 heading into the final match at 112, the Brighton sophomore posted a 4-2 victory over a rival who had defeated him twice this season.

Not only was the victory significant for Grabowski, but it resulted in the final points in Brighton’s 31-25 victory over Hartland in the MHSAA Division 1 Final at Kellogg Arena.

The team title was the first for Brighton, which was making its first-ever appearance in the championship match.

“We kind of thought with a few matches to go that it could come down to Grabowski’s match,” admitted Tony Greathouse, Brighton’s second-year coach. “We knew that he could do it. What a way for a sophomore to go in there and beat a kid who had beaten him earlier this season. With that pressure, he stepped up and (delivered). We did not want it to go down to (criteria) points.”

Grabowski lost to Hartland’s 112-pounder by one and three points, respectively, this season in Kensington Lakes Activities Association North competition.

Brighton (29-1) lost a point three matches earlier for unsportsmanlike conduct. If the meet would have ended in a 28-28 draw, Hartland would have won on the criteria.

Grabowski and the Bulldogs didn’t leave that for chance.

Brighton, ranked No. 1 in the state the whole season, had taken down Hartland in their previous meetings this season, defeating the third-ranked Eagles (31-4) by a 38-18 count in mid-January. The Bulldogs also defeated Hartland at the KLAA Championships.

Brighton walked into Kellogg Arena with 10 senior starters, but the platform for a title run had long since been put into place. The Bulldogs also had plenty of motivation, losing to Hartland in last year’s District Final.

“I think looking back on that day, we had plenty of motivation for this season — no doubt,” noted Greathouse. “With all of the seniors we have on this team, they talked about coming back this season and contending for a state championship. They stepped up this season and accomplished that goal.

“But it just didn’t happen overnight,” continued Greathouse. “I have only been here for two years. I like to think that I have helped. But Sam Amine was here for 10 seasons before and he really laid the foundation for all of this, getting Brighton to become such a strong program. We have only added to it. The kids on this team put in all of the hard work to make this possible.”

Brighton opened this season with a convincing victory over three-time reigning Division 1 champion Detroit Catholic Central, and the Bulldogs took over the top spot in the rankings right after that signature win.

On the other side, Hartland, one of Michigan’s most successful wrestling programs over the past quarter century, claimed its fifth runner-up trophy. The Eagles made their 14th straight trip to the Quarterfinals and 16th total in 23 seasons.

“It does hurt now,” sighed Hartland coach Todd Cheney, who took over the program in 1993. “I know we have a lot coming back next season with only two senior starters. But we came close again. We lost a couple of matches that we could have won and won a couple of other swing matches. But you have to win more matches at the state finals and Brighton won eight of them.”

Brighton led 12-0 after three matches, only to see Hartland go on a 22-0 run for a 22-12 advantage through eight weight classes.

A technical fall win from Beau Mourer (171) and a void victory from Nick Brish (189) put Brighton back up 23-22 with four matches to go — and the Bulldogs never relinquished the lead.