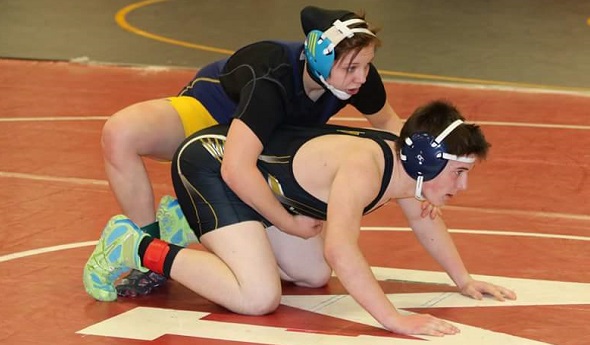 HARRIS — It hasn’t always been easy, but Bark River-Harris senior Morgan VanLanen has held her own for four years in the male-dominated sport of wrestling.

This year, she is entered in the 152-pound division after competing at 140 a year ago.

"I hadn’t been able to drop weight and had to move up,” she said. “It really hasn’t seemed like that big of an adjustment. I was in a pretty packed bracket last year, which prepared me for this year.”

VanLanen is 7-17 heading into Saturday’s Manistique Super Duals after finishing 1-2 in the Upper Peninsula Championships at Marquette last Saturday.

A total of 88 girls wrestled on teams at MHSAA member schools during the 2014-15 school year, representing 66 schools. Participation numbers for this season will be announced at the end of the school year.

VanLanen tuned up for the U.P. tournament by pinning Menominee’s Seth Smith in two minutes, 27 seconds in the Broncos’ lone home meet on Jan. 19.

“That was a pretty big boost,” she said. “I wrestle a lot of stronger guys. I had been weight lifting every day, trying to prepare myself for that. I’ve had a few quick pins, but win or lose you always learn something. I like sports that are more individual because you have to take all the responsibility for how you perform. You’re not just sitting the bench.”

VanLanen said practices are challenging, but have also been productive.

“We run a lot, but that doesn’t always condition you for wrestling,” she added. “I haven’t been focusing so much on my technique. I’ve been wrestling since second grade and have the technique down for the most part. We focus more on team wrestling during practice, which is good for conditioning and gets us prepared more for the matches.” 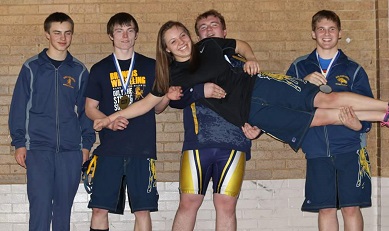 Outside of high school wrestling, VanLanen has competed in out-of-state girls tournaments during the offseason. This winter, VanLanen is on a Bark River-Harris high school team of just five.

“It’s going to be tough to compete in the (Division 4) Team District with only five on the team,” she said. “There’s also a lot of good teams out there. The Individual District (at Munising) will be similar to the Escanaba Elks tournament. There just won’t be as many numbers.

“I think our team has been pretty successful this year. Some of the kids have done real well. I’m probably going to be pretty sad when the season ends, knowing I’m done with everything.”

“I want to go into athletic training,” she said. “I’ve thought about wrestling in college, but I don’t want to be in college more years than I have to.”