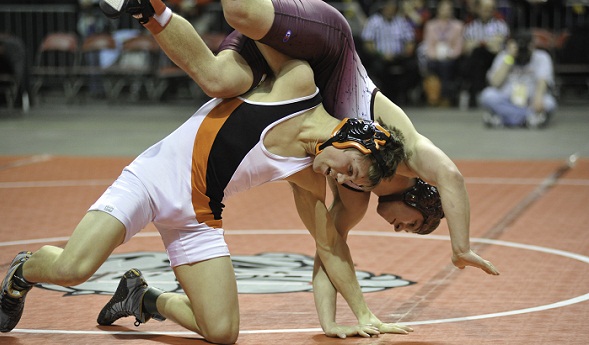 AUBURN HILLS — Their toughest competition lives under the same roof.

Kanen and Zehlin Storr of Leslie get more of a battle sparring against each other than they typically get in a match against other high school wrestlers.

They combined to achieve a rarity on Saturday as brothers who completed perfect seasons with state championships in the MHSAA Division 3 individual Finals at The Palace.

Kanen finished off an undefeated freshman year at 58-0 by beating Reiley Brown of Whitehall 9-6 in the 103-pound final. Five weight classes later, Zehlin capped his junior year with a 59-0 record by beating Chris Briar of Menominee 7-3 in the 135-pound title match.

"Me and my brother work our butts off," Zehlin said. "We train together and we go all over the state looking for partners. I feel we deserve this."

Zehlin has been on the cusp of winning a championship each of his first two seasons, taking third in Division 4 at 130 pounds as a freshman before losing 5-4 in the Division 3 135-pound final last year. He has a 158-12 record.

He was able to impart some of his experience on the big stage to his younger brother.

"I told him not to let The Palace get to you," Zehlin said. "It's a nerve-racking place. I told him to stay calm, like he always does."

Kanen gives up weight to his older brother, but the brothers say they still get quite a bit of benefit from their sessions against one another.

"He really helped me a lot," Kanen said. "When we don't have other practices to go to, we drill with each other and help make each other better. Yeah, he's a little bigger. I make him work, but he beats me up pretty good."

The Storrs weren't the only brothers to win Division 3 titles, as senior twins Steven and Joe Sika of Whitehall took home championships.

Click for full results, and read below for recaps of each championship match and comments from all the winners.

Marogen came a long way from his first wrestling match in middle school to the final one of his high school career.

"I just remember my first match ever," he said. "I came out and got pinned. Now I'm here today, winning this. My freshman year, I had a losing record, but these coaches just kept on me."

The match was tied 1-1 in the third period before Marogen scored the final three points to win the first of Dundee's three championships on Saturday.

One match after Kanen Storr completed a perfect freshman season, Schroder did the same by scoring a major decision over Martinez.

Schroder has been preparing himself for this day for years. He can recall being at the MHSAA Finals 10 years earlier when Davison's Brent Metcalf won the second of his four straight titles.

"I kind of expected it," Schroder said. "I've worked in the room. I've wrestled a lot of these kids when I was younger. I didn't want to accept anything but the state championship. Every single time I stepped into practice and put my shoes on, that's what I was thinking of."

Santos had a grip on Fenner's right leg before the Birch Run sophomore was able to pry himself loose for an escape that ended the match.

"Right when I reached back, I grabbed his fingers, felt them get loose," Fenner said. "I kept pulling up. Finally his hands slipped off and disconnected. I pushed back and slipped away."

It was a much more satisfying end to the season for Fenner, who held a five-point lead late in the third period of a quarterfinal match last year before losing 7-6 to Jackson Lambdin of Allendale.

Cooper added a third MHSAA title to the 103- and 112-pound crowns he won the last two years at Remus Chippewa Hills.

He transferred his senior year to Whitehall, where his father, Tim, was the undefeated 1980 Class C 132-pound champion.

"My dream was to match my dad and be a one-timer," Cooper said. "I've always wanted to follow in his footsteps. Winning two was, oh my gosh, amazing. Now three — I couldn't be any happier."

"Wrestling is the biggest part of my life," Limmex said. "This was my main goal and I accomplished it. It's great."

Limmex outscored his four opponents at The Palace, 43-6.

Doug Rojem has been on the podium twice before, but this time he made it as the champion.

He took third last year at 130 pounds after losing 6-4 in overtime in the semifinals to eventual-champion Alberto Lopez of Otsego. He was fifth at 119 in 2011.

"That was a heartbreaker," Rojem said of the overtime loss. "This year,  it was completely different. I didn't feel much pressure. I just let myself wrestle and good things happened."

Skatzka is halfway to four MHSAA championships after scoring a major decision over Bennett.

Skatzka was the 135-pound champion as a freshman last year.

"I do look forward to it, but I like to take everything one at a time," Skatzka said. "I don't like to look ahead. All I wanted to do was come out strong. I wanted an early takedown to get in his head."

It wasn't an easy path to the championship for Pahl, who won 3-2 in the quarterfinals and 4-3 in the semifinals.

"It was just a lot of mental toughness and being able to be on top of your game all the time," Pahl said.

Pahl was seventh at 140 pounds last year. He attributed his improvement to a grueling week-long wrestling camp at Penn State last summer.

After squeaking out a 7-6 victory in the semifinals, Sika rolled to his first MHSAA championship via technical fall.

He placed seventh at 152 pounds last year when he expected a much better fate.

"Taking seventh last year wasn't a good feeling," Sika said. "I had it with me all summer, all year. It really motivated me. This was my last chance. Things change when you get here. You see a lot of good wrestlers lose. It happened to me last year. I didn't want to end my high school career on a bad tournament."

While Steven Sika was winning the 160-pound title, Joe Sika didn't allow himself to watch. Instead, he stayed under the stands in the warm-up area.

"I'm not allowed to watch his matches, because if he loses, I do," Joe said. "If I don't know, then I'll do my own thing. That's how my losses have come this year."

Joe said that he found out from a child that Steven was on the verge of winning by technical fall.

"We're practice partners," Joe said. "It helps us a lot. We're pretty much the same talent. It's like wrestling yourself, basically."

Warren wanted to make progress after losing in the first round at 171 last year to Joe Sika.

"I was just hoping to place at this tournament, but to come out on top is really extraordinary," Warren said.

Warren scored a near-fall with 12 seconds left to take the lead for good.

Hutchison repeated as the 215-pound champion in his third trip to the final round. He was the runner-up at 171 pounds in 2011.

"Man, it gets better and better every time," Hutchison said. "I get less nervous and more excited. I'm always confident — confident, but not cocky. There's always a target on your back."