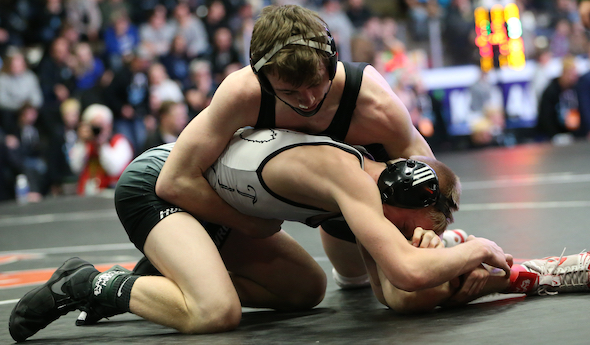 KALAMAZOO – Last year when Clinton wrestling co-coach Jeff Rolland walked off the mat after the Division 4 Team Final, he said, “Until someone beats them, they are the one everyone in chasing.”

“They” are the Hudson Tigers, who had just beaten Rolland's up-and-coming Clinton team to win their third-straight Division 4 title.

So Rolland and his Redskins went back to work during the offseason, recalling how they felt wrestling for a championship only to come up short against a program that is comfortable on that stage.

Spin it forward one year, and Clinton found itself back on the big stage against the Tigers, and that hard work and self-confidence paid off. This time, Clinton beat Hudson 36-27 on Saturday at Wings Event Center, clinching the first team wrestling championship in Redskins history.

"This took us believing in each other as a family," Rolland said. "We believe this program is a family, (kindergarten through 12th grade), to the parents and the community, and this took us digging down and focusing on who we are – focusing on us."

That focus was tested even before this weekend began, as top-ranked Clinton entered Friday’s Quarterfinals as the third seed in Division 4.

The Redskins then had to go through a very tough New Lothrop team in the Semifinals to get to Hudson. 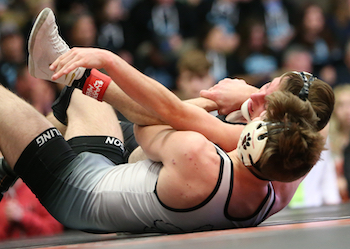 But it wasn't all good for the Redskins, especially early.

Starting at the 119-pound weight class, Hudson jumped out to an 18-0 lead through the first four matches, thanks to a pair of pins from Caden Natale at 130 and CJ Berro at 135 and a pair of decisions from Tyler Bolenbaugh and Jackson Miller at 119 and 125, respectively.

But then came the strength of Clinton's lineup, and the Redskins went on to win eight of the next nine weight classes to earn their first team title.

During that stretch, the Redskins got technical fall victories from AJ Baxter, Kent McCombs and Brayden Randolph and a pair of pins from Logan Badge and Jack Voll.

Badge said his team was not too worked up by being down so much early.

"We were still confident in ourselves," said Badge, a returning Individual Finals champion.  "We knew our capabilities, knowing we were able to score and get bonus points when we needed."

Hudson coach Scott Marry was proud of his team, even though it fell short of the goal it sets for itself every season.

"They are very tough," Marry said of Clinton. "I thought everything went well. We wrestled a very good dual. We had our opportunities, and that is all you can ask for. You have to give them credit. I'm not going to say anything bad that we did. I'm just going to say they did better."

PHOTOS: (Top) A Clinton wrestler works for control on top while his Hudson opponent goes for a foot during Saturday’s Division 4 Final. (Middle) Clinton and Hudson wrestlers work to gain control. (Click for more from HighSchoolSportsScene.com.)