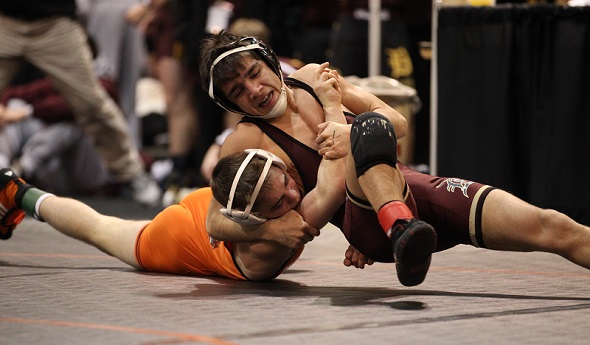 When 135-pound matches are wrestled at The Palace of Auburn Hills this weekend, many eyes will be watching Davison’s Lincoln Olson.

Olson – along with Richmond’s Devin Skatzka in Division 3 – will compete for his fourth MHSAA championship, hoping to join only 19 other Michigan wrestlers who have ended all four years of high school with a title.

See below for 10 contenders to watch this weekend at the Division 1 Individual Finals, plus others who enter the tournament undefeated or coming off runner-up finishes in 2014. Follow all the matches beginning with Thursday's first round on a subscription basis live on MHSAA.TV, and click here for results at MHSAA.com.

Those listed below are only a handful of numerous contenders for this weekend’s 14 Division 1 championships – in this division alone, seven athletes not listed below have lost only once this season. Come back to Second Half at the end of this weekend, when we’ll have post-match thoughts from all 14 title winners.

112: Max Johnson, Davison junior (42-7) – Last season’s champion at this weight may not have as sparkling a record as some contenders, but he entered last season’s Finals with an identical W-L on his way to winning the title.

112: Carl Antrassian, Monroe junior (54-2) – He’s a favorite at his new weight after falling to Ben Freeman (see below) in last season’s championship match at 103 and after leading his team to the MHSAA Quarterfinals last weekend.

125: Camden Bertucci, Grand Haven senior (40-0) – After just missing the Finals last season, Bertucci can add a title to his runner-up finish at 103 as a freshman and third place at 112 as a sophomore.

125: Ben Freeman, Walled Lake Central sophomore (40-0) – Last season’s champion at 103 has only one loss during his high school career and won all of his 2014 Finals matches by technical falls.

130: Trevor Zdebski, Detroit Catholic Central senior (42-5) – His high school career so far has included a championship last season at 119 pounds, a third place at 103 as a freshman and two team titles.

135: Lincoln Olson, Davison senior (48-0) – As noted above, Olson is poised to enter an elite group; in addition, he carries a 185-3 record into his final weekend before moving on to Oklahoma State University.

145: Logan Parks, Southgate Anderson senior (53-0) – After finishing third in what arguably was the toughest bracket at last season’s Finals – 140 – Parks can cap this season with a title and the last two with a combined 111-2 record.

152: Jacob Gorial, Hartland senior (54-0) – Recall the 2013 Finals, when Gorial had the difficulty of facing and falling to teammate Austin Eicher in the 130-pound championship match; he can add a first title to a seventh place as a freshman, the second as a sophomore and a fourth place last winter.

160: Myles Amine, Detroit Catholic Central senior (43-0) – Another of the latest Shamrocks stars can graduate as a back-to-back champion after winning at 140 pounds last season and finishing third at 130 as a sophomore.

285: Brian Darios, East Lansing senior (5-2) – Yes, that record is correct; Darios has battled through multiple injuries this season, but remains a favorite to finish on top after falling in an ultimate tie-breaker in last season’s championship match.