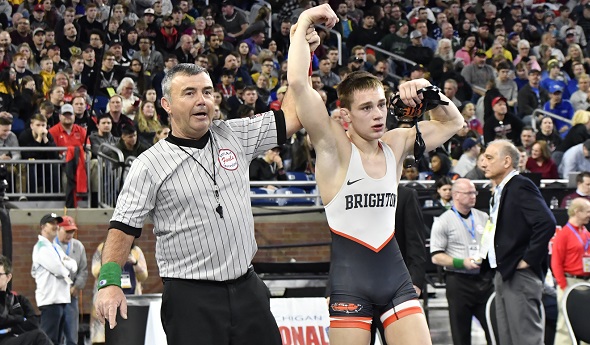 But the best part over the next two days will be watching how 210 more wrestlers seeking similar stardom work to break in against such an experienced group of elite performers.

Below, we look at 10 contenders to watch in Division 1, plus list all of the top seeds heading into this weekend. We no doubt missed a few who will end up among the biggest headliners Saturday – but come back to Second Half early Sunday as we’ll interview and report on all 56 champions.

The “Grand March” on Friday begins at 11 a.m., with five rounds wrestled throughout the day including the semifinals at 7:30 p.m. Wrestling picks back up with consolation rounds at 9 a.m. Saturday, and concludes with the championship matches that afternoon at 3:30 p.m.

119 Brandon Ferretti, Macomb Dakota junior (30-1) – The reigning champion at 112 is the top seed this time at 119 and enters with a combined 83-1 record over the last two seasons. His only loss was to Division 2 top seed Joe Haynes of Warren Woods Tower, by sudden victory in Ferretti’s third match of this season. Ferretti also finished third at 103 as a freshman.

119 Kavan Troy, Rochester junior (44-5) – Last season’s champ at 103 moved up two weights and took a few losses, but is in position to make a big statement early with a possible chance of facing top seed Ferretti in the second round. Troy finished 50-0 a year ago, bringing his combined record the last two seasons to 94-5.

135 Eddie Homrock, Brighton senior (40-3) – Homrock moved up from fourth at 125 as a sophomore to champion a year ago, and will enter his last high school Finals as the top seed in his bracket. His only in-state defeat this season came in December to Lowell’s Austin Boone, who is going for a fourth title in Division 2. Homrock will continue at Michigan State.

140 Josh Edmond, Detroit Catholic Central senior (39-0) – A three-time finalist, Edmond will attempt to win a third championship to go with last year’s title at 135, another at 135 in 2018, the 130 title in 2017 and a Division 2 runner-up finish at 135 as a freshman. The top seed in his bracket, he’s a combined 156-3 over four seasons and wrestling for his second undefeated campaign. He will continue at Missouri.

145 T.J. Daugherty, Waterford Kettering senior (31-0) – Daugherty fell just short of claiming a second championship last season, falling 3-0 to undefeated Kyle Kantola of Hartland in the 130 title match. That was Daugherty’s only loss of 2018-19, and he hasn’t been defeated since. He won the title at 103 as a freshman.

160 Derek Gilcher, Detroit Catholic Central senior (41-2) – Gilcher is wrestling for a third title after winning 140 last season, 135 as a sophomore and finishing fourth at 119 as a freshman. Two wins this weekend will give him 150 for his career, and he enters as the top seed. His only in-state loss this winter was to Davison’s Alex Facundo, the top seed at 171.

171 Alex Facundo, Davison junior (35-2) – Facundo is the top seed at this weight and on a possible four-title track, with championships at 160 last year and 152 as a freshman. He has 18 wins by pin and 11 by technical fall this season and already has committed to continue his career at Penn State after graduation.

215 Brendin Yatooma, Detroit Catholic Central senior (41-1) – The reigning champion at 215 will go for another title and third Finals placing after also taking eighth at 189 as a sophomore. He’s undefeated against in-state competition this winter and a combined 80-4 overall over the last two, and enters as the top seed.

285 Steven Kolcheff, Detroit Catholic Central senior (42-2) – Kolcheff also is attempting to finish his high school career with a repeat and finished runner-up at this weight as well as a sophomore. He’s not the top seed, with his only in-state loss this season to top-seeded Jake Swirple of Livonia Franklin in sudden victory after beating Swirple by decision three weeks earlier.

285 Jake Swirple, Livonia Franklin senior (55-1) – As noted above, Swirple is the top seed at this weight, coming back from a 3-2 loss to Kolcheff on Feb. 1 to defeat him at their Regional 3-2. Swirple was third at this weight last winter and eighth as a sophomore, and he’s 161-14 combined over the last three seasons.

PHOTO: Brighton’s Eddie Homrock has his arm raised in victory by the official after his Finals win last season at Ford Field. (Click for more from HighSchoolSportsScene.com.)