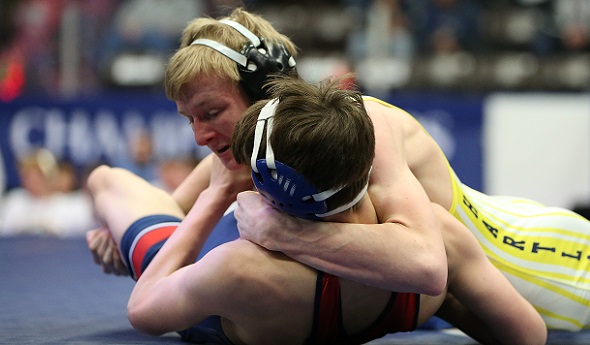 Six returning champions and 10 wrestlers who finished runners-up at the MHSAA Individual Finals in 2018 get this weekend’s Division 1 brackets at Ford Field off to an incredible start.

But they represent just one layer of elite contenders attempting to make history.

Below, we look at 10 contenders to watch in Division 1, plus list everyone who finished at least as a runner-up in 2018 and all of the top seeds heading into this weekend. Surely we still missed a few who will end up rising to the top of the podium Saturday – but come back to Second Half early Sunday as we’ll interview and report on all 56 champions.

The “Grand March” on Friday begins at 11 a.m., with five rounds wrestled throughout the day including the semifinals at 7:30 p.m. Wrestling picks back up with consolation rounds at 9 a.m. Saturday, and concludes with the championship matches that afternoon at 3 p.m.

125 Eddie Homrock, Brighton junior (52-2) – The top seed at 125 has lost only to two out-of-state opponents and dealt Chambal one of his defeats this past weekend. Homrock was fourth at this weight last season.

130 Kyle Kantola, Hartland senior (46-0) – After finishing runner-up at 125 a year ago, Kantola is the top seed at 130 and looking for his first title after also finishing seventh at 119 as a sophomore and fifth at 103 as a freshman.

135: Joshua Edmond, Detroit Catholic Central junior (36-2) – Last season’s champion at 130 and the 2017 Division 2 runner-up at 135 (for Orchard Lake St. Mary’s) is the top seed in Division 1 at 135. His two defeats came to out-of-state opponents, and he’s unbeaten in 2019 and undefeated against Michigan opponents the last two seasons.

140 Derek Gilcher, Detroit Catholic Central junior (31-2) – The top seed at 140 won the championship last season at 135 and finished fourth at 119 as a freshman. He too is undefeated against in-state opponents this season.

152 Cameron Amine, Detroit Catholic Central senior (36-0) – Amine is the top seed at this weight after finishing runner-up a year ago, falling 4-2 to Davison’s Alex Facundo (see below) in the final. Amine won 125 as a freshman and 145 as a sophomore, and beat Facundo 2-1 in an ultimate tie-breaker at the beginning of January.

160 Alex Facundo, Davison sophomore (35-2) – After winning 152 last season, Facundo is the top seed at 160 and someone forecast to possibly join the four-championship club in 2021. His only defeats this winter – and for his high school career – were to Amine as noted above and by injury default at his league tournament.

189 Cal Stefanko, Davison senior (30-2) – Last season’s runner-up at 171 also took fifth at 160 as a sophomore. He enters this weekend as the top seed at 189 with a win over Turner (below) and losses only to out-of-state opponents.

189 Eaton Turner, Detroit Catholic Central senior (37-3) – Turner won 215 last season but lost to Davison’s Stefanko (above) during a December dual that likely cost him the top seed. Turner’s only other losses came to out-of-state opponents, and he could see Stefanko in the championship match this weekend.

PHOTO: Hartland’s Kyle Kantola works toward a pin during his team’s Division 1 Quarterfinal match against Westland John Glenn on Friday at Wings Event Center. (Click for more from HighSchoolSportsScene.com.)