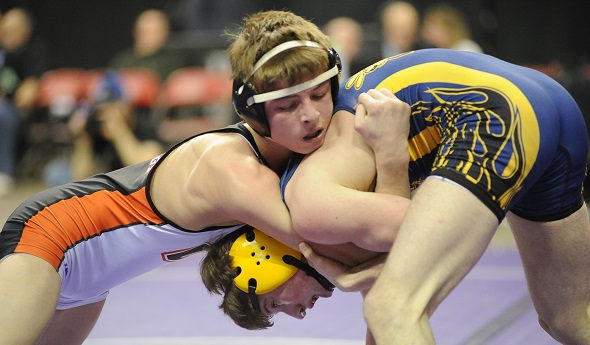 Eight wrestlers who have won a combined 12 MHSAA individual championships will take the mat during this weekend’s Individual Finals at The Palace of Auburn Hills.

Among the many finishing high school careers are two hoping to do so with third high school titles – Clio’s Mason Smith and St. Johns’ Logan Massa.

See below for 10 contenders to watch this weekend, plus others who enter the tournament undefeated or coming off runner-up finishes in 2014. Follow all the matches beginning with Thursday's first round on a subscription basis live on MHSAA.TV, and click here for results at MHSAA.com.

Those listed below are only a handful of the numerous contenders for this weekend’s Division 2 championships. Come back to Second Half at the end of this weekend, when we’ll have post-match thoughts from all 14 title winners.

112: Dominic LaJoie, Gaylord sophomore (33-2) – LaJoie is 83-2 over his first two seasons after winning the championship at 103 last season, and he helped his team to the MHSAA Semifinals last weekend in Battle Creek.

140: Austin Thompson, Marysville senior (46-1) – This weight class is loaded and Thompson might be the favorite after winning 130 last season; his only loss this winter came to GRCC two-time champ Nate Limmex.

140: Austin Melton, DeWitt junior (38-4) – He’s another reigning champion wrestling this weekend at 140, having claimed the title at 135 last season after also making the MHSAA Finals at that weight as a freshman.

140: Noah Hanau, Stevensville Lakeshore senior (49-0, 140) – The lone undefeated wrestler at 140 has qualified for four MHSAA Finals and placed fourth at 130 pounds as a sophomore before finishing just outside the top eight last season at 135.

152: Connor Myers, St. Joseph senior (26-0) – The Bears’ standout has been building toward this final run with third-place finishes at this weight both of the last two seasons.

160: Logan Ritchie, New Boston Huron senior (54-1) – This is Ritchie’s third season at this weight; he finished fourth as a sophomore before winning the title last year, and also finished sixth at 145 as a freshman.

171: Logan Massa, St. Johns senior (33-0) – Only an overtime Finals loss to Ada Forest Hills Eastern standout Tim Lambert in 2012 is keeping Massa from wrestling for a fourth title this weekend – he won at 135 as a sophomore and 152 as a junior and hasn’t lost since his first season.

215: Josh Colegrove, Lowell senior (36-0) – The reigning champion at this weight has only one loss over the last two seasons and also finished third at this weight as a freshman.