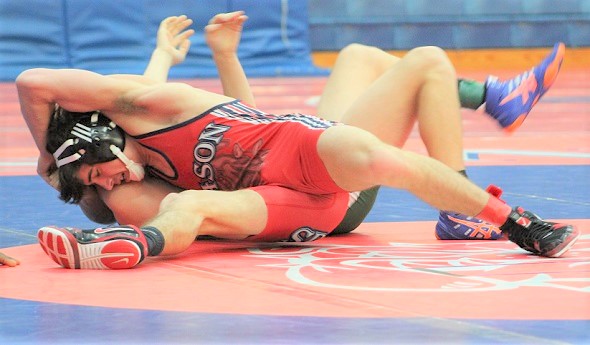 Significant change will spark this season’s Division 2 Wrestling Quarterfinals at Wings Event Center, as five teams will be competing in Friday’s round that did not a year ago – including two programs wrestling for the first time at this level of the tournament.

Yet amid the buzz, a constant in Michigan high school wrestling will be standing tall.

Lowell is back and the top seed in Division 2 after winning its record sixth-straight MHSAA Finals championship in Kalamazoo a year ago. In fact, the Red Arrows are the only team among the top five seeds in this division that has won a Finals title.

But extending the streak won’t come easily – especially considering the second and third-seeded teams are led by two of the most successful and longest-serving coaches in MHSAA wrestling history.

The Division 2 Quarterfinals will be wrestled at 6:45 p.m. Friday. Top seed Lowell will wrestle Croswell-Lexington, No. 2 Gaylord will take on New Boston Huron, No. 3 Stevensville Lakeshore will face Mason and No. 4 Warren Woods-Tower will match up with Muskegon Reeths-Puffer. Semifinals are noon Saturday, with the championship match that afternoon at 3:45 p.m. All matches this weekend will be viewable live on a subscription basis on MHSAA.tv. For Friday’s schedule and results throughout, check the MHSAA Wrestling page.

Below is a look at all eight teams competing in Division 2, listed by seed.

Record/rank: 25-1, No. 7
League finish: First in O-K Black
Coach: Matt Brink, 14th season (269-117)
Championship history: Has not appeared in an MHSAA Final.
Individual Finals qualifiers: 119 Jacob Blawat (40-7) jr., 152 James Rozycki (42-4) jr., 189 Colby Stephenson (45-2) sr., 215 Hunter McCall (41-1) sr.
Outlook: Brink, a three-time individual champion at Fruitport, has led Reeths-Puffer to its first Regional championship to go with six straight District and league titles. The Rockets opened the postseason with a four-point District win over No. 8 Whitehall and also got past Allendale by nine in the Regional Final to earn this first-time opportunity. McCall brings experience on the big stage; he finished third at 215 last season. Nine starters total have at least 30 wins – junior Thade Radosa (145/42-3) just missed qualifying for the Individual Finals but is another top contributor.

Record/rank: 23-2, unranked
League finish: First in Capital Area Activities Conference Red
Coach: Brian Martel, 17th season (486-110)
Championship history: Three MHSAA titles (most recent 2006), one runner-up finish.
Individual Finals qualifiers: 103 Tayden Miller (39-5) fr., 130 Tanner Miller (41-1) sr., 285 Jack Gilchrist (40-2) sr.
Outlook: A three-time Division 2 champion during the first decade of the 2000s, Mason is back at the Quarterfinals for the first time since 2013. The Bulldogs have won 11 straight District titles but frequently have run into state-ranked competition at the Regional level – and this time they advanced with a 33-27 upset of No. 4 Eaton Rapids in the Regional Final. Tanner Miller finished fifth at 130 last season and is one of seven senior starters finishing their careers memorably.

PHOTO: A Mason wrestler works toward a pin during Individual District competition Feb. 15. (Click for more from HighSchoolSportsScene.com.)