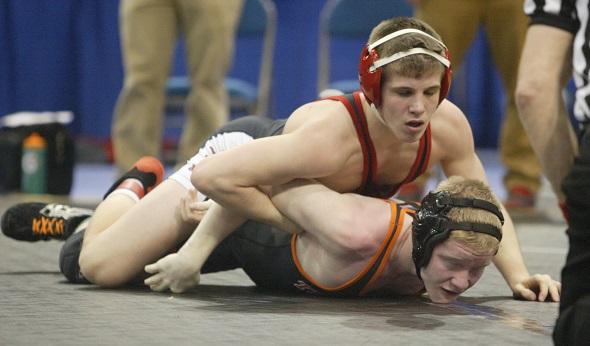 For the second time in three seasons, a St. Johns wrestler can finish his career as one of the MHSAA’s all-time greats.

Redwings senior Zac Hall will compete this weekend for his fourth MHSAA individual championship. Succeeding would make him the 18th ever to do so, joining recent additions to the list Adam Coon of Fowlerville in 2013 and former teammate Taylor Massa in 2012.

Win or lose, his run this weekend is sure to make headlines. But the Division 2 field appears wide open in terms of who might join him. Bay City Western’s Christian Schoenherr is back from an injury and shining again. Lowell’s Lucas Hall, Kanon Dean and Josh Colegrove are coming off helping the Red Arrows to a team title, and St. Clair’s Colton Pfaendtner and Eaton Rapids' Jaedin Slapsky are among those also not mentioned in much detail below – but don’t forget those names or any of the others that follow.

See below for 10 more contenders to watch this weekend, plus others who enter the tournament undefeated or coming off runner-up finishes in 2013. Follow all the matches beginning with Thursday's first round on a subscription basis live on MHSAA.TV, and click here for results at MHSAA.com. And check back with Second Half later Saturday night for full coverage from the Finals, including comments from all 14 champions.

119: Mason Smith, Clio junior (51-0) – Following up last season’s 112-pound championship and 55-4 record by moving up a weight and building a perfect record.

119: Zeth Dean, Lowell sophomore (32-4) – Last season’s runner-up at 112 fell by pin in that match to Smith, but looks good to force a rematch after also moving up.

130: Bailey Jack, Lowell junior (31-4) – Moved up to first place in his class last season after two lower finishes as an underclassmen, and can make it two championship weekends in a row after helping the Red Arrows to the team title in Battle Creek.

145: Steve Bleise, Chelsea senior (45-0) – Lone loss last season came by pin in the 135-pound Final, but he hasn't lost again and can add his first title to that second place, a fourth earned as a sophomore and a fifth achieved while wrestling at Dexter as a freshman.

171: Devon Pingel, North Branch sophomore (52-1) – Said after last season’s championship at 160 that he hopes to win four, and he’s off to another great start after beating a senior in 2013 to secure his first.

189: Angus Arthur, St. Johns junior (43-0) – Claimed last season’s championship at 171 after finishing fifth at 145 as a freshman for Lowell; combined for 14 losses over those first two seasons but is expected by some to finish this winter with none.

189: Garrett Stehley, Lowell senior (28-1) – Last season’s runner-up at 189 likely will have to face former teammate Arthur to win his first championship, but has improved every season from sixth as a freshman to fourth as a sophomore to second a year ago.