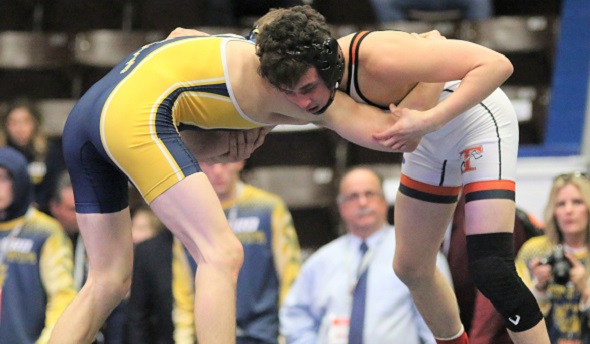 If seeds hold up this weekend, 11 schools will have representation atop the podium at the Division 2 Individual Wrestling Finals at Ford Field.

That wouldn’t be unprecedented; in fact, last season’s Division 2 championship matches produced winners from 13 schools. Gaylord celebrated two champions in 2018; St. Johns, Lowell and Holly are seeded to do the same Saturday.

Below, we look at 10 contenders to watch in Division 2, plus list everyone who finished at least as a runner-up in 2018 and all of the top seeds heading into this weekend. Surely we still missed a few who will end up rising to the top of the podium Saturday – but come back to Second Half early Sunday as we’ll interview and report on all 56 champions.

The “Grand March” on Friday begins at 11 a.m., with five rounds wrestled throughout the day including the semifinals at 7:30 p.m. Wrestling picks back up with consolation rounds at 9 a.m. Saturday, and concludes with the championship matches that afternoon at 3 p.m.

119: Vincent Perez, Tecumseh senior (49-0) – The top seed at 119 hasn’t lost since falling in last year’s 112 championship match to Gaylord’s Chayse LaJoie (see below), avenging that defeat at last weekend’s Team Quarterfinals with a 5-4 win. Perez also took third at 103 as a sophomore.

125: Chayse LaJoie, Gaylord junior (45-1) – The top seed at 125 is wrestling for his third Finals championship after winning 103 as a freshman and 112 last season. His only defeat this winter came last weekend to Tecumseh’s Perez in a rematch of last year’s title bout.

125: Chaise Mayer, Warren Woods Tower senior (40-3) – After finishing runner-up at 103 as a freshman and 112 as a sophomore, Mayer took third last year after entering as the top seed at 125. He’s back at that weight and on the opposite side of the bracket from LaJoie. Mayer’s losses this winter all came to wrestlers holding top seeds this weekend.

140: Avry Mutschler, Lowell senior (33-2) – After finishing runner-up at 135 last season, Mutschler enters as the favorite at 140 with his only in-state loss to reigning Division 1 champ Derek Gilcher from Detroit Catholic Central. Mutschler also finished fourth at 130 as a freshman and third at 140 as a sophomore.

145: Caleb Fish, Eaton Rapids junior (40-1) – Fish missed a first championship last season falling 6-4 to St. Johns’ James Whitaker (below) in the final at 140. Fish is the top seed at 145 this time, and his only loss was to Whitaker after also beating him this winter. Fish also took fifth at 135 as a freshman.

152: Austin Boone, Lowell junior (27-4) – The two-time champ is looking to add to titles won at 135 two years ago and 145 last winter. He’s the top seed at this weight with his two in-state losses to reigning Division 1 champs Kevon Davenport of Detroit Catholic Central (3-2) and Alex Facundo of Davison (3-1, sudden victory).

152: James Whitaker, St. Johns senior (31-2) – Although Boone is on top of this bracket, Whitaker has a path to meet him in the championship match. He won 140 last season and finished fourth at 135 as a sophomore, and his only in-state loss this season was to Eaton Rapids’ Fish.

171: Ryan Ringler, Cedar Springs senior (44-0) – The top seed at 171 is the reigning champion at this weight and a combined 97-1 over the last two seasons. He’s 199-8 for his career and also finished third at this weight as both a freshman and sophomore.