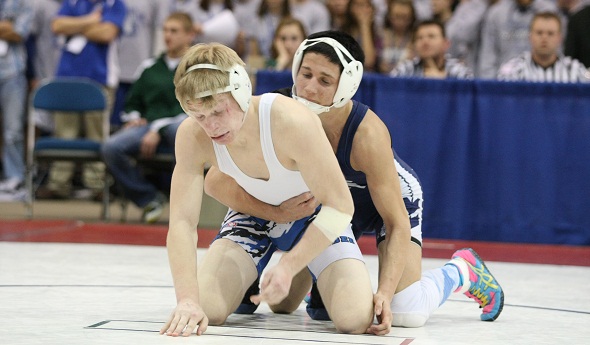 BATTLE CREEK – Nick Burg stepped on the mat for the biggest match of his life Saturday. He was shaking.

The state’s biggest wrestling stage wasn’t lost on the Richmond sophomore. Nor the fact his team was losing by a point and only two matches from seeing its two-year MHSAA championship streak broken.

“That’s what I’ve been training for my whole life. … I was a little nervous. I’m not going to lie,” Burg said. “I just knew I had to go out there and win. That’s what they said. We need you to win. Bonus points are extra.

He accomplished both – and in doing so set in motion the final touches of a 34-23 win over Dundee that continued Richmond’s dominance of Division 3 with a third straight title.

In what ended up the last to be decided of Saturday’s Finals at Kellogg Arena, No. 2-seeded Dundee won six of seven bouts through the middle of the match to take a 23-18 lead with three weights remaining.

Top-seeded Richmond’s chances still looked good. The Blue Devils (29-5) finished with three Individual Finals qualifiers against three Dundee wrestlers who will not compete next week at The Palace of Auburn Hills.

But freshman Austin Vannatter, Burg and senior Stephen Ireland still had to come through.

Vannatter pulled the Blue Devils within a point with a major decision in 112. And Burg then got back the lead with a pin in 1 minute, 28 seconds. Ireland merely needed to avoid a pin or technical fall, but finished with a pin himself.

“These kids have all been together since sixth grade, and they’re just gritty and tough,” Richmond co-coach Brandon Day said. “A lot of our state titles have been like this, 11 points or less, because the kids just fight for each other.

“Dundee’s a great program. They’re awesome, and Tim Roberts is a great coach. That’s why this isn’t the last time this is going to happen. They’ll be back, and we’ll be back.”

Dundee finished 17-8. Since winning its most recent MHSAA championship in 2007, the Vikings have finished runners-up four of the last five seasons.