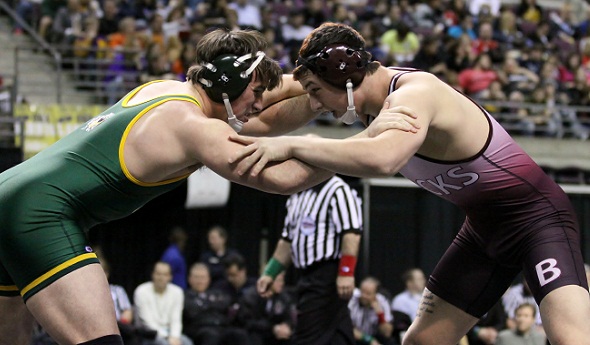 A total of 11 wrestlers – or nearly half of last season's finalists – will return to The Palace of Auburn Hills this weekend for another run at Division 3 championships.

Consider that a total of 11 wrestlers in this division also enter undefeated, and there should be plenty of stories to tell by the time the final round finishes up Saturday night.

See below for 10 contenders to watch this weekend, plus others who enter the tournament undefeated or coming off runner-up finishes in 2012. Follow all the matches beginning with Thursday's first round live on MHSAA.tv, and click here for results at MHSAA.com. And check back with Second Half later Saturday night for full coverage from the Finals, including comments from all 14 champions.

285: Josh Capen, Ithaca senior – Hoping to add an individual title to the football championship he helped win this fall; comes into this weekend 40-0.

119: Andy Caffrey, Parchment senior – Finished fourth at this weight last season, but enters this time 50-0 and arguably the favorite to finish first.

125: Zack Cooper, Whitehall senior – Won championships at 112 and 103 the last two years, respectively, for Remus Chippewa Hills; enters this weekend 50-0 in his first Finals for Whitehall.

145: Devin Skatzka, Richmond sophomore – A week after his team finished runner-up in Battle Creek, Skatzka brings a 48-2 record to Auburn Hills and will try to add to his 2012 title at 135.

152: Todd Olson, Dundee senior – Helped Dundee to the team championship last weekend and enters Thursday 46-3 and hoping to finish with another title after ending runner-up at this weight in 2012.

189: Dalton Bailey, Houghton Lake senior -- Last season at 171 became his school’s first finalist dating back to at least 1967, and can become the first champion Saturday after entering 37-0.

189: Donovan Fouchey, Oscoda senior – Bailey might be the favorite, but Fouchey is 46-2 and looking to finish first this time after ending second at this weight in 2012.