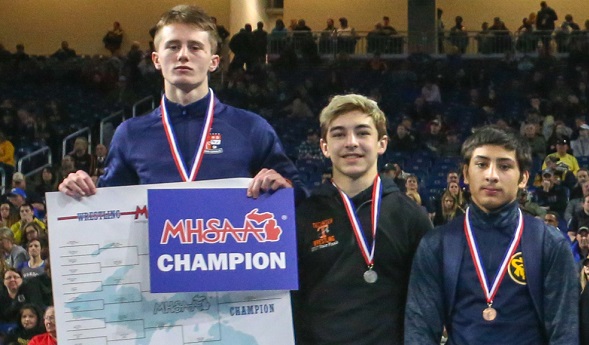 Sean Spidle is back where he started this run, and with an opportunity to finish it among the all-time greats in MHSAA wrestling history.

The Flint Powers Catholic senior, along with two others this weekend, will wrestle at Ford Field to become the 27th to win four MHSAA Individual Finals titles.

His first two were won in Division 3, at 103 pounds as a freshman and 112 as a sophomore. But Powers was Division 2 a year ago, and so Spidle claimed his second 112 championship against a different group of contenders. But he’ll be back in Division 3 this weekend, sharing the 119 bracket with the opponent he defeated to win his first title.

Below, we look at Spidle and nine more contenders to watch in Division 3, plus list all of the top seeds heading into this weekend. Of course, we likely missed a few who will end up among the biggest headliners Saturday – but come back to Second Half early Sunday as we’ll interview and report on all 56 champions.

The “Grand March” on Friday begins at 11 a.m., with five rounds wrestled throughout the day including the semifinals at 7:30 p.m. Wrestling picks back up with consolation rounds at 9 a.m. Saturday, and concludes with the championship matches that afternoon at 3:30 p.m.

112 Jordan Rodriguez, Chesaning senior (37-1) – After finishing third and then seventh at 103 his first two seasons, Rodriguez powered into the championship at 112 in 2019 before falling 6-2 to Hunter Assenmacher (see below). He’s the top seed at this weight, with his only loss this season to 125 qualifier Aidan Bernard of Montrose.

119 Hunter Assenmacher, Ida senior (44-1) – After falling to Spidle in the 103 championship match when both were freshman, Assenmacher may see him one more time – but now after winning titles at 103 in 2018 and 112 a year ago. His only loss this winter was to Macomb Dakota’s Brendan Ferretti, the Division 1 top seed at this weight, by 5-3 decision.

119 Sean Spidle, Flint Powers Catholic senior (33-0) – Last season’s Division 2 champion at 112 pounds also won 112 in Division 3 as a sophomore and 103 as a freshman. He will continue at Central Michigan.

135 Casey Swiderski, Dundee sophomore (35-1) – Last season’s champion at 103 made a big jump in weight and hasn’t missed a beat. His only loss came to an out-of-state opponent in December, and four of his wins came against Division 1 contenders including 125 top seed Andrew Chambal of Davison.

140 Christian Killion, Dundee senior (42-6) – The three-time placer and two-time runner-up is hoping to end his high school career with his first title win. Killion was fourth at 119 as a freshman, second at 130 (to four-time champ Jarrett Trombley of Lake Fenton) as a sophomore and just missed claiming the championship last year with a double-overtime loss in the title match at this weight.

145 Tyler Swiderski, Dundee junior (43-3) – Few of late have been able to claim a tougher-luck pair of past runner-up finishes. As a sophomore he fell to Spidle at 112, and last season Swiderski had to take on senior teammate Jonathon White in the final at 135 and lost 1-0. This season, his only in-state defeat came to Division 2 contender James Fotis of Lowell, and in sudden victory.

160 Stoney Buell, Dundee junior (41-3) – Buell is potentially on a four-title track, having won at 135 as a freshman and 152 last season and earning the top seed in this weekend’s bracket. Only one of his defeats this winter was in state, to Division 1 Manuel Rojas of Detroit Catholic Central by a point.

171 Dillon Kroening, Gladwin senior (48-1) – He’s back as the top seed at this weight after falling in last season’s championship match, and is a combined 98-3 over the past two seasons. Kroening’s only defeat this winter came in sudden victory in December against Division 4 contender Jacob Cassiday of Beaverton, whom Kroening had defeated a week earlier.

215 Luke Davis, Richmond senior (38-2) – Last season’s 215 runner-up fell just short a year ago losing in a 3-0 decision, but he’s back as the top seed. His only in-state loss this winter was a 3-1 decision to reigning Division 1 champion Brendin Yatooma of Detroit Catholic Central. Since that defeat, Davis has pins in 17 of 19 matches.

285 Grant Clarkson, Lake Odessa Lakewood senior (36-0) – He’s back as the top seed in this bracket after finishing third at this weight in 2019, his first as a Finals placer. He’s pinned all of his opponents but one this season (and not counting a handful of matches won by forfeit).

PHOTO: Flint Powers Catholic’s Sean Spidle (far left) stands atop the championship podium for the third-straight season in 2019 after winning a Division 2 title at 112 pounds. (Click for more from HighSchoolSportsScene.com.)