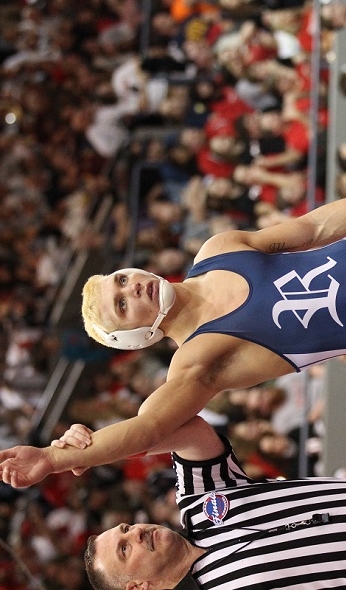 He helped his team to the Division 3 championship last weekend in Battle Creek and also to the title in 2012 – plus runner-up finished in 2013 and 2014. And this weekend, he’ll compete to join only 19 others who won four individual titles during their high school careers.

See below for 10 contenders to watch this weekend, plus others who enter the tournament undefeated or coming off runner-up finishes in 2014. Follow all the matches beginning with Thursday's first round on a subscription basis live on MHSAA.TV, and click here for results at MHSAA.com.

Those listed below are only a handful of the numerous contenders for this weekend’s Division 3 championships. Come back to Second Half at the end of this weekend, when we’ll have post-match thoughts from all 14 title winners.

112: Tristan Serbus, Corunna junior (37-7) – Corunna actually might have the two best wrestlers at this weight, with Serbus getting a lot of matches at heavier weights after winning the title at 103 as a freshman.

119: Aaron Kilburn, Richmond junior (40-6) – Last season’s champion at 112 also earned a third place at 103 as a freshman and is coming off helping Skatzka and their team with the Division 3 team title.

119: Devin Schroeder, Grand Rapids Catholic Central junior (43-1) – The reigning champion at this weight is the only wrestler to have beaten Division 2 favorite Lucas Hall of Lowell this season, and Schroeder’s only loss was to reigning Division 4 champ Logan Griffin of Erie-Mason.

145: Foster Karmon, Allegan junior (26-0) – The reigning champion at 125 moved up four weight classes in his third high school season and has yet to lose after finishing 58-2 as a sophomore title winner.

160: Devin Skatzka, Richmond senior (50-2) – As mentioned above, he’s looking to graduate with four titles and carries a 189-15 career record into this weekend.