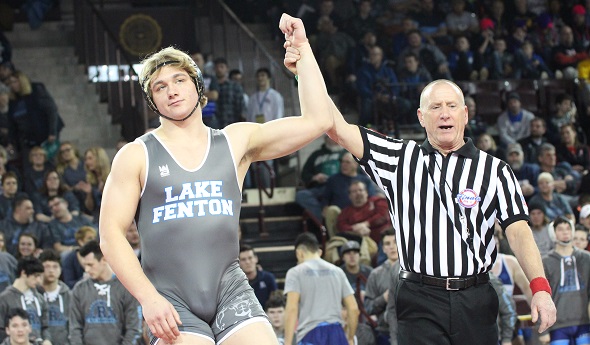 Three contenders at this weekend’s Division 3 Individual Wrestling Finals are competing for their third MHSAA titles, while eight past champions total will take to the mat starting with Thursday’s first round.

Those eight are among 10 favorites we’ve highlighted from a group of brackets featuring accomplished Finals veterans at just about every weight.

Follow all matches this weekend on a subscription basis live on MHSAA.tv, and click here for results at MHSAA.com. And come back to Second Half late Saturday and Sunday as we’ll interview all 14 title winners.

112: Anthony Gallagher, Perry senior (45-2) – After earning Perry’s first championship ever last season with a 2-0 Finals win at 103, Gallagher is the top seed at 112 – with that championship opponent, Lake Fenton now-senior A.J. Geyer, again on the other side of the bracket.

119: Dakota Greer, Howard City Tri-County junior (48-0) – The 2015 champion at 103 will look to climb to the top of the podium again as the top seed at this weight; an injury prevented Greer from finishing at his District in 2016.

130: Jarrett Trombley, Lake Fenton junior (53-0) – The two-time champion is in the midst of a second undefeated season after losing only once as a freshman, and returning off one of the biggest bouts of 2016 after stopping in overtime Grand Rapids Catholic Central star Devin Schroder’s pursuit of a fourth MHSAA title.

135: Nolan Saxton, Remus Chippewa Hills senior (54-0) – The top seed at 135 finished fifth at 130 last year while wrestling at Lakeview after earning another fifth place as a sophomore and a seventh as a freshman.

160: Sean Sterling, Dundee senior (24-0) – Sterling won one of the most hard-fought matches of the entire 2016 Finals, downing Croswell-Lexington’s Collin Lieber in overtime to win 152; he’s the only undefeated wrestler in his bracket this time.

171: Collin Lieber, Croswell-Lexington senior (40-0) – Last season’s heart-breaking loss to Sterling in the Final was the only defeat for Lieber in 2015-16; he’s finished top-three at his weight his first three seasons and will try to end with his first title.

171: Daniel Thompson, Lake Odessa Lakewood senior (41-1) – Thompson is the reigning champion at this weight, also winning in overtime last season by a point to claim his title; like Sterling last year, he could see Lieber in this year’s Final.

189: Brandon Whitman, Dundee junior (41-0) – Last season’s champion at this weight is going for his third title after also winning 171 as a freshman; he’s 89-1 over the last two seasons.

215: Jared Roehl, Millington senior (34-0) – After falling in last season’s 189 Final to Whitman by a mere 2-1 decision, Roehl will try to finish his career with a second MHSAA title; he won 189 as a sophomore and is wrestling for his second undefeated season over the last three as well.

285: Trent Hillger, Lake Fenton senior (55-0) – Last season’s 285 champ is now 172-0 over the last three seasons with two MHSAA titles, and had one of the most impressive runs in 2016 pinning his way to that second title and downing a reigning champion in the Final. He will continue at University of Wisconsin.

PHOTO: Lake Fenton’s Trent Hillger has his arm raised in victory after his match during Saturday’s Team Semifinal against Richmond.  (Click for more from HighSchoolSportsScene.com.)