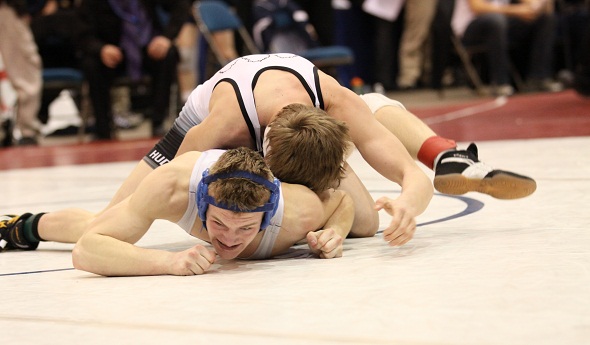 And the Tigers’ seniors will leave high school never knowing how it feels to lose a title match at Battle Creek’s Kellogg Arena.

Shelby made Saturday’s Division 4 Final as tough as any Hudson has won over the last four seasons. But after opening with a major decision win, top-seeded Hudson never trailed in claiming a 33-22 victory that gave five seniors four team championships.

“We come in day in and day out, bust our butts, and finally get to reap the benefits,” Hudson senior Devan Marry said. “It’s been more than just four years of high school. We’ve been doing this since middle school. And now it’s finally paid off.”

Since 1988, the start of MHSAA team championships being awarded using a dual-match format, only Dundee and Davison have won at least four straight – Dundee from 1995-98 and Davison five from 2002-06.

But No. 3-seeded Shelby – posting its highest team finish since 1972 – threatened to break the streak multiple times after outlasting No. 2 seed New Lothrop for a 29-28 Semifinal win that came down to Shelby having the most falls.

Hudson coach Scott Marry said his staff began scouting Shelby a month ago. Working out every possible scenario, he and his coaches saw Saturday’s Final coming down to as few as seven points – leaving little room for error.

Junior Austin Felt won a major decision at 103 pounds to pull Shelby within 26-19 with three matches to wrestle. Hudson sophomore Isaac Dusseau pushed his team’s lead back to 10 with a 6-2 decision at 112. But Hudson’s clinching win came in simply avoiding a heavy loss – freshman Tyler Roberts dropped a 4-0 decision to Shelby senior Will Foster at 119. But in avoiding any worse fate, he clinched the match win and the team championship.

Hudson (27-2) won only eight individual matches in the Final, to Shelby’s six. But four came from four of those seniors – Marry, Joel Varney, Luke Sparapani and James Herron.

“Every one of these seniors, I’ve known them for seven or eight years. They’re my boy’s best friends, and that’s a huge advantage,” said Scott Marry, also Devan’s father. “And I don’t think that just because this senior class was so good that this is the end of Hudson wrestling by any means. But those seniors had a big part of what happened today.”

Shelby’s Saturday was filled with heroics as well. The Tigers opened the Semifinal up 18-0 before falling behind and needing a major decision in the final match to force the tie-breaker scenario.

Shelby finished this season 33-3 and will send eight wrestlers to next weekend’s Individual Finals. 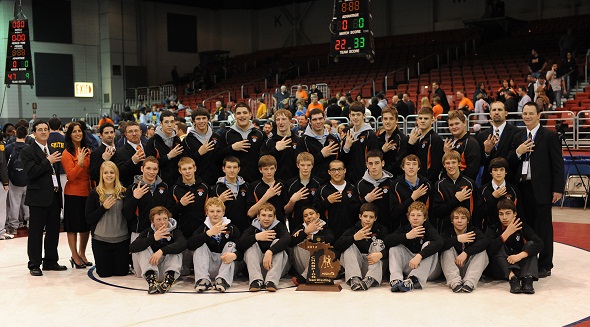