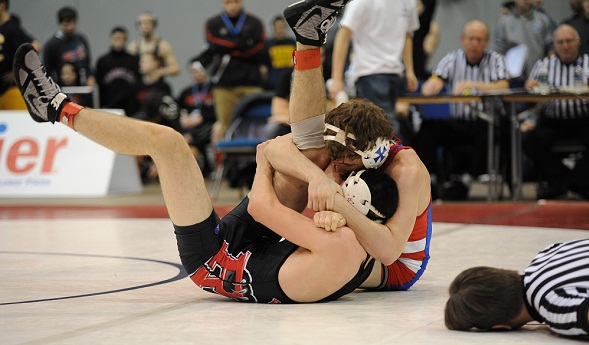 Championships have become a regular part of Alec Mooradian's high school wrestling career. In each of the last three seasons, he's emerged from the 16 best wrestlers at his weight in Division 1 to stand alone atop the awards podium as an MHSAA individual title winner.

This weekend, the Detroit Catholic Central senior can claim one more of those -- and finish a feat only 15 others have accomplished in the history of the sport in this state.

Mooradian and St. Johns' Taylor Massa -- who also has won three titles over the last three seasons -- can become the 16th and 17th wrestlers in MHSAA history to finish with four individual championships. Mooradian enters the weekend with a 44-2 record this season as he targets the 152-pound title; he's 40 pounds heavier than he was when he captured his first crown. His 206 career victories also rank among the MHSAA all-time career leaders and reflect years of dedication.

“I spend a ton of time doing extra things before or after practice," Mooradian said. "Whether it's working on technique, running, or spending time in the weight room I am always trying to do something extra; trying to outwork everyone."

Mooradian, a recipient of one of this week's Second Half High 5s, began his rise to prominence by capturing the 112-pound medal in 2009 with a 2-0 win over Holts’ Ben Matthiesen. That capped his freshman year with a 48-0 record.

He followed with a 59-1 campaign in 2010, finishing the year with a 119-pound title by downing Davison’s Brandon Shuart 3-1 in the Final. A year ago, Mooradian went undefeated at 55-0 and claimed his third individual MHSAA championship, this time at 135 with a win over Jake Weissend of Flint Carman-Ainsworth.

His latest wins came on two pins and a decision as the Shamrocks again won the Division 1 championship Saturday at Battle Creek's Kellogg Arena. He also played significant roles on the 2010 championship team and last season's MHSAA runner-up.

Technique and physical training make up a big portion of Mooradian's year-round training. But he also works hard to transfer his physical preparation to the mental aspects demanded by the one-on-one nature of wrestling.

“In my mind, matches are won before setting foot on the mat,” he said. “I have always strived to be a composed wrestler. This attribute allows me to stay in every match no matter what the score is, and it keeps me free of any nerves heading into a high pressure situation. Having a chance for a fourth state title is a great opportunity, and I look forward to it.”

Report was compiled by the MHSAA's Rob Kaminski.