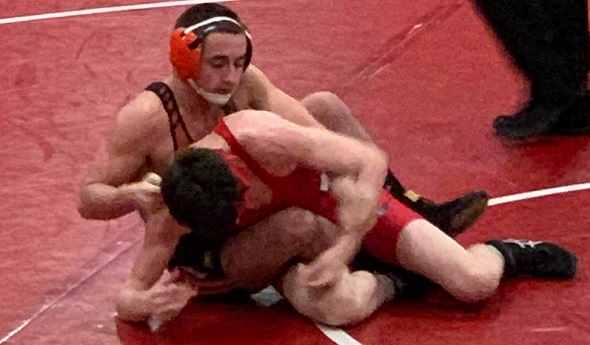 Although, that doesn't mean it's over for all U.P. wrestlers.

Seven grapplers will represent Delta County at the MHSAA Individual Finals this Friday and Saturday at Ford Field in Detroit after placing among the top four in their respective weight classes in Regional meets.

All of them got together for practice last week at Gladstone Middle School.

"This is going to help me a lot," said Bark River-Harris freshman Avery Corrigan, who placed fourth at 103 pounds in a Division 4 Regional at Charlevoix. "I have people here my size who I've wrestled before. It feels great to be going to the state tournament. I felt confident going into the Regional and saw kids I hadn't seen before. It's going to be challenging, but I just have to stay confident. You just give it your all and treat it like any other tournament."

It was teammate vs. teammate for a Division 3 Regional championship at Kalkaska as Gladstone freshman Michael Brazeau pinned junior Lane Matzke 4 minutes, 49 seconds into the 103-pound final.

"We practice together," said Brazeau. "It was hard to make a move. It was a lot less intense than other matches because we knew what was coming. I didn't really care who won.

Matzke had similar thoughts about the Regional title bout.

"I didn't really care who won either,” he added. “The semifinal was the one that really mattered. We started laughing when we found out we were both in the finals.

“I went to the state tournament in my freshman year. It gets the butterflies out knowing I've been there before. I can't wait to get back there."

“It's quite an atmosphere down there,” Hansen said of the Finals. “I was pretty nervous when I went down there last year, but I'm more excited about going this year. My goal is to go down there and take first. I have to stay focused, get the right food in my body and drink a lot of water. I have to try to stay in good position. Last year I got out of position. This has been a good year so far."

This will be the first visit to the Finals for Gladstone senior Nick Dawson (130), who took fourth in the Regional at his weight.

"It feels real good to be going," he said. "This will be a great experience. It's going to be hard. It will also be exciting. I went down there to watch last year and there were a lot of mats, which motivated me to go down there this year."

Escanaba junior Hunter Larson (135) goes to the Motor City with the most MHSAA tournament experience among those in this group. He earned a third place in a Division 2 Regional at Gaylord last weekend and took sixth at 135 pounds at last year’s Finals.

"I started slowly in the Regional, then I got energized and my wrestling improved," said Larson, who won the Regional the past two years. "I'm a little disappointed I didn't get my third Regional. It will be a little longer road this time, but now I'll just have to trust in my ability.

“It definitely makes me less nervous after being (in Detroit) before. Everybody is pretty good once you get this far. I'm pretty excited about going back there."

"I have to wrestle aggressive," he said. "Hopefully, this will be a good experience. This was definitely one of my goals for this year. This is a real tough division. There will be some tough wrestlers. My goal is to place in the top eight."