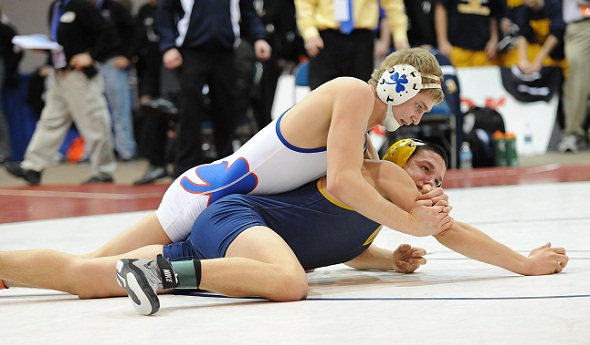 The eight teams wrestling in Division 1 this weekend at Battle Creek's Kellogg Arena have combined for 34 MHSAA team championships.

Some like Temperance Bedford going for a dozen or reigning champion Detroit Catholic Central trying to make it 10 titles, are plenty familiar with finishing as the last team standing. Others, like Hartland, could provide plenty of drama in pursuing a first championship.

Below is a look at all eight teams competing in Division 1, listed by seed. Their Quarterfinal matches begin at 3:15 p.m. Friday, with Semifinals at 9:30 Saturday morning and the championship match at 4 p.m. All matches this weekend will be streamed live on MHSAA.tv. For results throughout, check the MHSAA Wrestling page. Rankings below are from MichiganGrappler.com.

Record/rank: 23-11, No. 7
League finish: Tied for second in the Oakland Activities Association Red
Coach: Frank Lafferty, 10th season (197-117)
Championship history: Has never finished among the top two teams in Finals competition.
Individual Finals qualifiers: 112 Justin Kim (46-7) sr., 125 Josh Wood (13-0) sr., 140 Kaelan Richards (50-2) sr., 160 Dean Vettese (40-1) sr., 171 Shane Shadaia (32-6) jr., 189 Shawn Shadaia (48-1) jr.
Outlook: Rochester has won two straight District titles and is at Kellogg for the first time under Lafferty after beating No. 5 Oxford along the way. Wood was an Individual Finals runner-up as both a freshman and sophomore and is ranked number one in his weight class this winter. Shawn Shadaia also is ranked number one in his class, and total, five Rochester wrestlers are ranked among the top four at their weights.