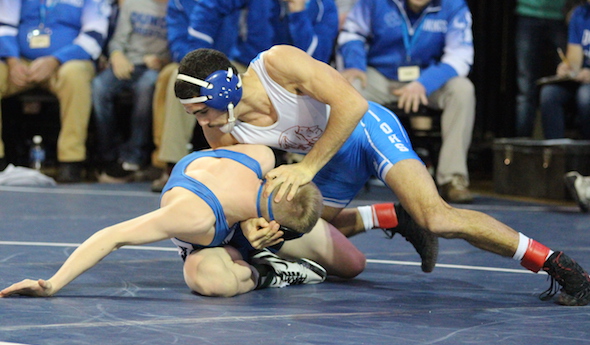 MOUNT PLEASANT — In case the championship banners and trophies weren't enough of a reminder, it wasn't necessary for an aging alumnus or a veteran coach to help Dundee's wrestlers understand the Vikings' tradition.

In their midst is a senior who has lived that tradition more than most who have come through one of Michigan's most successful programs.

Zach Blevins wrestled in an MHSAA team wrestling championship match for the fourth time in his career Saturday, as Dundee completed a perfect dual-meet season by beating Remus Chippewa Hills, 40-16, in the Division 3 Final at Central Michigan University.

Blevins beat Austin Spedowski by a 19-6 major decision at 140 pounds, giving him a 4-0 career record in championship matches at the Team Finals. In his career, he was 11-1 on Finals weekend, the only loss coming Saturday in the Semifinal, a 4-3 decision against Jwann Britton of Whitehall. Britton was third at the MHSAA Finals at 135 pounds last year, while Blevins was second.

Taking the mat before a sold-out crowd of more than 4,300 at McGuirk Arena, it felt like just another match for Blevins. It was his 26th career match at the Team or Individual Finals. He finished eighth at 112 pounds in 2013 and fifth at 125 pounds in 2014 to go with the second place at 135 last year.

"It helps a little bit, being down here all four years," said Blevins, who will wrestle at Eastern Michigan University. "You won't get as nervous, because you know what to expect. I was feeling confident and calm."

"He's really been a go-to guy and a very talented wrestler who has done a great job for us," 17-year Dundee coach Tim Roberts said. "In four years in the lineup, he's always stepped up and did his job well. I remember one year we needed him to get five takedowns in one period so we could get a tech, and he did that."

Blevins and Sean Sterling wrestled in the 2014 title match, as Dundee beat Richmond. Eight wrestlers who took the mat Saturday competed in the 2015 final match against Richmond, which won the last three matches to erase a 25-12 deficit and win, 27-25.

"We just worked really hard all year to make sure it wouldn't happen again, and it paid off," Blevins said.

Although the Vikings won by 24 points, it could've been a different outcome had Dundee wrestlers not come from behind in the final seconds of three matches.

Tyler Orrison, who was sixth at 125 pounds last year, got things started for Dundee by twice scoring in the final seconds of periods in a marquee matchup with Slade Todd, who was sixth at 135 in 2015. Orrison scored three points at the buzzer in the second period to take a 7-6 lead in the 135-pound match. He then won the match, 9-8, with a two-point reversal with 16 seconds left.

At 171, Dundee's Kyle Motylinski scored two points with 12 seconds left in the third period to tie his match with Luke Henderson, 2-2. Motylinski won 4-2 in overtime.

"That was a case of they've been here before," Chippewa Hills coach Nate Ethridge said. "Give all the credit in the world to Dundee. They did a heck of a job and knocked us off; they deserve it. We needed those three and we didn't get those three. Then we had to do some things with our lineup that we didn't necessarily want to do, because we had to win out."

Dundee didn't have much lineup flexibility, with only 15 healthy wrestlers. Drew Mandell, who was eighth at 130 pounds last year and a participant in the 2014 team championship match, was on crutches after breaking his leg. District champion Grant Ott had an arm in a sling because of a separated shoulder.

"These guys kept stepping up and gutting it out," Roberts said. "You saw all those last-second wins we were getting there. That's just a testament to guts, and the guys kept wrestling."

Roberts said Dundee typically has about 24 wrestlers, but had a low turnout this season. An Individual Finals qualifier was among those who chose not to come out.

How does that happen to a program with Dundee's tradition?

"You tell me," Roberts said. "The culture can change where it's not cool to wrestle, then we get to win state. It makes it that much more satisfying that these guys pulled together and did it. I'm really proud of this group. Whenever we had injuries, we had guys cut down in weight to make us stronger. Guys stepped in and really sacrificed to make this team better."

Dundee (21-0) reached the title match by beating Delton Kellogg, 63-13, in the Quarterfinal on Friday and Whitehall, 39-18, in the Semifinal on Saturday.

Sterling, White, Zachary Bellaire and Brandon Whitman were 3-0 on the weekend for Dundee. Sterling and Whitman won all three of their matches with pins, with neither of their matches lasting beyond the second period.

"My early memories were when I was in fourth grade," Whitman said while holding the championship trophy. "We were always watching Dundee. My brother was in high school a couple years before I was. It was always fun watching him. The expectations are high. When you come into the room, you've got to work as hard as you can every day."

Brendan Barry, Billy Koepf and Austin Young had 3-0 records on the weekend for Chippewa Hills (31-2), which was making its first appearance in the title match. The Warriors historically were 2-8 on Finals weekend before beating Gladstone, 48-24, in the Quarterfinal and Lake Fenton, 31-27, in the Semifinal.

The Warriors have nine qualifiers for next weekend's MHSAA Individual Finals, with only one senior among that group.

"We've been close a lot of times," Ethridge said. "Obviously, we had a heck of a weekend to get where we're at. Our kids are great. They train really hard. They're pretty awesome."

PHOTO: A Dundee wrestler, left, and his Chippewa Hills opponent work for position during Saturday’s Division 3 Final. (Click to see more at HighSchoolSportsScene.com.)