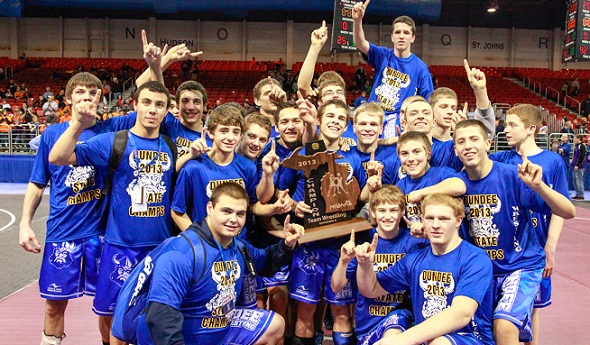 BATTLE CREEK – A few minutes after winning the MHSAA Division 3 championship on Saturday, some members of the Dundee wrestling team picked up Sean Keilitz and put him on their shoulders.

Was Keilitz an unlikely hero? Certainly. A junior, he came into his match at 119 pounds with an 18-16 record, including a loss earlier in the day in the Semifinals and another Friday in the Quarterfinals.

Keilitz, however, was deserving of being hoisted on the shoulders of his teammates. He scored a key 12-8 decision in the 119-pound match – the second-to-last match of the meet – as Dundee defeated three-time defending MHSAA champion Richmond 35-26 at Kellogg Arena.

Dundee (23-2) had finished runner-up four of the last five years since winning the title in 2007. Two of those runner-up finishes came against Richmond.

“Winning state is always great, I can tell you,” Dundee coach Tim Roberts said. “I’ve done it a few times, and it doesn’t get old and it doesn’t get any less great. But to beat a team the quality of that team and as well as they wrestled against us, that was a great win.

“Winning at 119 was huge. Their kid is a state qualifier, and our kid – I wasn’t able to enter him in the District because he wasn’t healthy. That was two kids just battling right there, and Sean stepped up and won that match.”

Dundee freshman Zach Blevins stepped in and won with a major decision, giving the Vikings a 29-26 lead and setting the stage for the match between Keilitz and Richmond freshman Graham Barton.

“I knew I had to win,” said Blevins, who had a 5-0 lead after the first period and nearly picked up a pin late in that period en route to a 15-2 victory. “I was really nervous, but I knew we would be able to finish it out.”

Keilitz and Barton had a closer battle. Keilitz had a 7-4 lead going into the third period, but Barton, who came into the match with a 21-21 record, cut it to 9-8 before Keilitz scored the last three points.

“It’s just unreal,” Keilitz said. “I was looking up at the scoreboard, and I honestly wasn’t even nervous for once in my life. I was just so pumped up. It was so exciting.

“It was scary, but I was so pumped up that I wasn’t even worried about it. I just went out there and did my job.”

The victory left Dundee with a 32-26 lead going into the final match. All Dundee junior Brendan O’Connor had to do was avoid a pin to secure the MHSAA title. However, a pin would have tied the match and caused it to be decided by the sixth tie-breaking criteria.

But O’Connor was never in danger of being pinned and went on to post a 14-8 decision.

Richmond (26-5) won four of the first five matches to build the 19-4 lead. Alex Muzljakovich (130) and Nate Henke (145) each won by fall, while defending individual MHSAA champion Devin Skatzka won by major decision at 152 to improve to 48-2. Senior Austin Cattera (135) also won by decision for the Blue Devils.

The lone victory in the first five matches for Dundee was by junior Doug Rojem, whose major decision at 140 improved his season record to 46-1.

Dundee junior Todd Olson grabbed some momentum for the Vikings with a first-period fall at 160 to improve to 46-3.

Tye Thompson’s decision at 171 cut Richmond’s lead to 19-13, and junior Teddy Warren followed with a first-period fall at 189 to make it a 19-19 match and improve his record to 46-2. After Jack McKiernan won by decision over Dundee senior Jay Sroufe to improve to 48-5, Richmond had a 22-19 lead with five matches remaining.

Dundee senior John Marogen took the mat on a mission at 285 and registered a first-period pin to give the Vikings a 25-22 lead. Marogen had won seven consecutive matches in the Quarterfinals, Semifinals and Finals, dating back to the 2010 Finals when he won a majority decision against Richmond.

“This is just amazing,” Marogen said. “It’s the best feeling in the world. I knew I had to go out and get a pin.”

Marogen used the word “scared” twice; one while talking about his feelings when Dundee was down by 15 and again when he described his feelings as the meet went into its final matches.

“I was really scared,” he said of when the team was down, “and I was scared (late in the meet), but those kids are tough. I’m really proud of them.”

Marogen wasn’t the only one who was scared when Richmond threatened to win its fourth consecutive MHSAA title.

“It was kind of scary at first, I’m not going to lie,” Keilitz said, “but once we got those pins, we got rolling.”

Nine of the 14 Dundee wrestlers who had a match in the Final wrestled in last year’s as well against Richmond. Keilitz is the only one who lost last year and won this year. Meanwhile, Blevins, Rojem, Olson and Marogen each went 3-0 this year in the Quarterfinal, Semifinal and Final.

“This is amazing,” Sroufe said. “We’ve been working for it for four years, and it feels awesome. It’s the best thing that has ever happened to me right now.

“I knew our team was going to push it to the end, and I knew we could beat them.”