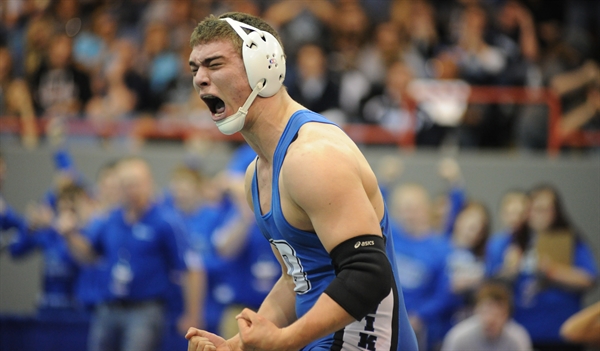 BATTLE CREEK – A “cement job” by Ryan Heiserman of the Dundee wrestling team on Saturday paved the way to the MHSAA Division 3 team wrestling championship at Kellogg Arena.

Heiserman used what the team calls a “cement job” to pin his opponent at 160 pounds, and it sparked Dundee to its second consecutive Division 3 title with a 34-24 victory over Richmond. It was a rematch of last year’s championship match, which also went to Dundee, 35-26.

“That pin was huge,” Dundee coach Tim Roberts said. “Over the head and under the arm and take it to the back – we call it a cement job.

“I call it a state championship.”

Heiserman, a senior who had never wrestled in an MHSAA championship match, was not a heavy favorite despite a 32-9 record.

He trailed 1-0 into the second period but suddenly took control and pinned his opponent with the “cement job” 3 minutes and 5 seconds into the match. The “cement job” seemingly happened in a matter of seconds.

“I just went out there, and I didn’t think I was going to get it,” Heiserman said. “I didn’t even know who the kid was, and it kind of scared me getting sent out there. It was really exciting when I got it, but it was a tough one to get.

“I’m surprised. My body just flew right over the top and sunk right in on top of him. It’s probably one of the best feelings I’ve ever had in my life.”

Richmond had won the first three matches by decisions to grab a 9-0 lead, but back-to-back technical falls by Zach Blevins (119) and Brendan O’Connor (125) gave the Vikings a one-point lead. Richmond regained the lead with back-to-back decisions before Dundee senior Doug Rojem won by decision at 140 to cut the deficit to 15-13.

At that point, there had not been a pin in the Final, but Dundee senior Sean Marogen changed that just 53 seconds into his match to give the Vikings a lead they would never relinquish.

“It’s my senior year,” Marogen said. “I just really wanted to do something big for my team. We worked hard all season, and we just wanted it more.”

Last year, Marogen lost his match in the Final and watched his brother John close out his dual-meet career with a win. He wanted to match his brother in that regard.

“He’s inspired me a lot, and we all push each other,” Marogen said. “It’s just awesome.”

Marogen’s pin gave Dundee a 19-15 lead going into Heiserman’s pivotal match, and the Vikings had strong wrestlers Tye Thompson and Teddy Warren ready in the next two. Heiserman’s victory clinched the championship in the eyes of many Dundee wrestlers and fans. 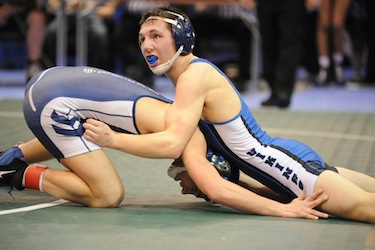 “I felt pretty good,” Roberts said. “I knew with Tye Thompson coming that we were in good shape – and we won the toss, so I knew they had to put their guy out at 189, which gave us the right guy to put on the right guy.

After Heiserman’s win, Thompson and Warren did what was expected of them. Thompson won with a 9-2 decision, setting the stage for Warren, who only needed a decision to clinch the win for his team. But with the crowd chanting, “Ted-EEE, Ted-EEE, Ted-EEE,” Warren wanted to end his dual-meet career at Dundee with a pin to clinch.

“You can’t really think of a better situation for a senior,” Warren said. “I’m glad I got to help out and seal the deal, but it really was a team effort. A lot of kids helped keep their matches close, and that’s really what won us the dual.

“Right after our 171-pounder won, I knew we were going to win because I knew there was no way I was going to get pinned or give up any bonus points.”

Skatzka is the defending individual champion at 145.

“Last year, we just had a lot of pressure because we wanted to overcome, and this year it was just fun,” Marogen said. “We just came to wrestle; that’s all we wanted to do.”

Dundee has been in the Finals in seven of the past eight seasons and won three times during that span.

Dundee and Richmond have met in the Finals in four of the past five seasons.

“I have a ton of respect for them because they do such a good job, and every time to beat them at all, it’s a big deal because they’re so good, and they are at their best here,” Roberts said. “People will beat them during the season and say, ‘Ah, Richmond isn’t that good this year,’ and I say, ‘Try to wrestle them at the end of February and see what you think.’ They have it together.”

“I think we have a ton of mutual respect between each other,” he said. “Tim Roberts, he does what it takes to win. He puts the time in just like we do. The kids decide it; it is what it is.

PHOTOS: (Top) A Dundee wrestler lets out a celebratory yell during Saturday's Division 3 championship match. (Middle) Richmond and Dundee wrestlers do battle in the third straight MHSAA Final match between the teams. (Click to see more at HighSchoolSportsScene.com.)