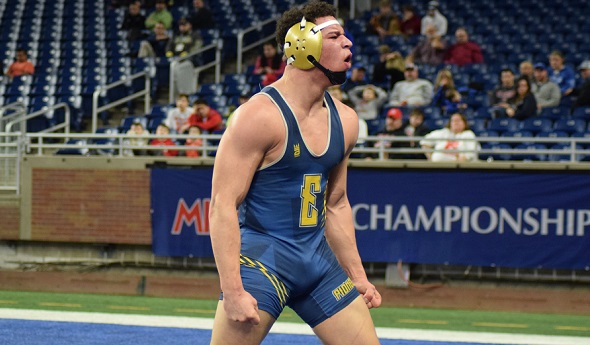 EAST GRAND RAPIDS – Over the past three weeks, John Shelton IV has established a new school record for wrestling wins while also reaching a rare milestone with his 150th career victory.

While most would be elated and content, the East Grand Rapids senior wants more and has his sights set on an even bigger goal.

“To be honest, it was a stepping stone for me, and it wasn’t that big of a deal because I’m trying to win a state title,” Shelton IV said. “It’s a cool accomplishment in the sport, but I would rather have a state championship. That’s what I really want, and it is the biggest milestone I can get right now.”

Shelton IV, who wrestles at 189 and 215 pounds, is a three-time MHSAA Finals qualifier. However, an individual championship at that highest level has eluded him.

“Last year I was pretty confident that no one could beat me, but there is always someone out there that can give you a good battle and he gave me a good battle,” Shelton IV said. “I guess I wasn’t really battle-tested and I wasn’t ready for the match. You can’t get complacent and I got complacent, I feel like, toward the end of the year.”

Shelton IV notched his 100th win early in his junior season and surpassed the previous school record of 147 wins, set by Doug Dozeman.

“Obviously for a kid to hit 150 wins is unbelievable, and I grew up in Illinois where 150 wins is unheard of,” East Grand Rapids wrestling coach Eric Dietz said. “And just to do it at the weights he has done it at. Most kids get a lot of wins wrestling at the lighter weights as freshmen and sophomores, but he came in right away wrestling 18-year-olds as a 14-year-old.”

The loss in last year’s Final didn’t sit well with Shelton IV, but it has fueled his motivation both physically and mentally.

“He took it hard, as it would anybody whose goal it is to win a state title,” Dietz said. “Getting there and losing by a takedown ate at him over the offseason more and more, and in the weight room he seemed more focused to go out and secure that goal. The 150 wins was just something on his way to achieving his goal.”

Shelton IV won tournaments at the state and national level while in middle school, but said the ultimate cap to his high school career would be an MHSAA Finals crown. 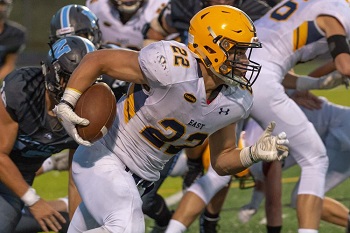 “It’s the most motivation I’ve had. And if I don’t win it, it wouldn’t necessarily be a failure, but I’ve dreamed about it since I started wrestling in high school and I really want to accomplish it,” he said. “My life has revolved around sports, and I think a state championship is the best thing you can do in high school – so that’s what I want to do.”

Shelton IV is 25-0 this season, with the first rounds of the MHSAA Tournament looming next month.

“I wish I would’ve wrestled more ranked guys and had more competition to get ready for the postseason, but I think I’ve wrestled pretty well,” Shelton IV said. “There’s always room for improvement, though.”

Shelton IV will take his talents to Central Michigan University, where he will wrestle and also play football.

He led the Pioneers to the Regional Finals in football and rushed for 1,661 yards while scoring a team-high 25 touchdowns.

“I thought I was skilled enough to play both in college, but I didn’t know how I would balance it,” he said. “I know it’s going to be tough, and I thought it would be in football and baseball. I didn’t think it would be football and wrestling.”

Shelton IV suffered a knee injury during baseball season and didn’t continue. He’s looking forward to wrestling under the same coach as his dad did in high school.

“I like the school a lot and my dad told me great things about Coach,” Shelton IV said. “I think he can really help me get to my full potential, and I have a lot of buddies there.

“I think I’ll be able to get comfortable there really quickly, and I’m really excited to compete against guys around the country and not just my state.”

Shelton committed for football during the early signing period, although he’d had his doubts after the Chippewas went 1-11 two years ago.

Central Michigan experienced a turnaround, however, this past fall under first-year coach Jim McElwain and finished 8-6 en route to a spot in the MAC championship game and a bowl berth.

“I’m really excited to go there now and play for McElwain,” Shelton IV said. “They had a good season, and who doesn’t like being around a winning team?”