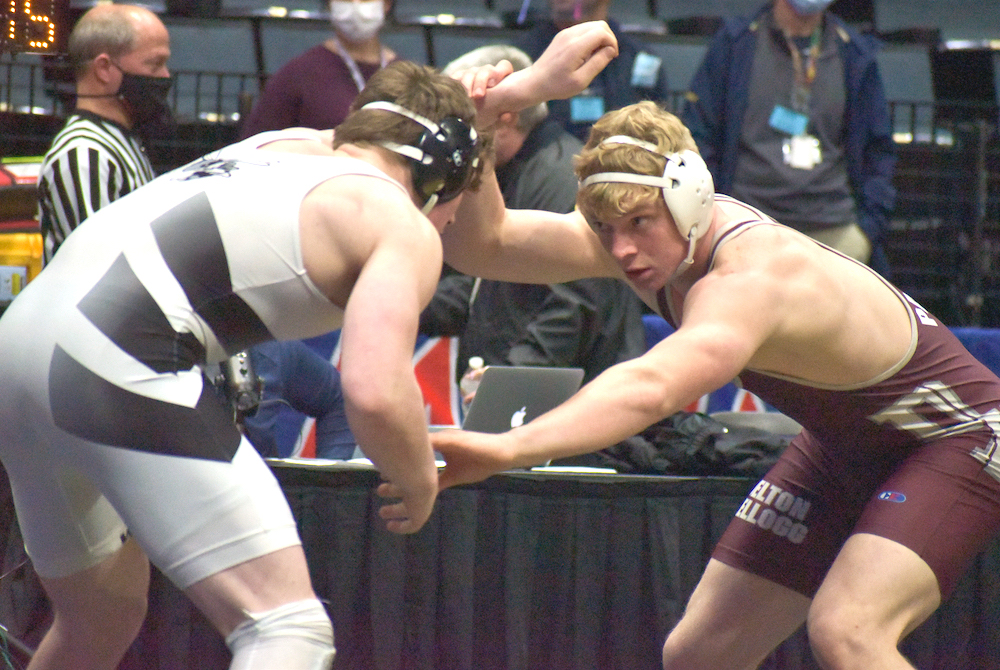 His brother, Tyden Ferris, was a two-time runner-up at the MHSAA Individual Wrestling Finals, so with a win Saturday at the Division 4 championship meet, Caden would have one up on big brother.

The Delton Kellogg junior won those bragging rights and his first title with a thrilling 13-11 overtime victory against 2020 champion Camden Orr of New Lothrop in the 215-pound Final at Van Andel Arena.

“I was obviously very tired, but I was counting on that he was more tired than me,” Ferris said. “I just guess I had more will to win.”

Ferris (33-2) trailed Orr 7-1 at one point, and 10-7 late in the third period before getting a pair of takedowns to send the match to overtime, where he secured the winning takedown. As he was trailing early, Ferris said his thoughts floated to the sibling rivalry.

“I gotta beat my brother in something,” Ferris said of his thoughts. “He never got first.”

Ferris, who has committed to Central Michigan, came into the meet as the top seed, as he technically already defeated Orr in the Regional Final. Orr (24-2) injury defaulted that match, however. Despite missing the opportunity to wrestle Orr in the Regional, Ferris knew what he was up against.

“I knew he liked to shoot, and my favorite move the underhook, and I know he likes the fireman that counters that,” said Ferris, who placed eighth at 215 pounds as a freshman but didn’t wrestle in the Finals as a sophomore. “I practiced a lot of defense, mostly offense.”

Younts already had quite a start to his high school career, helping to lead Clinton to a Team Finals trophy this past Tuesday. Now he can add an Individual Finals title after a dominant performance.

He pinned his first two opponents on the day, before shutting out the final two, 10-0 in the semifinals and 5-0 in the Final.

Younts was one of an MHSAA-record 11 Clinton wrestlers in the Finals.

Perry battled a leg injury and his own teammate to claim an individual title in his first season.

The two wrestled each other four times this winter, with Perry coming out victorious in each matchup. A third-period takedown was the difference in the latest bout.

“It’s been close every time,” Perry said. “It’s tough. When it gets down to this point, it’s very emotional. It’s on your own, too, because obviously (Clinton coaches) can’t coach, so it’s on pretty much both of us to determine what we do.”

Sturtevant-Roesly wasn’t sure how his season would go after dislocating his kneecap and tearing a ligament in his knee.

After finishing seventh at 103 as a sophomore and sixth at 112 as a junior, he reached the top of the podium with a hard-fought victory.

“I’ve been through a lot this season,” Sturtevant-Roesly said. “I wasn’t sure how this season was going to play out for me, but I came out and we did it. It’s everything. I’ve been working for this for a long time, and I really wanted it today.”

Frailey has been on the podium before, finishing eighth at 119 in 2019, but he always envisioned himself at the top of it. Thanks to a late second-period takedown, it’s now more than a vision.

“It’s like nothing else,” Frailey said. “I’ve always imagined this moment in my head a billion times. It really lived up to it, and it’s just amazing.”

After Frailey’s victory, he was able to stand matside and watch his teammate, Chris Sorrow, claim his own title at 135.

“It’s just amazing,” Frailey said. “We really fuel each other – he helps me, I help him. We’ve come up together, so it’s indescribable.”

Brumm had a 5-0 lead in the match before Marry was injured and unable to continue.

“It’s always been a dream of mine,” Brumm said. “I’ve worked hard, and I think I deserve it. It’s a miracle to me. I’ve done everything I could for it.”

After placing sixth as a junior and seventh as a sophomore – both times at 135 – Sorrow decided to go big this year.

A seven-point third period, including five points from nearfalls, gave him his first Individual Finals title.

“I wasn’t necessarily going for that, but if I saw an opening where his weight shifted, I just took it as far as I could,” Sorrow said. “I’m ecstatic.

“Like (Frailey) said earlier, we’ve been training since sixth grade for this. To come here and accomplish this in our senior year together, back to back, is just a great feeling.”

After finishing sixth at 140 pounds as a sophomore, Stone committed himself even more to wrestling this past offseason, and it paid off with a dominant performance in the Finals.

He earned a takedown in each period and added nearfall points in the third to claim his first title against previously unbeaten Ames.

“I’ve been working hard all year,” Stone said. “I wanted to leave it all out there. I had nothing to lose. It was a great match. I just went in and tried to attack as much as possible. To come from sixth last year as a sophomore to a state champion, it’s surreal. I couldn’t have even imagined this. I’ve visualized this moment multiple times, and the feeling is still there.”

Natale was making his third appearance in the Finals, coming off a championship performance at 130 in 2020 and a runner-up finish at 119 in 2019.

While he was wrestling with torn ligaments in his right knee, he took inspiration from a friend who had passed away to fuel him in a hard-fought battle against McCombs, who was a runner-up at 145 a year ago.

“I lost a good friend not too long ago,” said Natale, who also had a third-place finish as a freshman. “I wore a shirt last year, wore a shirt this year. I got blood time and I was like, ‘I need to do this. It’s not just for me right now, it’s for him.’ It was an old club team of ours, Inflict Wrestling, and that’s what I do. I just keep going and I inflict damage, and I just pulled it out because I was just better on my feet.”

Wilmoth took a giant leap forward this season, going from not making the podium as a sophomore, to Finals champion as a junior.

“He was someone standing in the way of my goal, and I had to beat him,” Wilmoth said. “I was coached up well for this match, and I just went out and hammered.

“It’s a relief. I’ve been looking forward to this since like seventh grade. It’s a weight off my shoulders, and it feels great.”

Baxter was also a runner-up at 103 as a freshman and fifth at 119 as a sophomore. 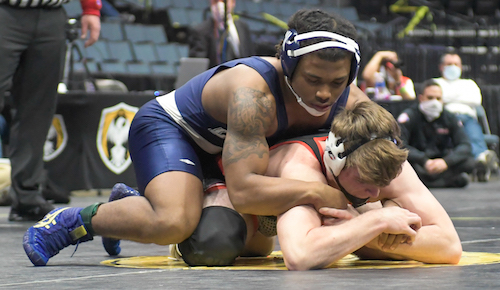 In the third postseason matchup between the two, it was Konz who came away with the most important victory.

The match was tied at 1-1 deep into overtime, and the Clinton senior fought off a leg attack from Foster to come up with a takedown on the edge of the mat and get the victory.

“I just pulled his arm out and I felt the Merkel,” said Konz, who added his title to a pair of third-place finishes and an eighth-place finish in his career. “I grabbed it, and they gave me two for it.”

Foster is the only wrestler at Loyola, and finished seventh at 140 a year ago while wrestling for Harper Woods.

After years of coming close, Randolph was able to add an individual title to his two team trophies. He finished as runner-up at 171 and 160 the past two seasons, and was third at 160 as a freshman.

He was dominant on his way to securing his title, pinning his first three opponents in 37 seconds, 1:19 and 2:33.

“This year I’ve been through so much, especially family-wise – I lost my grandpa in November,” Randolph said. “This one was for him. Just getting over adversity through COVID and all that, it means a lot to come out here and do what I love to do, and that’s wrestle.”

Badge moved one step closer to becoming a four-time champion, as he wrapped up a dominant day with his third individual title.

He won at 189 as a sophomore and 215 as a freshman. On Saturday, he cruised to first-period pins in his first three matches, winning in 43 seconds, 1:22 and 1:12. Belew, who placed fifth at 171 as a junior, presented a different challenge, but one that Badge was able to overcome.

“Right now, just one more state title to go,” Badge said. “The team is going to be going good for the next couple years; we have a great program. It’s pretty sweet because the guys that are coming are going to help our lineup even more, and we have 11 in the Finals.” 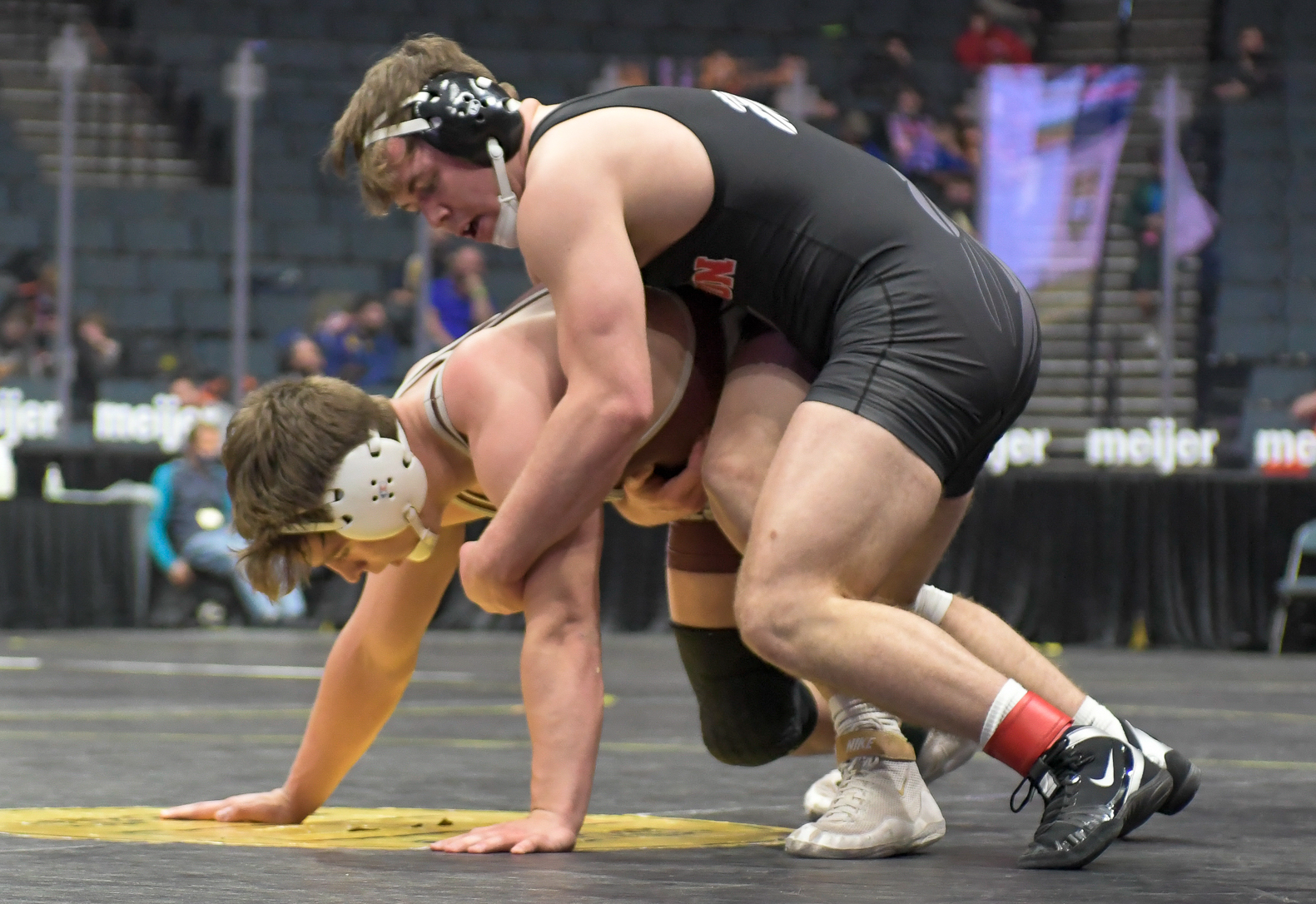 Pasik moved up the podium with a dominant day. He cruised into the Finals with pins in 54 seconds, 3:35 and 1:41 before pinning Fischer in a rematch of the Regional Final.

In the championship match, Pasik was able to get an early takedown and take Fischer to his back in the opening minute before turning him again to earn the fall.

Pasik was coming off a third-place finish at 285 as a sophomore.