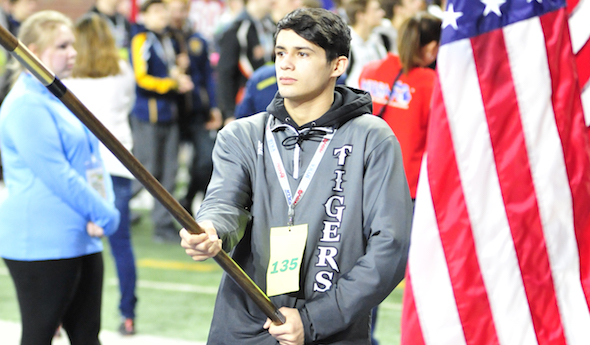 "This is pretty cool; it's a big honor," Hamdan said. "To see all these greats do this before me, I have looked up to them since I was really, really small."

Hamdan, who will wrestle at Michigan State next season, made easy work of the competition this weekend, pinning two of his opponents and beating the other two by technical fall.

"This is a bit overwhelming, a lot to take in," said Hamdan, who also has three team Finals titles on his impressive resume. "I did feel a little bit of pressure, but I would treat this just like I would in the practice room."

Mears had come close to winning state titles in his youth wrestling days, but was never able to get to the top of the podium.

It took a trip to the high school sport's biggest stage to finally break through.

"I've taken second, third, fourth and fifth, and now I finally got to win one," Mears said. "I came out here to wrestle my best match, and I think I did and I got the win."

It is hard to lose when you don't give up a point.

That is what Modert accomplished this weekend on his way to winning his second straight title.

He did not surrender a point to his four opponents, capping it off by beating Datema in the final, 7-0.

"I made sure I stayed in control and wrestled as smart as I could," Modert said. "My goal this whole weekend was to not give up any points, and I accomplished that. I just tried to dominate as much as I could."

It is never one person who is responsible for molding a state champion.

It is a process, and Altland made sure he thanked all who helped him win Saturday.

"Hard work, dedication, my teammates and my coaches got me here," Altland said. "And I have great supporters who all helped me get here. It has been a long run, but worth it."

Comar has a hard time looking back, but reflection helped get him back on top of the podium.

Two years ago the Clinton senior won a title, but he fell in a final last year.

"I think (last year's loss) pretty much drove me," Comar said. "I came here this year to have fun and score points. I had a good tournament this year."

Comar finished his weekend with two pins, a technical fall and Saturday's decision.

A couple of heart-breaking trips to the Finals helped pave the way for Ward to win his first title.

Two years ago he was a finalist, but was handily beaten 10-0. Last year he fell in the semifinals, so this year he was not going to take anything for granted.

"I have been dreaming of this since I was a little kid," Ward said. "Losing two years ago in the finals 10-0, it never gets out of your head. Just being there and being so close. And then last year I thought I would make my way back to the finals again, and I got upset in the semis, so this year I would not let that happen."

Crespo looks very comfortable wrestling on his sport's biggest stage in the state.

The Mendon junior cruised to his third straight Finals championship. And now Crespo is on the brink of history, as he will try to become a four-time champion next year.

"I felt great this weekend," Crespo said. "I felt like no one could even touch me. I only gave up two points all weekend off of cuts – no one even came close to me."

And it is that confidence that has Crespo thinking about history next year.

"I'm looking forward to getting back and getting better," Crespo said. "I want to get better now, because that four is so close and I have been waiting for that so long."

This is not how Wolford wanted to end his high school wrestling career, even though it meant winning his second straight championship.

Wolford was visibly shaken as his opponent, White Pigeon's Black, had to be taken off the mat on a stretcher after suffering what appeared to be a knee injury.

"I have no words. I just feel bad for what happened," Wolford said. "That is not the outcome that I wanted. I won, but that is not what I wanted. That was not a state championship match."

A spent Simaz laid sprawled on the turf at Ford Field after what he had just accomplished.

The Traverse City St. Francis junior had battled his way to an overtime win over Sereno, and he had a hard time finding the words to describe his thrill.

But he knew in his head the thrill was coming.

Seida knew he had two very excited fans when he walked off the mat with a title in hand.

He could almost hear the cheers from the Ford Field stands.

"I have been working for this my whole life, and this is the best thing that has ever happened to me," Seida said. "My dad (Phil Seida) was going crazy up there, and he is definitely appreciative. And my grandpa (Eric Seida), he kept telling me that this was the best part of his life. I did this for him because he wanted me to for the last four years."

Scroggie did what he does best, and that is wrestle on his feet. It was a takedown that was the difference in his one-point win over Nelson.

"This feels amazing," Scroggie said. "My coaches kept me in the neutral position because they know I am good on my feet. So I did what I do best and got the takedown, and I knew there was short time after that so all I had to do was just lay on him."

In one of the most anticipated matches of the Division 4 Finals, a pair of returning champions took to the mat at 189 pounds

And just like when these two met earlier in the year, a 1-0 win by Weatherspoon, it came down to one point.

"That was good, it was tough, but I got the W," Weatherspoon said. "My grind, my work ethic, being aggressive in the match, that helped me win today."

Not often do you see a freshman excel at a heavier weight class. Size, strength and experience, those usually come out on top when the larger wrestlers hit the mat.

That makes what Badge has done all year, and again Saturday, so special.

"I feel good," Badge said. "I got a good warmup with my warmup partner, and I wrestled well."

And what is nice for Badge, he gets to celebrate this week after his team fell short to Hudson in the Team Final a week ago.

"I thought we could have performed better a team states," Badge said. "But a lot of us redeemed ourselves here with 11 placing."

"I feel pretty good about this," Fox said. "I just felt comfortable with my moves. I just kept trying to score points and move the match."

PHOTO: Hudson’s Jordan Hamdan was selected as one of the flag-bearers for the Finals’ opening march Saturday at Ford Field, before going on to win his fourth MHSAA individual title. (Click for more from HighSchoolSportsScene.com.)