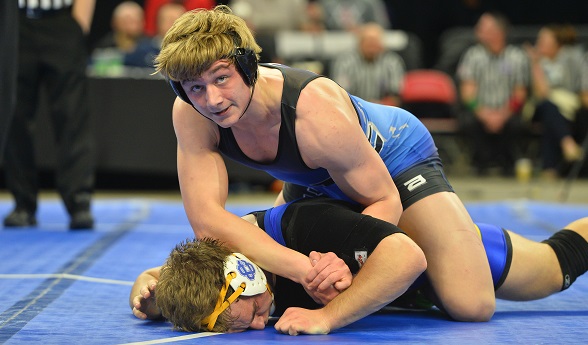 LINDEN — The books are never too far away from Trent Hillger, even as he works to put his name in the Lake Fenton wrestling record books.

On Monday night, as he does occasionally, Hillger rode for an hour across mid-Michigan to work out with partners who could challenge him.

As his mother drove him home, Hillger studied with the aid of a flashlight. At breakfast the next morning, he squeezed in some more study time. On the ride to school, he put the finishing touches on a paper.

That preceded another full day at school, followed by time in the weight room and wrestling practice.

It's the price of excellence for Hillger, on the mat and in the classroom.

"It's something a lot of kids don't have to experience," said Hillger's father, David, the athletic trainer at Lake Fenton. "Good or bad, it's just something he's had to learn to deal with. I'm proud of him, because that's a challenge every day. It's not like a lot of kids who just go home and study for two or three hours; he doesn't have that liberty."

Hillger, perfect on the mat the last two seasons, is nearly perfect in the classroom. The junior carries a 3.97 grade-point average, with an A-minus in an advanced-placement class standing between him and a 4.0.

"I really have to schedule my time every week, because I'm so busy," he said.

The 6-foot-1, 230-pounder was already a standout defensive end/outside linebacker for Lake Fenton when he filled a need at quarterback last fall. As one of the biggest quarterbacks in the state, he ran 141 times for 1,342 yards and 19 touchdowns in a run-oriented offense. He was an effective passer on those rare occasions when the Blue Devils threw the ball, going 25 for 39 for 503 yards and five touchdowns.

"It was definitely a wildcat type of offense," Hillger said. "I ran the ball probably 20 times a game."

He led Lake Fenton into the second round of the MHSAA Division 4 playoffs, where the Blue Devils lost to eventual runner-up Flint Powers Catholic. For his efforts, Hillger received special mention on The Associated Press' all-state team.

But it's as a wrestler that Hillger has made the biggest name for himself.

After placing fourth in the MHSAA Division 3 individual tournament and going 57-8 at 171 pounds as a freshman, Hillger joined his head coach as Lake Fenton's only sophomore champions when he won the 215-pound title to cap a 58-0 season.

Vance Corcoran was Lake Fenton's first MHSAA champion, in the 1985 Class C tournament, then won again as a senior in 1987.

"We've never had a three-timer, so he's got a chance to do that," Corcoran said. "We've had some really good kids come through the program; Trent's right there. Not only is he a great kid, but he's respected by all of his teammates. He's a 4.0 student, he's one of the best captains we've ever had and he's dependable."

Hillger is 39-0 in his quest to join the list of Lake Fenton's two-time champions. Of those victories, only three weren't pins or forfeits. He won one match by technical fall, one by a 6-1 decision over 2015 Division 1 qualifier Brandon Krol of Hartland ... and one in a match that exceeded the hype.

Hillger went four overtimes against Lapeer's Dan Perry on Dec. 19 in a battle between two MHSAA champions who are ranked among the top nine nationally. With an escape in the fourth overtime, Hillger escaped with a 4-3 victory in the Genesee County Wrestling Championships at Davison.

"It's exciting," Hillger said. "I like having close matches like that, but it's a little nerve-racking having an overtime match."

Hillger, who has won 97 straight high school matches, is ranked No. 6 nationally at heavyweight by InterMat and No. 8 by FloWrestling. Perry, who has signed with Michigan, is No. 4 in FloWrestling's rankings and No. 9 on InterMat. The two are expected to meet again on Saturday in the Lapeer Tournament.

"I look at them, yeah," Hillger said of the rankings. "It's cool. College is where it all matters. That's what I'm looking forward to if I choose wrestling." 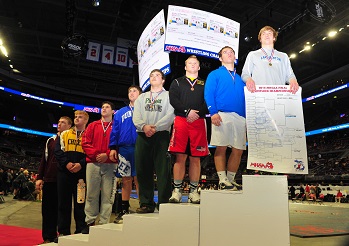 Hillger's combination of academic and athletic prowess has attracted the attention of Ivy League schools for football and wrestling. He's also been recruited by Iowa, Missouri, Wake Forest and Eastern Michigan for football. In wrestling, Indiana, Iowa State, Michigan and North Carolina State have expressed interest.

While choosing which school to attend, Hillger also has to decide which sport to continue at the next level. That decision may be more difficult.

"I have choices for both," said Hillger, who wants to get into sports nutrition or athletic training. "I'd say in wrestling I have a bit more, but they're the same level, the same caliber of teams. I couldn't decide. I've been doing both of them my whole life. It'll be a tough decision when I decide next year which sport I'll go into."

Hillger is a unique wrestling  athlete in that he's successfully made the jump from 171 pounds to heavyweight in two years' time. The skills that were necessities in the lower weight class serve Hillger well against the big boys in a division that maxes out at 285 pounds.

"During the summer, I knew I'd be at heavyweight, so I started wrestling up in weight classes," Hillger said. "I was wrestling really small. I'd wrestle 280-pound guys at 200 pounds, just to get used to it; it transferred over. Now I'm really comfortable at heavyweight. You've just got to use your speed and don't get stuck underneath a guy. Once you get stuck underneath, you're not getting up."

Hillger said he kept "my little-man mentality" when he moved up to heavyweight.

"I'm trying to stay fast, but I also got stronger in the other weight classes," he said. "That helped me to be faster than everyone else and still have the strength of the big guys. A lot of heavyweights wrestle up top. I like to stay low and take a bunch of shots, keep the pace going, make it a fast pace."

Like many wrestlers who enter elite high school programs, Hillger had a wealth of experience at a high level since he began competing at age 6. What set him apart was that he was having immediate success in one of the heavier weight classes.

"From day one, the kid's come in and he's mature and he's a hard worker," Corcoran said. "So, all the seniors took to him right away. They saw his work ethic. We get freshmen come in every now and then who come in like that, but not at the 171 weight class where he's wrestling men. Right away, he dominated. He's kept that same work ethic. I think it's even gotten better over the years, if that's possible."

Hillger is trying to not only repeat as an individual champion, but get Lake Fenton its first team title.

The Blue Devils are 27-3 and ranked No. 3 in Division 3 by MichiganGrappler.com. They are coming off a 42-22 victory on Wednesday over perennial power New Lothrop, the top-ranked team in Division 4.

"We should make the Finals," Hillger said. "Our team is very good, so the Finals is definitely a realistic goal. It will be tough to beat (top-ranked) Dundee; we'll have to have a few matches go our way."

Hillger has traveled across the country wrestling at a high level throughout his summers, but said the camaraderie of high school wrestling is hard to beat.

"It's an individual sport, but having your whole team cheering you on the side is nice," he said. "Seeing how far your team can go in team states is cool, seeing the whole team come together.

"When I wrestle by myself, I always have friends around at national tournaments, but it's not the same as having your team on the sidelines, getting excited for your matches."