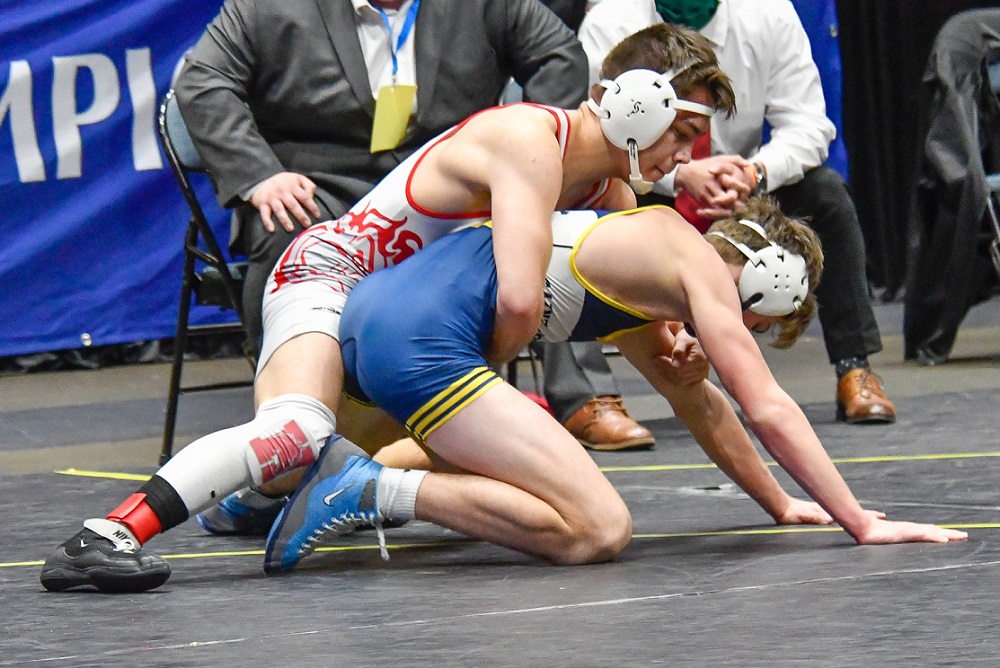 GRAND RAPIDS – Jacob Gonzales tasted defeat at the MHSAA Individual Wrestling Finals as a freshman, and he didn’t want to do that again.

So the Holly junior has decided not to lose. At all.

Gonzales claimed his second straight Division 2 championship Friday at Van Andel Arena, defeating St. Joseph’s Jacob Halsey 4-0 at 152 pounds. The win capped off a second-straight undefeated championship season for Gonzales (21-0), who is 76-0 over the past two.

“Just not holding back,” Gonzales said of the change in his mindset after his freshman year. “You let your nerves get to you, and you can’t wrestle the same. So, if you just let it go on the mat, you’ll have no regrets and you’re going to wrestle better. It helps just to stay focused and not let the nerves get to you.”

Gonzales was confident coming into the tournament, and, frankly, the season. He made the choice to wrestle at 152 pounds, as that’s where he wants to wrestle at Fargo Nationals, where he hopes to prove himself at “the next level.”

He still has a year to continue proving himself at the state level, even though he’s done plenty of that already, including in his win against Halsey (34-1), who entered the match unbeaten.

“You win it once, you’re like, ‘OK,’” Gonzales said. “But when you get it multiple times, it proves the hard work you put in year to year, that you’re getting better.”

Polk won the matchup between the two wrestlers on his feet to hand Richards his first loss of the season and claim a title in his first season.

“Defense and getting my positioning,” Polk said of the keys to the match. “I just wanted to score more and rack up more points.”

Polk wasn’t looking to the future and his possibilities, but the first title was something he said he envisioned.

“I worked hard this summer for it,” he said. “I just deserved it.” 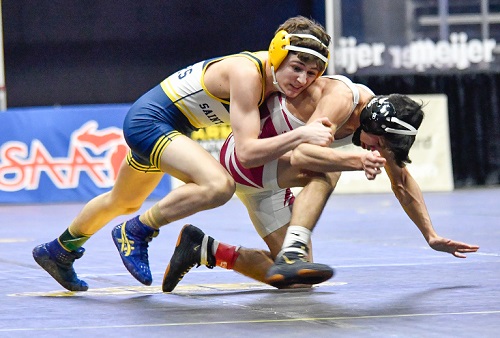 Wertanen exploded for a pair of takedowns in the opening period to take control in what was to became his second-straight Finals championship victory.

“Going into the tournament, I knew my toughest two matches would be probably my semis and the finals,” Wertanen said. “I think what did it for me is that I went out in my semis match and won 10-0, a dominant win, so having that, knowing against that caliber, I was there.”

Finishing the season unbeaten was a major motivation for Wertanen.

Parker became the second champion all-time for Spring Lake, and first in 53 years.

“It’s pretty surreal,” he said. “I’ve never felt anything like this before. It’s the happiest day of my life.”

Parker took control of the match with a pair of first-period takedowns, and put it away in the third with a two-point nearfall.

“I kind of have the same strategy every match,” he said. “Work to my ties, make it my match, don’t react, make them react to what I’m doing.”

Haynes closed out his illustrious career with a fourth-straight top-three finish, and second-straight individual title.

“It was a little more exciting – a closer match, definitely,” Haynes said of the difference between his second and first titles. “This is how it is, I guess.”

The score was tied at 1 late, and Lucio nearly made a big move, but Haynes countered it for a throw of his own to put the match away in its final seconds. 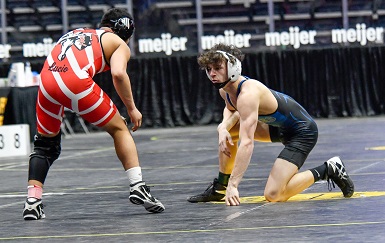 Wilson made it two titles in a matter of minutes for Tower, as he closed out his first Finals championship shortly after Haynes had captured his.

Wilson held a 4-2 lead late, before he went crashing into the scorer’s table. He shook it off to get a takedown and wrap up the title.

“My calf hit the table pretty hard, but after like a couple seconds I didn’t really feel it because there was so much adrenaline going through my body,” he said. “It was just an amazing match. Good job on him, too. I’m so happy with myself right now. I put in so much work to get here.”

In a rematch of the Regional Final, which Strejc won, the Lowell senior had to hold on late to pick up his first individual Finals title. Peterman scored a late takedown to pull within two, but Strejc didn’t allow any other points.

“I had a little bit better of a gameplan this time with him,” Strejc said. “I knew he was a really good mat wrestler. I knew he was going to be going for Granbys and the Pearsons there, so I just had to stay mentally tough.”

After winning a team title on Tuesday, and four more matches Friday, Strejc’s immediate reaction following the match wasn’t to take a break.

“I’m just ready to keep going,” he said. “What’s the next thing to do. I love the sport. I’ve been doing it since I was a little guy.”

Hinson learned to appreciate the grind of wrestling this season, and when his final match ended with him claiming his first individual Finals title, he was able to celebrate the fruits of his labor.

“It’s all worth it,” he said. “I’ve struggled with wanting to go to practice in the past because it’s a grind, and some days you just don’t want to do it. So, when the final seconds ticked off the clock, it was just the greatest feeling.”

All the match’s scoring took place in the second period, as Hinson scored a pair of takedowns. He held Hettrick off in the final seconds to secure the victory.

“I wanted to make sure my position was in check,” Hinson said. “And it was really just rolling through my head that now I’m a state champ.”

Hoover didn’t even wait for the post-match handshake before sprinting to his coaches to celebrate his first individual Finals title.

“I just thought about all that hard work that not only I put in, but my teammates and my coaches to get to this point,” Hoover said. “I just can’t thank them enough.”

He also didn’t waste much time, as he was able to get the match’s first takedown in the opening minute.

“I’ve always tried to be the aggressor and try to push the pace and get to my shots,” he said. “That’s ultimately what happened in that match.”

Dean and Crace won a Finals title together earlier in the week, as they led Lowell to its eighth straight Division 2 team championship. But when they met on the mat in the Individual Finals, they decided to go at it.

“We talked before, and we just said we’re going to scrap it out,” Dean said. “I didn’t expect him to hold back; he’s been working real hard all year just like me. We’re teammates at the end of the day, and when we came off the mat, we’re still really good buddies. On the mat, we were just wrestling like we normally do.”

Dean won the match on his feet, getting a takedown in all three periods, and didn’t give up a point until a late escape for Crace in the third period.

“It’s special,” he said. “I think it represents more than just me being the best person on a bracket today and this year. It’s a testament to this team, the culture here, the community here, the support from our administration at the school. Everybody was in on this, it wasn’t just me out here today.”

Lee scored a takedown in the final 30 seconds to put away a tight match.

“I knew he was going to come after me, and then I got a stalling call on the edge which is when I kind of flipped the switch,” Lee said. “I was like, ‘I’m going to go get this kid,’ because he wouldn’t be expecting that. I’m up by one point, so if I get a takedown, that seals the match.”

The win capped off a hectic, but bountiful week for Lee and his Lowell teammates.

“It’s amazing,” he said. “I definitely take pride in the team state title more. That takes a lot of guys making a lot of sacrifices.”

Brenner dropped a match to Scaramuzzino earlier in the season, and he wasn’t about to let that happen again. He took a 3-0 lead in the second period and rode Scaramuzzino out in the third period to claim his title.

“I wrestled him earlier in the season and I started to slack off later in the periods, and that’s how he was able to score his points,” Brenner said. “This match I was just working and working every single time, every minute of the period, every second of the match. I was just going after him.”

The advantage in the top position came from years of work, and studying.

Crum took a shot to the forehead late in the matchup of unbeatens but was able to hold Norscia off in the final seconds to secure the victory.

“It was really funny, all week we were working on if someone gets in on your legs, kick, kick, kick,” Crum said. “That’s really what happened at the end. I really got control with my inside ties and I just tried to own him.”

Crum scored a takedown in the first period and maintained his advantage through the match.

“It’s something I’ve been working for so hard for four years,” Crum said. “When you put so much time in on the practice mat and it finally comes through, it’s amazing.”

Nugent found himself trailing after a Culver takedown in the first 20 seconds, but he fought back and dominated the rest of the match to claim his first individual title.

“Pure joy,” Nugent said. “Pure joy having my whole community behind me. My brother and everyone just here to support me and help me grow as a person.”

“It’s way cooler to do it with teammates,” he said. “I couldn’t imagine being here by myself.”