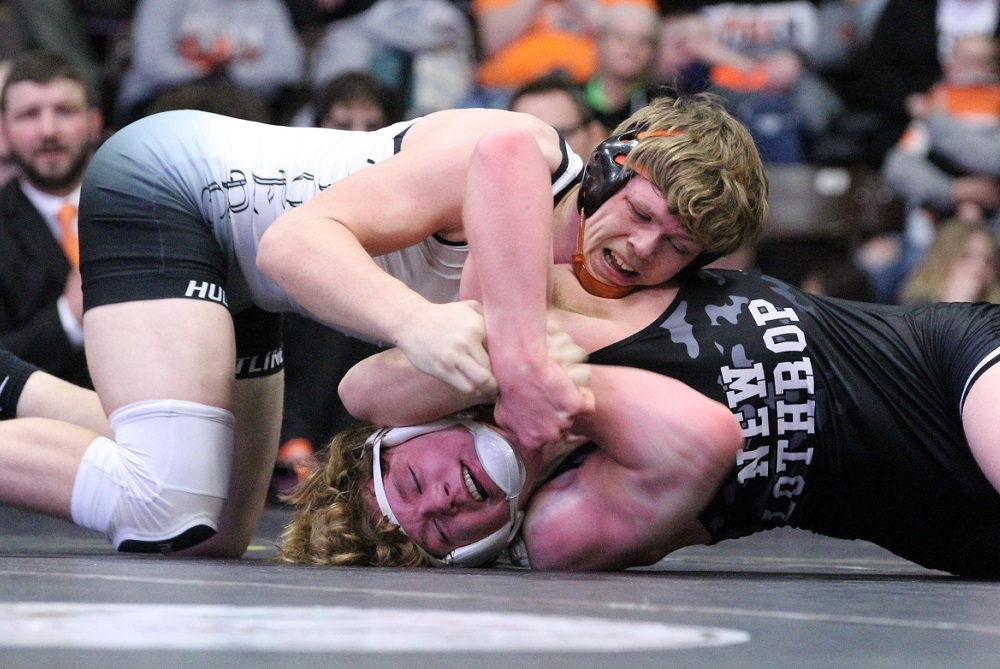 KALAMAZOO – The Hudson wrestling team is not used to not wrestling on the state’s biggest stage.

The Tigers, who made 12 straight MHSAA Division 4 Team Finals from 2009 through 2020, winning eight times along the way, did not advance to the championship match a year ago and had last won one in 2019.

But in dominating fashion, Hudson climbed back atop the Division 4 throne Saturday night at Wings Event Center with a 47-13 title match win over familiar championship rival New Lothrop.

The Tigers earned their trip back to the Final with impressive wins over LeRoy Pine River in the Quarterfinals and St. Louis in the Semifinals.

"These boys have been through some real trials, not just the wrestling season, but life in general," Hudson coach Scott Marry said. "And not just these kids, but all kids."

Things began to look up for Hudson in the fall, and have continued through the winter.

"We just won a football state championship, and most of them were on this wrestling team that just won this," Marry said. "They are just so excited about the competition, and it's almost like they are reborn."

Reborn and driven, as the Tigers won the first two matches of the Final with Logan Sallows and Cameron Kimble decisions at 189 and 215 pounds, respectively.

But the Hornets, who are no strangers to wresting for state titles, showed some resolve in the next three matches as Isiah Pasik won by fall at 285 pounds, Blake Wendling won by major decision at 103 pounds and Daven Lockwood won by decision at 112.

From there it was all Hudson, which won the dual's final nine matches.

"Last year was the biggest struggle with COVID," said senior 152-pouinder Bronson Marry, a winner in his match by fall. "Two years ago wrestling had just got done before COVID hit, and last year we went through all the precautions with the masks and everything, and we weren't even sure we were going to be able to wrestle, let along compete for a state title. This year was just amazing. I have been waiting for this feeling for a long time."

"You just get so accustomed with Hudson winning state titles, it didn't kind of register," said Campbell, whose team ended its year with a 23-3 record. "I am happy for their community, and I am happy for them. I have a lot of respect for everything that they do. Coach Marry and their whole staff – my son is a youth wrestler, so I see what they are doing at a lot of youth meets. They put the work in."

And now the Tigers are back on top.

"We are all blessed," said Scott Marry, whose team ended with a 22-4 record. "In Hudson we believe in Hudson-trained. We believe in three-sport athletes, and these kids bought into that."