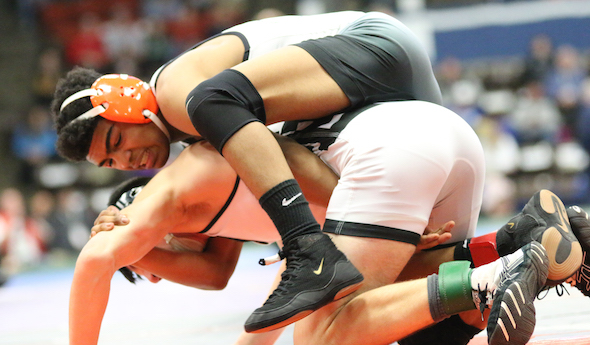 The Hudson wrestling team found that out this year.

The reigning Division 4 champion had to deal with a few no-shows, as well as some tough injuries. But in the end, the Tigers were able to overcome and win their seventh MHSAA title by beating old foe New Lothrop 34-22 in the championship match Saturday evening at the Wings Event Center.

"We had some things go against us this year," said coach Scott Marry, whose team completed its season with a 20-5 record. "We lost some kids because their heart wasn't in it, and they backed out. There were three or four that did that. And of course we lost (starting heavyweight Isiah) Kizek at the start of the season with mono, and then he had an AC separation in his shoulder. Then last Saturday is his first match, he dislocates his elbow, so we wrestled our backup here all day – kid we taught how to wrestle three months ago."

It worked, even in a loss.

But the Tigers seemed to thrive on the emotion of the hard work Price put in, as they won eight of the 14 matches wrestled. More importantly, three of those wins were by pin, and one was by major decision.

And when two evenly matched teams face off, bonus points are very important. 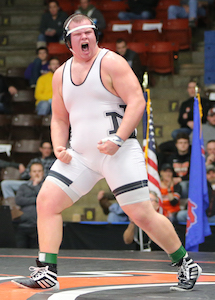 One of those pins came from undefeated reigning individual champion Jordan Hamdan in the 140-pound match.

"This is a crazy feeling; it's always good to see all of our hard work pay off," Hamdan said. "We have always practiced for this, and we always will. We had a lot of struggles this year, and all the hard practices. It is such a good feeling to win."

But like they have all weekend, the Hornets showed heart in the Final.

"We are back to chasing these guys again," said New Lothrop coach Jeff Campbell, whose team won three straight Division 4 titles before finishing runner-up to Hudson the last two seasons. "They are ahead of us, and we have a lot of work to do. There was a lot of parity in Division 4 this year, so it didn't matter when the seeds came out. We could wrestle this tournament again, and we could have two different teams wrestle here."

Perhaps. But Hudson and New Lothrop have now met five straight times in the championship match.

"Jeff Campbell and his team have done this two years in a row," Marry said. They seeded them sixth, and they come through that bottom bracket. They fight hard, they are a lot like our kids and we have the utmost respect for New Lothrop. I take my hat off to them."

New Lothrop ended its year with a 25-4 record.

Click for full results of the weekend’s Division 4 matches.