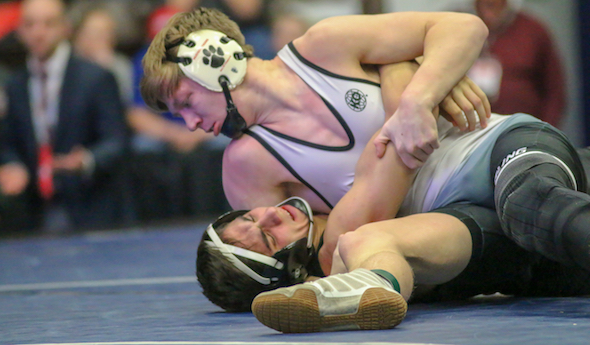 KALAMAZOO – When Scott Marry took over the wrestling duties at Hudson High School 31 years ago, he knew he had to build a foundation to make his program a success.

He had to get his Tigers young and prepare them for the demands of wrestling, knowing that someday they would perform on the state's largest stage.

So when he was handed his team’s eighth – and third straight – Division 4 championship trophy Saturday after Hudson beat Clinton 45-19 in the Final at Wings Event Center, he made sure one of the championship photos had two rows of young Tigers in it, with smiles wide and raising their index finger high in the air claiming victory.

"There is definitely a climate going on right now, from the youth program all the way up through Hudson," said Marry, whose team ended the year with a 20-7 record. "We don't worry about how many kids we have; the kids work hard. You get them, then season them, get them tough and callus them. A meet like today’s is no different than our practice room. Our room is really tough."

Carson Price was one of those young Tigers who felt the excitement when Hudson was winning five straight titles from 2008-13.

He wanted to be part of the winning, and played a big part in the victory over Clinton when he earned a pin in 3 minutes, 23 seconds at 171 pounds.

That was one of six pins Hudson had over the Redskins.

"We peak at the right time," Price said. "Our guys love each other, and this is a tradition. I have been wrestling since I was a 4-year-old little kid and dreaming about this stuff since I was 6. Today we had all those little kids sitting up there, dreaming with us, and now they are the next wave." 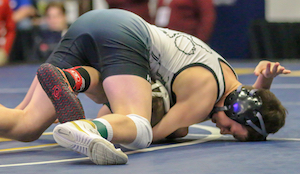 All the seasoning does pay off at the most important times for Hudson.

Of the six pins, four came in a row between 215 pounds and 112. During that stretch, Kyle Moll, Isiah Krizek, Payton Rogers and Bronson Marry all secured falls that turned a 14-9 Clinton lead into a 33-14 advantage for the Tigers.

From there, who was going to win the title was a formality.

“The coin flip was big, and that is a great team," said Clinton coach Jeff Rolland, whose team ended its year with a 30-5 record. "When they get going, they get going, and that (the four pins in a row by Hudson) was a tough stretch for us. We got wins at 140, 145, 160 and 189 and it was close and we felt good. I don't feel like we underperformed today. We got beat."

That's when the Tigers flexed their muscles and showed the Wings Event Center crowd how well they can pin from the cradle.

"We didn't know we were going to get pins, but we knew those rubber matches would be in those places," Marry said. "So we knew there would be a shift in the scoring. This is not like football; you can't get caught up in a 14-point deficit, knowing that you have four weight classes in a row where you can score 24 points."

And that is what Hudson did to show everyone it remains the team to beat in Division 4, even though the Tigers came into the weekend as the third seed. Clinton was seeded number one.

"Everyone keeps asking about the seeds," Rolland said. "Until someone beats them, they are the one everyone is chasing."

PHOTOS: (Top) Hudson's Carson Price works toward a win at 171 pounds during the Division 4 championship match. (Middle) Another Tigers wrestler controls his opponent Saturday. (Click for more from HighSchoolSportsScene.com.)