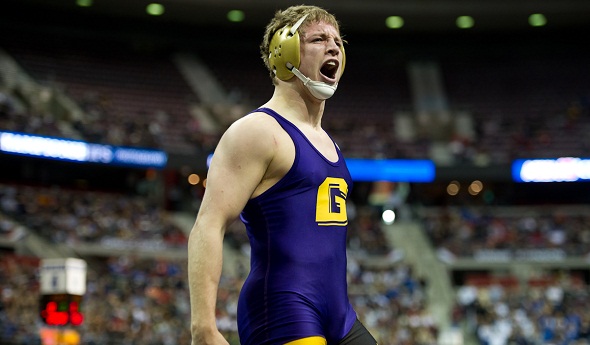 AUBURN HILLS – A total of 56 individual wrestling champions were crowned Saturday at The Palace of Auburn Hills.

One was St. Johns senior Taylor Massa – and he earned his own story after finishing his career without a loss.

But there were plenty of others to tell. Following is one for each of the 13 other weight classes, starting with 189 pounds – the opening weight at this season’s Individual Finals – plus a mention of all 56 champions. Click for full results.

Among the many Jordan Thomas thanked after winning his third MHSAA title was the one opponent who beat him at the Palace during the last four seasons.

Thomas and St. Johns’ Massa led the opening march Saturday, around the mats where Massa dealt Thomas that loss, in the 145-pound Division 2 Final when both were freshmen.

From that day on, Thomas lost only once more. And he capped his championship career by knocking off the reigning Division 2 champ at his weight. In one of the first matches of the day – and arguably the best – Thomas edged Lowell senior Gabe Dean 5-1.

“This being my last match ever, there’s no redemption after this, so I knew I had to get this win,” said Thomas, who will wrestle next season at the University of Michigan.

He finished 45-0 this season and 217-3 for his career despite taking off a month this season after tearing a knee ligament. That continued to slow him Saturday, but he had been building for a strong finish since the day he fell to Massa 5-2 – a match he said paid off through the rest of his Greenville career.

“At high school it’s not about the win and loss, it’s about getting better,” Thomas said. “And I feel like that improved me as a person and a wrestler so much. I don’t regret it a bit.”

But the Oxford senior finished in the best possible way – with his second straight MHSAA individual championship. Line defeated Wayne Memorial’s Dimitrus Renfroe 5-1 in the Division 1 Final after also winning at that weight in 2011.

“Wrestling made me a better person. … (It develops) mental toughness, and it works on your one-on-one competition a lot,” Line said. “It’s a great sport.”

Line finished 49-0 this season and 184-23 over his four-year high school career.

Fowlerville junior Adam Coon showed the result of moving up to 285 pounds this season after winning two MHSAA titles at 215. His Division 2 championship match ended with his tongue and lips spotted with blood.

But the result that mattered most remained the same – Coon won his third championship, 7-4 over Mason senior Adam Robinson, and will go into next season hoping to become the 17th wrestler in MHSAA history to win four Finals titles.

Coon faced Robinson four times this season on the way to finishing 50-0.

“Of course, at the state finals it’s going to be a little aggressive. So maybe there were head butts in there for both sides,” Coon said. “But you know what? That’s what wrestling is. It’s aggressive. … You’ve got to be able to take those.”

Carson City-Crystal junior Kenneth Dittenber is getting used to finishing his season with a win. He’s ended the last two with an MHSAA Division 4 title at 103 pounds.

But Saturday’s clincher had a different spin. In 2011, Dittenber won his Final 5-4. This time, he pinned Shelby junior Austin Felt 56 seconds into the second period. It was a much better reward for a season filled with higher expectations.

“I just practiced a lot harder. I knew I was going to have a target on my back as a state champ last year,” Dittenber said. “I just wanted to wrestle everybody like I should."

Temperance Bedford junior Mitch Rogaliner had one opponent on his most wanted list this weekend. And he got his wish, drawing Holt’s Shayne Wireman in a Division 1 Semifinal.

Wireman had beaten Rogaliner 2-1 in last season’s 103-pound Final. But Rogaliner got him back Friday with a third-period pin before earning a 9-5 decision over Canton sophomore Ben Griffin in Saturday’s Final.

Rogaliner said he knew if he could beat Wireman, the championship should be his as well – and he used lessons learned last season to finish the run.

“You can’t let the nerves get to you. You can’t just go out there scared,” Rogaliner said. “You just have to lay it all out on the mat, and hope that your all can win it for you.”

Grand Rapids Forest Hills Eastern senior Tim Lambert had picked up a reputation as the best wrestler in Michigan never to win an MHSAA title.

He doesn’t have to hear that one anymore.

Lambert – who crushed the 200-career win milestone earlier this season – finished with one more, getting a takedown just before the buzzer to beat St. Johns freshman Logan Massa 5-3 in overtime. The Division 2 championship is the first for a Forest Hills Eastern wrestler, and capped a 58-0 finish for Lambert this season.

“There was definitely a lot of pressure. But I just came out to win, whether it was by two points or 10,” he said. “Logan’s a very tough wrestler. He’s going to have a great career. I knew it was going to be a grind until the end, no matter what. And that’s what it was.”

But that overconfidence dissolved with two losses and a fourth-place finish in Comstock Park’s first tournament – and was replaced by more intense practice and extra workouts.

“It was a great wake up call. I wanted to real quick,” Ross said of rebounding from the early losses.

“The second (MHSAA title) is definitely tougher. You’ve got a big old ‘X’ on your head. Everyone is after you.”

Last season he earned the title at 125 in part by surviving two one-point decisions. But this time, he advanced with two technical falls and a pin before downing Oxford sophomore Mike Willits 6-1 in the Final.

“I said it earlier in the tournament: It’s all confidence and not cockiness. And you just need to work as hard as you possibly can,” said Bade, who finished 50-1. “This week was the hardest I’ve ever worked in my life.

“There was only one goal in mind and that was a state championship, and I got it done.”

But Schaub also already had one MHSAA championship. He added a second with an 11-4 decision capped by a final three points just before the third-round buzzer.

He finished his first season back in Michigan by beating the same opponent he faced in the team Final – Lowell senior and reigning individual champion Gabe Morse.

Whitford handed Morse just his second loss of this season, 11-4. A week ago, Whitford beat Morse 11-9.

“In the first match, I kept getting out of position. That’s how he was able to score,” Whitford said. “This time, (I stayed) in a good position, had to stay on his head, get him tired, keep working him.”

“If I don’t know (what an opponent) is going to do, I can wrestle my own style instead of changing my style to fit his style,” Flowers said. “(But) it also helped too.”

Saturday’s Division 1 152-pound Final was one of the most anticipated of the entire Individual Wrestling Finals. And not because Brighton junior Aaron Calderon was on the card.

Detroit Catholic Central senior Alec Mooradian was seeking to become only the 16th wrestler in MHSAA history to win four individual championships. Instead, Calderon won his first – and became part of history for what he didn’t allow to happen.

Mooradian scored first before Calderon hung on and spun out of a late potential takedown to win 3-2.

The only disappointment on Hudson senior Devan Marry’s MHSAA championship resume came last season, when he lost in the 160-pound Final after previously winning titles at 152 and 135.

On Saturday, he made sure to pick that one up too.

Marry also has been a big part of four MHSAA team championships. So make that seven total for the future Eastern Michigan wrestler, who claimed his last with a 10-4 decision over Sand Creek senior Sam Mehan – who beat Marry 7-5 in last season’s 160 Final.

“It’s that much more special to go out on a last hurrah,” Marry said. “I’m just happy to have such good classmates and all the classes below me coming together. Not only did it show last weekend, but it showed here how hard we work and how it finally pays off at the end.”

Click for a separate piece on St. Johns’ Taylor Massa and his perfect high school career.

PHOTO of Greenville's Jordan Thomas. See more photos from the Finals and all season at High School Sports Scene.