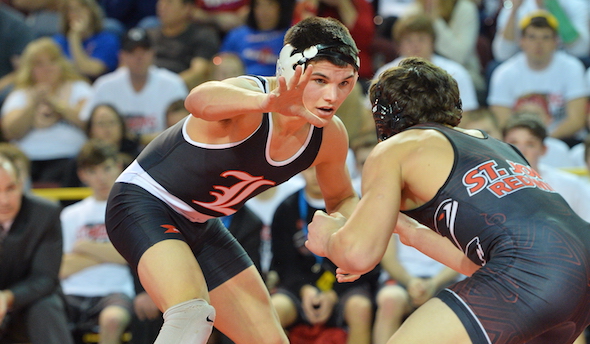 MOUNT PLEASANT – Lowell needed 13 matches Saturday to clinch another of what has become an annual MHSAA Finals back-and-forth with rival St. Johns.

But senior Lucas Hall, in his final high school team match, needed only 26 seconds to put the finishing pin on his team’s third straight Division 2 championship.

Lowell added a sixth MHSAA title to a body of work already ranking it among the most successful wrestling programs in state history, outlasting the Redwings 37-22 despite the teams being deadlocked with three matches remaining.

Hall’s pin at 125 pounds was sandwiched between a pin by junior Sam Russell at 119 and a decision by freshman Avry Mutschler at 130 that together gave the top-ranked Red Arrows the final 15 points of the day – literally – as the back-and-forth nature of the tussle caused it to finish last of the four Finals and multiple matches after two had concluded.

“It’s really been us multiple years going back and forth at it. It’s tough. It’s not going to be easy; everyone knows that,” Hall said. “We’ve had good times, we’ve had bad times with St. Johns. To be honest, it’s just going after it, trying to go for the win. Rivalry wins are the best wins.”

Lowell finished 22-3 and entered the weekend the top seed to go with its top regular-season ranking. St. Johns (28-5) was ranked third heading into the postseason but seeded second this weekend.

The Redwings opened a 7-0 lead after two matches, and the Red Arrows tied the score with two straight wins. St. Johns then earned a decision, and Lowell tied it again with a decision – but in doing so started a 15-0 run keyed by some deft maneuvering at the heavier weights by coach R.J. Boudro.

Junior Eli Boulton has wrestled at 215 pounds but got in at the 189-pound match and came away with a pin. After a decision win by senior Logan Blough at 215, senior Max Dean moved up two weights to 285 – giving up about 100 pounds but beating 5-4 St. Johns senior Jake Gnegy, a likely contender at next weekend’s Individual Finals.

Dean wrestled heavyweight for the first time this season in Friday’s Quarterfinal win over Sturgis.

“I like challenges. Coach came to me with the idea and I was all about it, and I was just really excited and glad I could get it done for my teammates,” Dean said. “Credit (Gnegy), he was really strong. I knew I had to wrestle the match a certain way and didn’t want to be under him or anything like that. I thought it would be a lot of fun.”

St. Johns battled back with back-to-back pins by sophomore Brendan Zelenka and junior Emilio Sanchez at 103 and 112, respectively, to tie the score again – setting up the closing run by Russell, Hall and Mutschler.

All five of Lowell's seniors won their matches in the Final as the Red Arrows won nine of 14 matches total.

“Everybody just expects us to do this. What no one knows is how hard these kids work and how hard it is to win a state title with the expectations that we have,” Boudro said. “Our seniors, every senior did what they were expected to do. It was just an awesome win. We wrestled above expectations, I felt like.”

The same could’ve been said for the Redwings, perhaps, for a couple of reasons. St. Johns missed Finals weekend completely last season, losing to eventual Division 2 runner-up Eaton Rapids in the Regional Final.

The Redwings had to beat both No. 7 Eaton Rapids and No. 2 DeWitt to reach CMU this weekend – and nearly had enough to finish with a fifth championship in seven seasons.

“One thing that this team has not done all year, is we haven’t given up. Things may not go our way, but it doesn’t discourage us. We keep battling hard, we keep wrestling tough,” St. Johns coach Derek Phillips said. “The way last season ended left a sour taste, so we all wanted to wrestle tough and get back here. But we didn’t talk about it much this year. This year we just focused on getting better and having fun. … We didn’t win, but I thought we had a successful season where the guys got better, had fun, and the team, we grew.”

Lowell cruised to a 52-18 win over Sturgis in its Quarterfinal on Friday, while St. Johns advanced with a 49-23 win over Dearborn Heights Annapolis. The Redwings then beat third-seeded Gaylord in a Semifinal, 55-11, while Lowell outlasted fourth-seeded Goodrich 35-27.

Hall, Max Dean, Mutschler, junior Bryce Dempsey and senior Danny Kruse all won all three of their matches on the weekend for Lowell. Zelenka, junior Bret Fedewa and senior Ian Parker won all three of their matches for the Redwings – Parker winning the most intriguing individual matchup of the Final, 3-0 over Lowell senior Zeth Dean. Both are reigning individual champions and will be in the 140 bracket next weekend.

PHOTO: Lowell and St. Johns met in the Division 2 Final for the fourth time in five seasons Saturday. (Click to see more at HighSchoolSportsScene.com.)