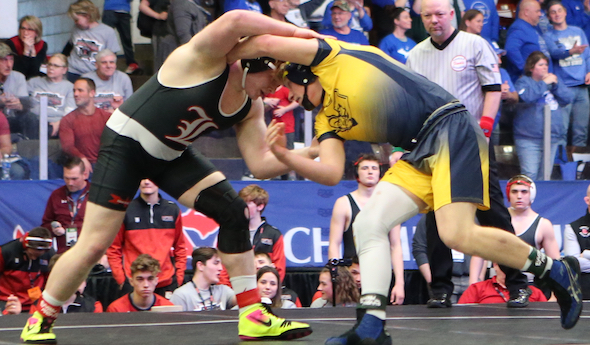 KALAMAZOO – When talking about a dynasty, Lowell wrestling coach R.J. Boudro says the cause and effect of his program’s reaches far outside of his wrestling room.

Boudro and Red Arrows added to their dynasty Saturday at the Wings Event Center when they won their seventh straight – and 10th overall – Division 2 team championship with a convincing 53-4 victory over previously-unbeaten Gaylord.

The win extended the team’s MHSAA record for consecutive Team Finals championships, which Lowell took over alone with their sixth in a row in 2019.

It didn't take long for Lowell to muscle control away from the Blue Devils on Saturday.

From there, Lowell won 13 of 14 matches, and there was never a doubt which team would finish on top

During that stretch, there were some very big individual matchups – like the one at 145 pounds. 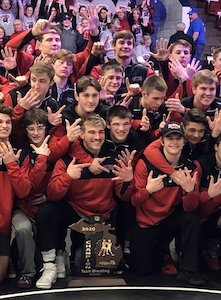 Boone reiterated his coach's sentiments on what it means to be a Lowell Red Arrow, and that he is a product of great people around him.

"We picked up where our old teammates left off, and we all get to carry on what they started," Boone said. "It is nice to see our seniors finish this off, and now it just moves on to the next guys.

Boone could write his name in the state's wrestling history book again next weekend at Ford Field as he will try to become just the second wrestler in the state to win four individual and four team titles.

If accomplished, he will join former Davison legend Brent Metcalf in earning that achievement.

"Lowell has given me so much." said Boone, who will be wrestling at Penn State University next year. "I have had (practice ) partners for so many years that have made me better than I ever thought I could be. I wouldn't be as good as I am today without them."

This was the second time in the past three years that the Blue Devils lost to Lowell in the Final.

"They are good, they are a well-coached team," Gaylord coach Jerry LaJoie said. "We had a couple of things that did not go right for us, so we had to adjust our lineup. So that forced our kids to wrestle up a weight or two."

PHOTOS: (Top) Lowell and Gaylord wrestlers work for control at the start of a match during Saturday’s Division 2 Final. (Middle) The Red Arrows celebrate their seventh-straight Division 2 championship. (Click for more from HighSchoolSportsScene.com.)