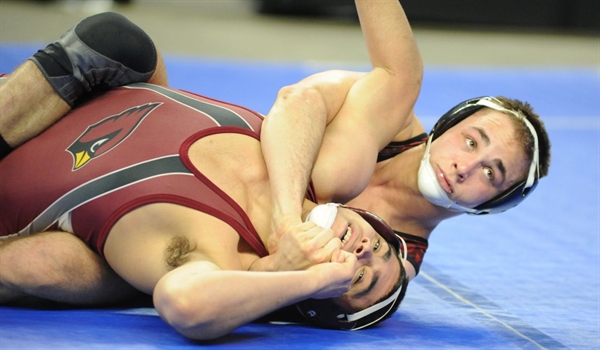 AUBURN HILLS – Logan Massa threw three fingers in the air, and then did a backflip to near perfection on the floor of The Palace of Auburn Hills.

The three fingers were a symbol of the third championship he just won at the MHSAA Individual Wrestling Finals on Saturday.

The flip was to show the crowd just how athletic this University of Michigan-bound wrestler is, and why he is considered by many as the best wrestler in the state at any weight in any division.

Massa pinned Manuel Roldan of Melvindale in four minutes, 41 seconds in their 171-pound championship match in Division 2. That now makes seven MHSAA Finals titles in the Massa family, as older brother Taylor Massa was a four-time champion and now wrestles at Michigan.

Logan said Taylor played a big part in his success.

“It is awesome to have a big brother like Taylor,” Massa said. “He is the best to have. He was a four-time undefeated state champ, and he knows what it’s like to be here. Whenever I was down on myself in the practice room, he would always help me get through it.”

What also helped Logan Massa get through the past three title runs was a tough loss in the Finals to Ada Forest Hills Eastern’s Tim Lambert when Massa was a freshman.

“I came here my freshman year and fell a little short, so I had to pick it up in the practice room,” Massa said. “That helped me get three more. (Lambert) was the best wrestler you could wrestle in the state that year, and I was only a freshman, so that could only help me get better.”

Mahlich jumped into his coach’s arms, then sprinted to the stands after winning the 103-pound title with a tight 4-3 win.

Mahlich wanted to pay respect to his father, Greg Mahlich, who has played a big part in his career to this point.

“He knew whatever happened, he would be happy with me because I was in a state championship match,” Mahlich said. “All throughout MYWAY (Michigan's Youth Wrestling Association), it's been a goal to see me win it here, so he was extremely happy.”

And Mahlich's growth not only happened with his wrestling, but also his stature.

“Last year I was a small 103-pounder, and I ended up taking eighth,” Mahlich said. “Last year I Alpha (weighed in) at 96 pounds, so I was pretty small.”

LaJoie knew his opponent in their 112-pound final – highly-touted freshman Franco, who came into the Finals with a perfect 49-0 record.

But LaJoie had something Franco wanted, an MHSAA title won last year at 103 pounds. And that experience helped him beat the talented freshman 14-10 in the title match at 112.

“I knew I had more experience, and he's a freshman now knowing what to expect,” Lajoie said. “I just took it to him.

“Winning this second one was definitely harder, because there is more pressure on you. But you have to overcome that.”

Lowell junior Lucas Hall was another wrestler with a bull's eye on his back, after winning a title at 112 pounds last year.

But Hall didn't let that get in the way.

“Last year's (championship) panned out with a pin,” Hall said. “I went into this match giving him a lot of credit. I just wrestled my match. I don't try and think about (being a returning champion), I just try and keep a clear mind and wrestle. I wrestle each match as its own, and move on to the next one.”

Parker knows how to work hard. He also knows what winning is about.

As a wrestler for St. Johns, Parker has seen many teammates win MHSAA Finals titles, and has been on teams that have won as well.

Now he has an individual championship of his own, beating Byron Center's Jacob Busing 7-1 in the 125-pound title match.

“This feels amazing, there is nothing like it,” Parker said. “It feels great because you work so hard, and when it all comes through, it feels great.

“Working with guys on my team, learning what they know and working hard with them, that helped me today. Many have experienced this, and know what to do, and that helped me.”

Zeth Dean watched his cousins Gabe and Max Dean win MHSAA championships for Lowell, and now adds his own to the Dean family legacy.

“This is exciting,” Zeth Dean said. “Being at a place like Lowell, you are born and raised watching kids win state titles, and that's all you want to do. That's your only goal. That's why you go to practice when you are in second and third grade, is to win a state championship.”

Dean came close as a freshman, taking second at 112. Last year he wrestled with an injured knee and took fifth.

Sklapsky knows how it is to be close to a title but to just miss out.

Last year he was a runner-up at the Individual Finals, and last week his Eaton Rapids teammates took second to Lowell in the Division 2 Team Final.

He finally has a championship.

Sklapsky had to be a little worried, as Veydt came into their match off of one of the biggest upsets in the tournament, beating Clio's Mason Smith, a two-time reigning champ, in the Quarterfinals on Friday.

“I had confidence I could beat everybody,” Sklapsky said.

It was a battle of returning champions at 140 pounds. Thompson was superior technically on this day, beating Melton 7-5 in a hard-fought contest.

After watching his younger brother lose in the Finals earlier Saturday evening, Chris Schoenherr went out and won the family a championship.

“We knew my brother was going in wrestling a really tough kid, and I know Noah always does his best,” Chris Schoenherr said. “But I knew I couldn't dwell too much on his match. As soon as I was done watching his match, I made sure I was ready mentally for mine.”

At the start of the year, Myers wasn't in wrestling shape.

That's because he got a late start to his season after suffering a broken right hand during football in the fall.

But Myers got in wrestling shape during the dog days of the wrestling season in January and capped of his senior campaign with an undefeated record and MHSAA title.

“It was hard coming back into the season. I was out of shape,” Myers said. “I started out at 160, but those guys were just too big, then I finally made 152 and got in shape to do this.”

In his four matches at The Palace this weekend, he won two by major decision and two by technical fall.

Wildmo had the clock and a bad right ankle working against him in his 189-championship match.

But he dug down deep enough to beat Gregory with an escape with one second left.

“That's exactly what I was thinking heading into this match; wrestle six minutes,” Wildmo said. “I heard my ankle pop with about 30 seconds left, but I kept wrestling and working. Three two-minute goes.”

Colegrove was just as impressive winning his second title as he was winning his first last year.

And the Lowell senior also was just as humble and grateful.

“This feels great, to come back my senior year and win,” Colegrove said. “Being at Lowell has been really good to me. If I wasn't at Lowell I wouldn't have all the great workout partners I do that helped me get here. This has been a really great place for me, and I love it.”

Last year Dallas Recker fell just minutes short of qualifying for the Finals, losing in the 'Blood Round' at Regionals.

He made the most of his first trip to The Palace this year, pinning his way to a title.

“This feels pretty good,” Recker said. “I never expected to pin my way through the tournament. But I am quite happy that I did.”

PHOTO: St. Johns’ Logan Massa works toward a pin in his Division 2 championship match at 171 pounds. (Click to see more at HighSchoolSportsScene.com.)