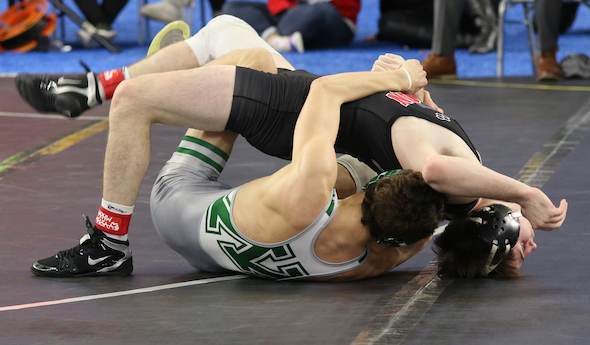 The senior from Mendon became just the 28th wrestler in MHSAA history — and second on the day — to earn a fourth Individual Finals title.

Crespo finished with a 53-1 record as a senior and more than 200 career wins. His only defeat this season came against an out-of-state opponent.

“This feels better than you can imagine,” smiled Crespo.

“One day in seventh grade my coach texted me and asked me, ‘What are your goals?’ I told him I wanted to go D-I,” added Crespo. “He said ‘that we have to have some other goals, too. He said why not go for it all?’ That’s what I did each year.”

McCombs finished his sophomore campaign with a 37-10 record and was part of Clinton’s team championship run. He also lost in the 2019 quarterfinals to Crespo, and wound up finishing fifth.

“I knew he was good on top, but I knew I could take him. I knew I was better. I don’t want to sound cocky, but I have confidence in myself and my training,” added Crespo. “There was no way I was going to lose today.”

“I came in as a freshman and just wanted to do well,” said Bennett. “I never really thought about winning a state title. I just wanted to do as best as I could. Once I got here, I went for it. I thought my opponent was great. It went all the way to the end, and I was able to pull it out.

“Now that I won a state championship as a freshman, I want to come back again next year and go for another (title),” added Bennett. “This is a great feeling. I can’t even explain it.”

After finishing as the runner-up at 103 last season, the top-seeded Marry picked up just one of a few pins in the finals Saturday.

“I came so close last year,” said Marry. “This was the goal since last season. It was disappointing last weekend (to lose in the Team Final to Clinton), so I really wanted to come back and win today.”

Modert capped a fine career with his third Finals title, having previously won at 103 as a sophomore and 112 as a junior.

“It’s just crazy that it’s over,” said Modert . “I was nervous, not because of the kid but because it’s my last match ever. So I got too scared for it, I know I did. But I still went out there and got it done.”

Johnson capped an unbeaten season after entering this weekend as the top seed at his weight. He was third at 125 a year ago.

“I never want to underestimate anyone. That’s when mistakes happen,” said Johnson. “It feels great right now. It’s been unreal the past couple of days, especially being a senior and No. 1 all year. I just wanted to go out there and do my stuff. If I worried about it, that’s when I won’t do my best.”

Natale had to stop three times due to a bloody nose. He eventually came back to the mat to down Shelby by wearing a taped-over mask that had a bit of a horror movie feel.

A year ago, Natale lost in double overtime in the 119-pound final.

“There was blood the whole time; it was crazy,” said Natale. “I just wanted to go back out there. It was really hard because I couldn’t breathe with that mask on. But I kept battling.”

Natale has had to overcome some adversity — even being sidelined for his entire seventh and eighth grade years from sports due to a serious health condition.

“I had a brain cyst that ruptured (before) my seventh grade year. I had to sit out the entire year, spent six months home in bed, and then my eighth grade year I had to sit out for precaution,” added Natale. “It feels so great to be out here, and that makes winning this so special knowing the adversity that I faced a couple of years ago.”

A perfect season was capped with a perfect feeling for Ward, who finished with a second-straight Finals championship.

“We’ve been talking about it all season that we had two (champions) last year and we could have two this year,” said Ward, who finished a combined 101-1 over the past two years. “We did it. (Teammate) Jaron Johnson is an awesome kid and a great practice partner. He did his part, and I did mine. This is a great feeling and even better having two of us win titles on the same day.”

VanWyk was not the No. 1 seed. But the Lawton senior still persevered and finished on top.

VanWyk posted an 8-5 decision to win his first title. He lost in the blood round at 135 last year.

“I wanted this more than anything,” smiled VanWyk. “I don’t think it settled in until the ref raised my hand. All of that hard work paid off. I still can’t believe it.”

Potter was not going down in his final match.

“This is what I was working for,” said Potter. “I wanted this more than you know. I knew that I had a chance this year, and I went out there and won the state championship.”

After not even qualifying for the Finals in 2019, Holden took a quantum leap toward the podium this year.

“I knew what he was going to do. I had (a feeling I) could get in one of my shots,” said Holden. “I never count anyone out. Don’t think, just go out and wrestle hard.

“This means everything,” continued Holden. “Last year I got knocked out at the Regional qualifiers in the blood rounds. This year I changed my whole mentality. I slimmed down a little bit, got in (better) shape and I was able to win it.”

Nelson and his teammates have faced plenty of adversity this school year — especially losing Nelson’s best friend Tim Rizor in a car crash four months ago. But Nelson battled through the devastating loss to post a perfect 23-0 season.

“I have been wrestling since I was a little kid, and since I was little I’ve dreamt of winning a state title,” said Nelson. “This year I’ve had some bad things happen to me in my life. What means the most to me is I won the state title for Tim Rizor. He was my buddy that died in a car accident last November. He took second at state two years in a row, and I know he would have taken it this year if he had the chance. This was for him.”

One week after helping Clinton capture its first team title, Badge was back at it again winning an individual crown.

He won the Division 4 title at 215 last year, but dropped down a weight and still repeated.

“I just felt better about my performance (being down at 189),” said Badge of his weight loss. “I feel better. I am eating cleaner, not eating junk food and stuff like that. I cut everything out.

“This feels just as good as the first time,” continued Badge, who is 72-2 over the past two seasons. “Now I want to go after a couple of more.”

Seconds after winning, Orr nearly grabbed a few more takedown points by leaping onto his coaches in celebration and nearly forcing them onto the next mat.

Orr, the top seed, more than earned his celebratory rights.

“I did almost knock Coach over,” smiled Orr.

“There’s nothing quite like it, to be honest,” continued Orr, who was sixth at 189 last year. “I went for the reversal and I spun him around and got him on his back. I got in front and was able to take him down. It’s exciting. This is what I’ve been working for all year. When you get it — it’s awesome — and you don’t know what to do but celebrate. That’s why I ran over to my coaches.”

Holding a slim 4-3 lead late in the third period, Lato was penalized for locking his hands.

That didn’t deter the senior and top seed.

Lato came back with an overtime point and captured his first championship.

“(The penalty) doesn’t matter. I got him (in overtime),” noted Lato, who was seventh at 285 last season. “That was my goal, and I was not going to let that bother me and take me away from winning.”