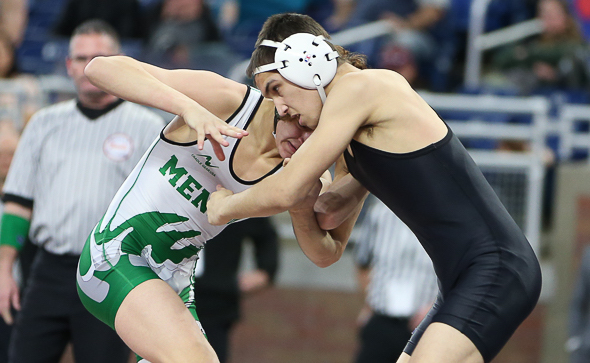 The Mendon sophomore had just won his second Division 4 wrestling championship in as many tries, but looked like he could get right back on the mat.

On a night when two four-time MHSAA champions were crowned at Ford Field, Crespo (55-1) remained on track to accomplish the feat himself, winning a 4-2 decision against Onaway sophomore Matthew Grant (45-5) at 135 pounds.

Watching Lake Fenton’s Jarrett Trombley win his fourth title in Division 3 and Hudson junior Jordan Hamdan win his third in Division 4 immediately before he took the mat wasn’t lost on Crespo. But he was more focused on being as dominant as they were in their victories.

“Yeah, that’s a dream of mine since I was 2, but I’ll just settle for two right now and go for three next year,” said Crespo, who is 111-2 in his career. “I’m not really satisfied with that one, I guess. I’m looking to open kids up more. I see these other kids, like Jordan Hamdan – he’s kind of one of my rivals, also one of my friends – he’s winning by 10 and I’m winning by two. It’s just competition. I want to be there, too.”

Modert had just one word to describe his thoughts as he came off the mat after winning his first Finals championship: Crazy.

“It was amazing, especially at the end,” he said. “Seeing how many people were here, it’s such an amazing experience.”

Modert, who finished fifth at 103 a year ago, led late and was able to get a takedown to seal it.

“My mind was a lot clearer after getting the takedown,” he said. “Just made the match even easier in the end.”

Fry didn’t waste much time claiming his second title. The Manchester senior finished his career with a pin in the first period.

“I just saw an opportunity,” he said. “I had to hammer it and get it done. This shows that my hard work paid off, and I trained really hard. Thank you to my family and friends and teammates that have always supported me to help me get here.”

“It feels good knowing that I don’t really have to cut weight anymore,” he said. “Now I’ll have to start weight training and bulking up.”

Spencer trailed throughout his 119-pound championship match but was able to come up big at just the right moment, getting back points on the edge of the mat in the final 10 seconds to secure the victory.

“My leg was just in tight,” he said. “I felt him going over, so I put my Turk in, got the two back points real quick, and I’m a state champion.”

It was an emotional moment for Spencer, who had lost in the semifinals the previous two seasons.

“This year, I just wouldn’t have it,” he said. “I wouldn’t take anything but gold.”

Torres doesn’t like to hold on in a match, but when an MHSAA Finals title is on the line, he’ll do whatever it takes to win.

The Hudson senior held off a late takedown attempt by returning champion Comar to claim his first title.

Torres finished fifth in 2017, and while he was a Regional champion two weeks ago, he was seen by most as the underdog heading into Saturday’s match.

In a battle of two-time MHSAA champions, Hamdan showed once again that he is on an elite level. The Hudson junior took control early and cruised to a major decision victory to win his third title in as many tries.

“In practice I’m always trying to give my best so I can just keep improving and improving,” Hamdan said. “Then I can be able to dominate more in matches.”

It’s the second straight year Hamdan has defeated a returning champion in a Final. All three of his championships have come with a win against a former or future MHSAA champion.

“I kind of like that pressure,” he said. “It gives me more drive to work harder because I know they’re gunning for me, too.”

Wolford said he was upset after watching his good friend Rogers of Burton Bentley lose his Finals match at 130 pounds, so he did all he could to make sure he didn’t suffer the same fate.

“He’s going to do great at college, and I maybe hope to go to the same college as him, because he’s a great role model for me,” Wolford said. “It made me a little angry, it made me push harder because he’s one of my good friends.”

Wolford led throughout his match, and is now a three-time all-state finisher (fourth in 2017, fifth in 2016).

Kuehnlein went ahead early with a takedown, and while the two points were all he scored, they wound up being enough.

“Coming into the match, I wanted to get that first takedown; that controls the match,” he said. “I did it last night in the semis. My footwork and my top work are probably my best positions, and as soon as I get that Turk leg in, you’re not getting out.”

Hunt tried to go big late and split Kuehnlein, but it wasn’t something the St. Louis senior was about to let happen in his final high school match.

“I like going to those positions, because it’s very hard to get them if the guy knows they’re coming,” Kuehnlein said. “I feel comfortable in those positions.”

Teague didn’t wrestle in the championship match of his Regional tournament, finishing third. But he made up for that when it counted most, knocking off the top two finishers, including St. Louis’ Davis, at the Finals to claim his first title.

“I had to wrestle some great competition this year,” he said. “Gerrit Yates (returning champion from Hesperia, who he defeated in the semifinals) and Jake Davis, top two in the state. I’m sorry to knock them out, but wrestling is a sport where you have to beat the best to be the best.”

Teague took Davis to his back, nearly pinning him early in the match, and continued to attack.

“I just battled through the next two rounds just to get it over with,” he said.

Menck followed in his brother Cole’s footsteps by winning the 160-pound title, almost literally. Not only did Zach Menck defeat a Hesperia opponent in his championship match, like his brother, he did it wearing the same shoes Cole did in 2015.

“It means a lot because the brother and the people I grew up with doing MYWAY meets with, they won (MHSAA titles),” Menck said. “It just means everything to be part of that.”

Menck was a runner-up a year ago, but took control of the match this year.

“I felt very comfortable going into the match, knowing that all I needed to do was continue to push the pace and I would win,” Menck said. “I knew I could go out there and shoot and shoot, and if I persistently shoot, I’m going to take down anybody I go out there against, and that was what I did tonight.”

Cool admitted to being a little winded late in his victory against Carnahan. But he had enough in the tank to pull out the win.

“You lose sight of the stage that you’re on,” Cool said. “Before the match, you’re super stressed out, you’re thinking about everything, but when you get out there it’s just another match. Those nerves make your body weak, so you just have to take a minute to collect yourself.”

Cool held on to a two-point lead for more than a minute in the third period, holding off several takedown attempts from Carnahan.

“I knew I had to keep pushing him; I couldn’t keep backing up,” Cool said. “He wanted to hit that slide-by, and I couldn’t let him get into position to do that.”

Kyle Cassiday didn’t have a ton of time to celebrate his championship before the nerves came back all over again. Not long after he defeated Rizor at 189 pounds, the Beaverton junior was trying to wrap up interviews and watch his older brother, Eric, wrestle for a title of his own at 215.

The Cassidays have two MHSAA championships to celebrate, as Eric also won his match against Bronson’s Gibson. The brothers are the first Finals champions in Beaverton wrestling history.

“My mom’s mind is running a million miles per hour,” Eric Cassiday said when asked how his parents would react. “My dad (Beaverton coach Bryan Cassiday) is happy beyond belief, because he’s coached us since we could walk. He dropped everything he was doing to pick up the youth program, to pick up the high school program, and in my opinion he’s one of the best coaches in the state.”

The brothers also give each other some of the best workout partners in the state, as they’re close in weight. While that can increase the nerves for Kyle in competition, it has been a help for Eric.

Before Schenk, no Mayville wrestler had finished better than fourth at the MHSAA tournament. He bested that a year ago when he placed third at 285 pounds, and he re-upped it this year when he claimed the school’s first title.

“Trying to bring respect to us,” he said. “We’re the smallest school in the state with a wrestling program. I’m just trying to prove we’re not to laugh at.”

There was nothing to laugh at Saturday, as Schenk controlled his match against Overweg and closed out an impressive senior campaign.

PHOTO: Mendon’s Skyler Crespo (left) locks in to Onaway’s Matthew Grant during their championship match at 135 pounds Saturday. (Click for more from HighSchoolSportsScene.com.)