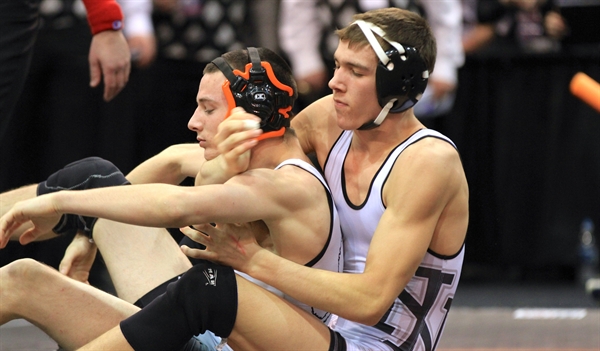 BATTLE CREEK – Gabe Bennett made himself take a few deep breaths at the end of Saturday morning, then had a long talk with his dad, which helped.

The New Lothrop senior has won a lot during his high school career, and placed at the MHSAA Individual Finals the last two seasons. But Saturday morning, although the Hornets moved on from their Division 4 Semifinal, Bennett lost his match – falling to 0-4 for his career for the final two rounds of team competition.

The afternoon’s championship match against Hudson would provide one last opportunity to help the Hornets with a title on the line.

“If you win all the time, you don’t learn a whole lot. If you lose, that’s where you’re able to go back and learn from what you did and why you lost,” Bennett said. “I’ve taken all those times that I’ve lost, and I’ve learned something new – a new move to counter that, or to make my shots better, or whatever I needed to do to make myself better.

“Coming into this (Final) match, being a senior, this was my last one. (I thought) let’s go out with a bang. I did it.”

Bennett’s one-point decision win at 130 pounds got the Hornets even after an early deficit and contributed to what turned into a 38-24 victory and title repeat for reigning champion New Lothrop (29-1), the top-seeded team in Division 4 entering the weekend.

That favorite status was part of how this weekend’s narrative differed from in 2014, when the Hornets came back over the final three weights to upset the then top-seeded Tigers, who had won a record five straight MHSAA team titles.

Saturday’s win was less dramatic – New Lothrop clinched with two weights to wrestle. But this season as a whole was impressive in other respects – notably in how the Hornets dominated after graduating two individual champions who carried the load a year ago.

Bennett was one of four Hornets who won in Saturday’s championship match after falling in the Final a year ago. Junior Cole Hersch won by pin at 125 pounds to put the Hornets on the scoreboard, and Bennett’s 7-6 decision in the next bout evened the match score at 9-9. Sophomore Erik Birchmeier won by decision at 160 to give the Hornets a nine-point lead with six bouts left, and senior heavyweight David Robertson clinched the championship with a pin.

“Last year it felt like we had to get it. We had that good group of seniors that had a chance the three years before that. … That was like their time,” New Lothrop coach Jeff Campbell said. “Last year felt like more pressure. This year, I don’t want to say I surprised, but I was just really excited and proud of our leadership and the way the guys stepped in and filled in after the amazing leaders we had last year graduated.”

“(Bennett had) lost heart-breakers. … So to have him be the one who really got momentum going for us is pretty special.”

Junior Steven Garza II earned a key major decision at 140 pounds to follow Bennett and give New Lothrop a lead it would’ve give back. Senior Trevor Copes followed Garza with a pin to extend the lead to 19-9 halfway through the match.

Junior Caleb Symons was awarded a void at 215 pounds, and freshman Tommy Malloy followed Robertson’s clincher with a major decision at 103.

Although Hudson (23-6) did fall in the Final for the second straight season, it made its seventh straight championship match despite entering the weekend seeded third. The Tigers edged second-seeded Decatur 39-33 in the morning’s Semifinal and climbed within a point of New Lothrop with four bouts remaining.

“We were in a position a couple of spots where maybe we could make a legitimate run at it. But they’re pretty deep up top,” Hudson coach Scott Marry said. “I’m never going to fault my kids for their efforts. They gave everybody on the team, everybody in the community, their coaches, everything they’ve got, and that’s all I can ask.

“They goal is to win it, but sometimes certain things are out of your control. That was a very good team that beat us.”