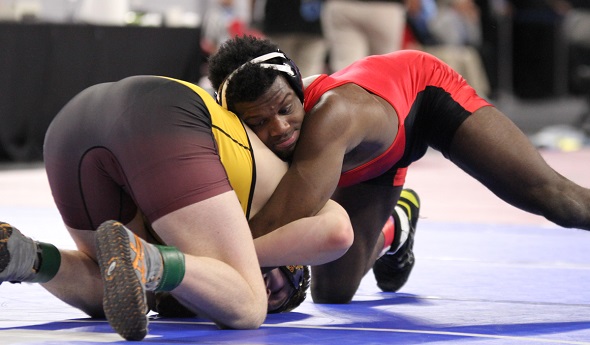 AUBURN HILLS – Warren Lincoln senior Jelani Embree is an explosive and powerful force on the wrestling mat, showing off his superb athleticism.

He showed he is also very smart on the mat, too.

Wrestling an unorthodox style by his standards, Embree won his second straight MHSAA championship by beating Dexter's Will Feldkamp 7-2 in their 189-pound championship match at the Division 2 Individual Finals at The Palace of Auburn Hills on Saturday.

Feldkamp did a solid job of slowing down the pace and explosiveness of Embree, and that was just fine with him.

"I knew going in that he would have a gameplan for me," said Embree, who completed his senior season with a 36-0 record. "I didn't know what it was, but when he decided to go 189, I knew he was training to beat me.

"I didn't take a lot of shots in that match where I usually do. But he was getting me in a front headlock situation. He was trying to slow me down."

LaJoie would have rather controlled his own destiny, but he did say he controlled the match.

"I felt like I brought the pressure most of the match," LaJoie said. "The stalling calls, that is a weird way to win, but I feel like it was definitely deserved. He was backing up and making sure I couldn't get into my offense. But I thought it was a good match."

After winning an MHSAA title last season, it may have been a given that the bulls eye would have been on Gamet's back.

But he used reverse psychology in his match with Mayer.

"He was probably a little nervous, because he was the guy that beat me last year," Gamet said. "I'm positive he was saying to himself I can beat this guy, because I did it last year. It actually helped motivate me."

The psychology worked, as Gamet beat Mayer 4-3 in a tightly contested battle.

"I just kept following him and working his head, and eventually he got tired and gave up that late (two points)," Gamet said.

An emotional Proudlock had a hard time catching his breath and calming his emotions after winning his first championship.

A lifetime of work and dedication was part of the emotion spilled out of him after his victory.

"There is no better feeling in the world than this," Proudlock said. "I have been training my whole life for this. Last year I took second, and I have been working the entire year to do this. This is the best feeling in life."

His runner-up finish in 2016 helped motivate him.

"This has been on my mind the last year," Proudlock said. "I worked hard for this."

LaJoie won his third championship with an impressive offense that put up 16 points. But a less thrilled LaJoie reflected on the match that saw him give up 12 points to Munson.

"I felt like I dominated most of the match, but I kind of went for something at the end and then fell into a tilt and I was kind of mad," LaJoie said. "I have been really looking forward to this, and it was good to end my career with a state championship."

LaJoie said his loss in last year's Final helped get him ready for his senior season.

"That was disappointing at first; I shut down for two weeks," LaJoie said. "But then after that I used it as a motivating factor. I learned a lot about myself, and I used that to drive myself."

"I wasn't watching him because I was focusing on my match," LaJoie said. "But it's going to be pretty fun tonight with two brothers winning state championships."

Returning champion Marten found himself in an unfamiliar place at the start of his 130-pound match.

But like any good champion, he gathered himself and went right after his opponent for a first-period pin and second title.

"I just got back on my offense after being down, got my shot in and turned him, which is what I do best," Marten said. "I threw in the chicken wing, that works in high school, but it won't work in college, so I have to fix that.”

It was a battle of talented freshmen in the 135-pound Final, in a weight class that usually is dominated by upperclassmen.

But the two ninth graders put on a decent show, won by Boone over the previously undefeated Edmond.

Boone, who is used to wrestling on a big stage with a full offseason national schedule, said he was calm throughout his match.

"I think I have wrestled him before this, and it was a great match," Boone said. "I have great coaching. They told me what I had to do, and I went out and did that. Keep it close, because he likes to tie up and go for the outside double leg. And he almost got me with it a couple of times."

But he definitely will take what he earned.

"That was crazy," Raczkowski said. "I did not expect to put 22 points on the board; I thought I would put about six. But my gameplan going into it, stop his little roll, which I did and he didn't have anything else for me so I kept going."

O'Hearon proved that wrestling to the last second of every period is very important in his 145-pound championship match.

At the end of regulation, O'Hearon forced a penalty point on a stalling call, and then came back and reversed Rees in the second ride-out overtime for the win and championship.

Somebody had to lose.

A pair of undefeated wrestlers went at it for the 152-pound title Saturday night, and Fedewa came out on top.

That title kept a St. Johns streak alive, as now it has been nine straight years that the Redwings have had a champion.

McFarland had no idea he had just won a championship.

"I thought I only got the (two near-fall count) and we were going to go into overtime," McFarland said.

But he was awarded a three near-fall count, capping a comeback that saw him down 5-0 but walk off the mat victorious, 6-5.

"I had no idea I won," McFarland said. "I just kept pushing the pace, and I knew that he couldn't hang in there."

It's been a solid postseason for the Marysville wrestling team.

The Vikings made it through the regular season undefeated, advanced all the way to the Team Semifinals, and then on Saturday saw a champion crowned as Bastianelli beat Clio's Williams 5-2.

"This feels awesome, I just wrestled as hard as I could for all six minutes," Bastianelli said. "I was just trying to up the match, and see whatever happens, happens, and just have fun with it."

Humphrey rushed off the mat and jumped into his father Mike Humphrey's arms after winning the 215-pound championship with a tough 3-2 win.

"I have been waiting for that leap in my dad's arms for 14 years," Humphrey said.

And thanks to a late takedown, he earned the opportunity.

"I knew he wasn't going to do anything flashy," Humphrey said. "He is a solid wrestler, but he does a lot on defense and that made it hard to work my shot in that I was getting in my earlier matches. I got one, though, and that was enough."

Beard he knew he had to do something different.

Two weeks ago at Regionals, he lost a tight decision to DePiazza. And Saturday night, those two found themselves wresting for a heavyweight championship.

This time Beard got the best thanks to a stalling penalty point awarded to him late.

PHOTO: Warren Lincoln’s Jelani Embree (right) takes on Dexter's Will Feldkamp in a Division 2 Final at 189 pounds. (Click for more from HighSchoolSportsScene.com.)