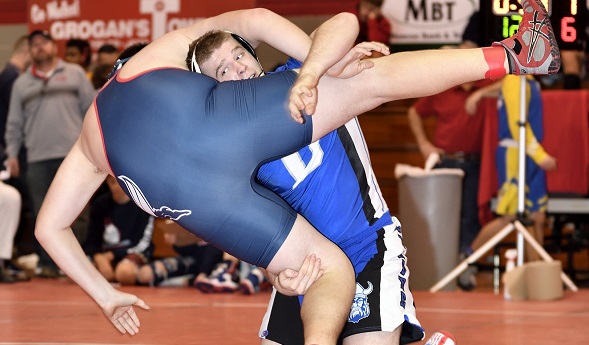 Whitman is fast approaching an opportunity to join one of the elite groups of achievers in any sport in MHSAA history. With a chance at becoming the 23rd four-time individual wrestling champion a little more than a month away, Whitman continued his undefeated run of this season by winning the Most Valuable Performer at the upper weights at last weekend’s Hudson Super 16 – earning this week’s Michigan Army National Guard “Performance of the Week.”

Whitman, wrestling last weekend and mostly this season at 215 pounds, and occasionally as a heavyweight, is 27-0 this season and 180-3 over his high school career. He is ranked No. 3 nationally at 220 pounds by InterMat, with MHSAA Division 3 championships the last two seasons at 189 pounds and a win at 171 as a freshman. His most impressive victories this winter arguably are against Cody Howard of Lakewood St. Edward (Ohio), a nationally-ranked 195-pounder headed for Virginia Tech, and twice over Temperance Bedford heavyweight Austin Emerson, another nationally-ranked foe who will continue next season at Eastern Michigan University. Whitman also earned the 100th pin of his high school career in Wednesday’s dual meet win over Hudson.

Dundee as a team is ranked No. 1 in Division 3 this season and competing for its fourth MHSAA title in six seasons after finishing runner-up at last year’s Final on a tie-breaker in the championship match. Whitman will continue his academic and wrestling careers at the University of North Carolina. He carries a 3.9 grade-point average and intends to study physical therapy.

Coach Tim Roberts said: “It isn't about him. It's about all of us. He's doing his best to get better, and his ego has never gotten in the way of his success. He’s endlessly getting better, (asking) ‘how can I learn more about this sport and get better?’ I feel lucky; I’ve been able to coach a lot of great people, and he ranks as one of best people inside and outside of it. … Watching him come out of his shell more, how he treats other people, it’s great. As a freshman he was really good, obviously; he’s even better now. Even yesterday, he was asking questions trying to get better. It’s very impressive, how he handles himself. I’m just really happy I’ve had the opportunity to have this four years with him.”

Performance Point: “It’s been fun. I’ve been trying to get the best matches I could get so I can see what areas I need to improve on. … One of the big things with Emerson is I learned that I need to relax a little bit more. In some of those bigger matches, I tend to go out and try to sprint pretty much the whole match – and I get tired towards the end because the body’s not really meant to sprint for that long. The first time I wrestled him, I went out there and I got a takedown right away, took out a lot of energy. The second time I was a lot more relaxed. I picked and chose where I went and made my attacks, and it worked out a lot better. I ended up beating him 8-1 instead of 3-2, and I felt like I competed and I was able to go a lot longer than I usually am.”

On the verge of history: “It’s nice. It’s cool. But the ultimate goal is to just to keep getting better and better, and improving where you need to improve. Being the best that you can be. It will set goals for other kids coming up to try to work towards that and try to beat my records. That’s kinda cool.” 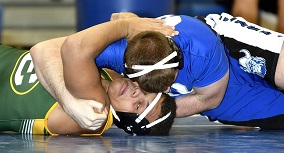 Humility counts: “(It’s) just the way I’d say my parents raised me. Nobody really likes when kids are cocky. They like a humble person who can compete at high levels but they are nice to people and can carry themselves well, and that’s how I’ve been raised.”